We talk with Grant Davies of Endgame about the DS and 3DS title. 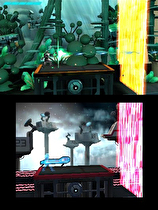 Much like its core gameplay conceit, Fractured Soul has fluctuated from ethereal to corporeal and back again over the course of its lifetime. Originally conceived as an Ikaruga-like shooter that would split its binary gameplay between the twin screens of Nintendo's recently announced DS, the game—titled Slidatron at the time—hit innumerable snags on its way from conception to reality.

We recently had an opportunity to speak with Grant Davies, Managing Director at developer Endgame Studios, about the long and unique life of Fractured Soul.

Note: Grant posted a blog divulging in detail his experience making the game. It's an insightful story and an excellent primer for this interview, and I strongly encourage giving it a read.

Nintendo World Report (NWR): By the time a prototype of the game reached development (a process hindered by money and outside mismanagement), the shifting mechanic of Slidatron had been transposed from schmup to platformer, a decision bolstered by previous experience with the genre and the uniqueness of pairing it with the duality concept.

You mentioned having beneficial exposure to the genre, including handling the Rayman 3 source code. What principles or practices did you draw from these experiences during the design process? Have you kept or altered any of them throughout the course of development?

Grant Davies (GD):Two of the main areas we feel we benefited in from working closely with a AAA platformer like Rayman 3 were the player handling and camera. As a player, you can immediately tell the difference between a game that has had a lot of attention paid to its player handling, and we felt this was an area that we should devote a lot of time to. It did help to see how these games approached these problems from a source code point of view, though the main benefit was just playing the game so much that we could instantly tell any areas of Fractured Soul that weren't measuring up during development. Regarding the camera, we definitely borrowed some concepts from Rayman 3 relating to the stability of the camera to assist the player as much as possible in making difficult jumps. In the 3DS version, we took the camera a step further and implemented a path-based system to give even greater control over the parameters of the camera at any given point. It took a lot of development time to implement this, and it's something that if it's done right the player won't even notice. But these are the things that are important. We also took a lot from Mega Man in these areas, too.

NWR: A quandary you note early in the development was determining the difficulty curve for the screen-switching concept, and how the level of it you settled on precluded the interest you expected. From what we've seen, the mechanics of Fractured Soul still require a certain amount of skill and quick thinking. How did you go about pinning down the right amount of difficulty, especially with a concept many are unfamiliar with?

GD: There's no backing away from the idea that Fractured Soul is a core game—and we're unapologetic about that! We're reaching out to folks who have grown up with classics such as Mega Man and Castlevania. We didn't want to water down the content to the point that these gamers found it too easy to beat, but at the same time we needed to acknowledge that we're bringing an entirely new dimension to the genre, and therefore the game needs to introduce the player to it gently. After the first world, things heat up a bit, and then there's the challenges to get five stars on every level, and speedrun online leaderboards for the hardcore folks.

NWR: Do you feel like the market for a game like this is more open now, with the increased age of the systems and the familiarity people have with them?

GD: Definitely, and it's only come back in style in the last 5 years. Prior to that, platformers were shunned by publishers for a long time, but after the huge success of Braid, Limbo, Super Meat Boy, Cave Story, etc., they seem to be back in vogue. Our core audience will be adults now, gamers who have grown up with the classic platformers as kids, and within the entire gaming market, it's a niche. It's not going to have the widespread appeal of a Farmville or an Angry Birds, but I think those folks who grew up playing Mega Man and Castlevania will really get a kick out of it.

NWR: Much of the struggle to release the game—first as Slidatron, then Fractured Soul—seems to have come during the publishing process. In one instance, you mention how the development side of a company was all for taking on your game, since they believed in the fun and uniqueness of the concept, while the marketing side was against it. Was there anything you took out of this experience in terms of a business/creation relationship?

GD: Sure—this incident occurred when the game was still Slidatron. We acknowledged at that point that we had a branding issue, so we rebranded to Fractured Soul. These days we consider marketing before we make the game—nail down our target audience from the start, and aim to create the branding and experience around that. Slidatron was seen as a kids brand, and to a large extent it was, which was foolish on our part on several counts, not least of which because it was obvious from the start that the folks we were making the game for were gamers like us—adults in their 20s, 30s, and even 40s, who all grew up playing platformers.

NWR: If you were pitching Slidatron for publishing today, would you try to take it in a different direction for release (for example, a digital platform like the eShop or Steam)?

GD: Definitely. I believe digital delivery is the future for us, if not the entire industry, and we'd love to bring Fractured Soul to PC online stores, XBLA, and PSN in the future. Being a core game, I believe it would work really well on these platforms. I think the only barrier to these markets is the transaction model—at the moment the PC marketplace in particular has got this right and it works really well.

NWR: You mention that much of the development for the DS version was complete in 2010. What led to the creation of a 3DS version?

GD: From the moment we heard about the 3DS, it was obviously going to be a natural fit for Fractured Soul, with the greater power of the machine allowing us to make it entirely in 3D, and the online facilities allowing leaderboards, which was a feature we always wanted to put into the game. In contrast to the DS version, signing a 3DS version to a publisher did not take long at all—in fact, we had more than one publisher looking to pick up the game. I guess after seeing the DS version it was a fairly obvious fit for the 3DS.

NWR: What, if any, kind of alterations were made to suit the new platform? Were there any significant difficulties in the process?

GD: Gameplay wise, it was actually a fairly pain-free process, and the 3DS playing experience is very similar to the DS. We remade the artwork from the ground up, though, all in 3D. We also re-did the camera system to use a path system. The benefit to this is that we can control where the camera is at every point in the game. That is, there is no point where the camera will get wedged into a wall or stuck on a weird angle like some 3D games have. At every point, we can control the zoom, angle, look-ahead, and speed of the camera. This took a long, long time to implement and test!

NWR: How would you compare development on the 3DS to the DS?

GD: The 3DS was a much bigger effort with a larger team—Fractured Soul has a heavy art demand because it's over 30 levels and then it's across both screens. Also, being on a new platform, the engine was being developed in parallel with the game, which made it difficult to assess what level of detail we could cram into the device. Since both games play the same, we didn't have to do any new design for the 3DS, which made things a lot easier. Designing on a game like Fractured Soul is a massive time investment.

NWR: With its impending release, what are your feelings on the game's legacy? Do you have plans or ambitions to continue the series?

GD: I believe that it will strike a chord with core gamers who love classic platformers. Fractured Soul is one of those games where the developers and the players are the same—that is, we made the game because we love these kind of platformers too, so in that sense it's easy to measure the quality of the game we've made. It's the sort of game we'd all buy and enjoy at Endgame, so I hope there are other folks out there that share our passion for classic platformers.

As far as the future goes, as much content as there is in Fractured Soul, I feel like we're only just scratching the surface of this duality idea, and there are certainly plenty of puzzles and ideas that we were forced to hold back because we simply didn't have the time to do them this time around. So I'd love to be able to make a sequel—and that will depend on how this game is received. I'd also love to get Fractured Soul onto other platforms—I think it's a perfect match for PC digital, XBLA, and PSN.

Been following this one for a while! 3DS screenies look great. Do we actually know when's it out?