RPG Maker MV Is a Powerful but Complicated Tool

You can make your own game, but you better be ready to work.

I’ve been looking at this menu screen for the last hour, and I cannot figure out how to hide the party. I’m sure you can; the third-person omniscient cutscene is a hallmark of RPG storytelling.

It’s got to be here.

Google tells me to set “Transparency” to false as part of an event, but these are instructions for RPG Maker XV, and that’s a different product altogether. Nobody in the English-speaking world has MV, and there certainly isn't much in the way of a useful tutorial available. I tweak a setting, run the demo, and my slack jawed party hangs out in the corner. Eventually an errant press of the shoulder button reveals the dark secret: three more pages of menu options. Finally, my party is hidden. 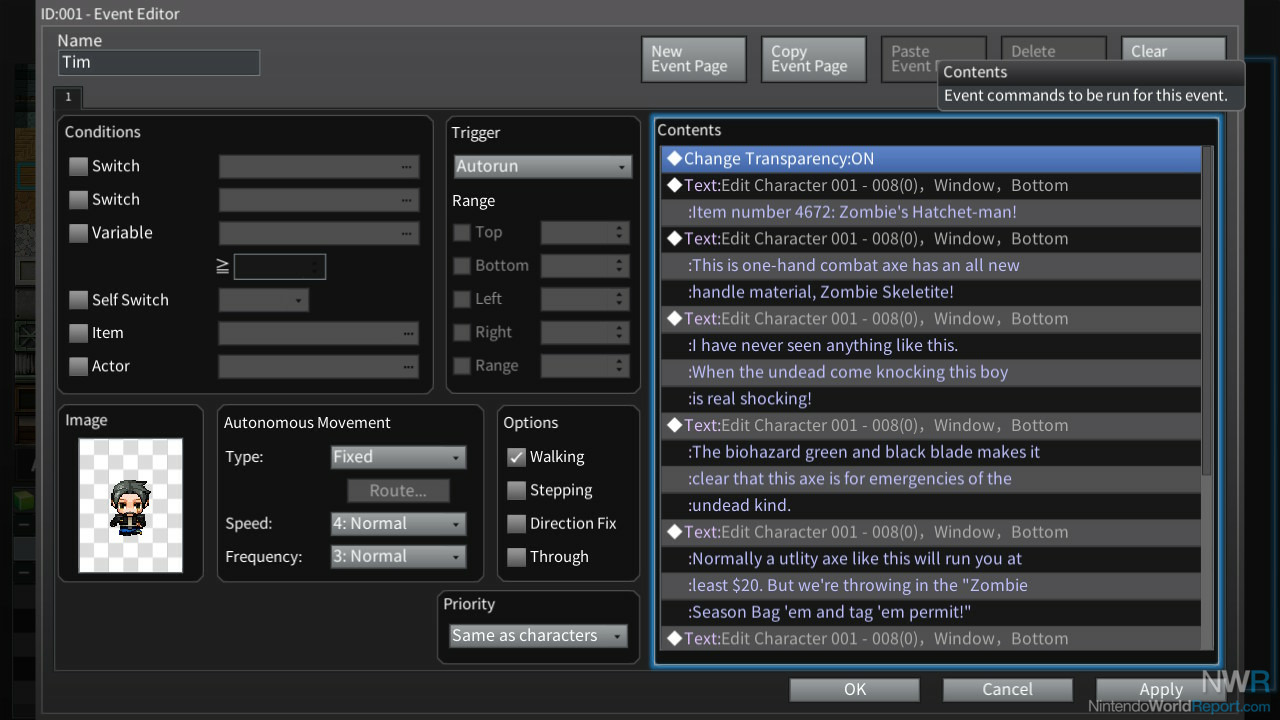 Now I just need to actually make my characters.

That’s the RPG Maker MV Experience. I’ve already seen that this is a powerful tool, and I’ve dutifully recreated the set of Internet Performance Art Cutlery Corner in alarming and exacting detail.

My kinks are my own and I will not be judged for them.

But for every drip of empowerment is overwhelmed by an entire pitcher of complexity. A laughable tutorial asks you to place some flowers, script the exit to a room, and lower a slider on some enemies before turning over the keys to the Saturn V rocket and gesturing wildly at the night sky. “You know, up there!" 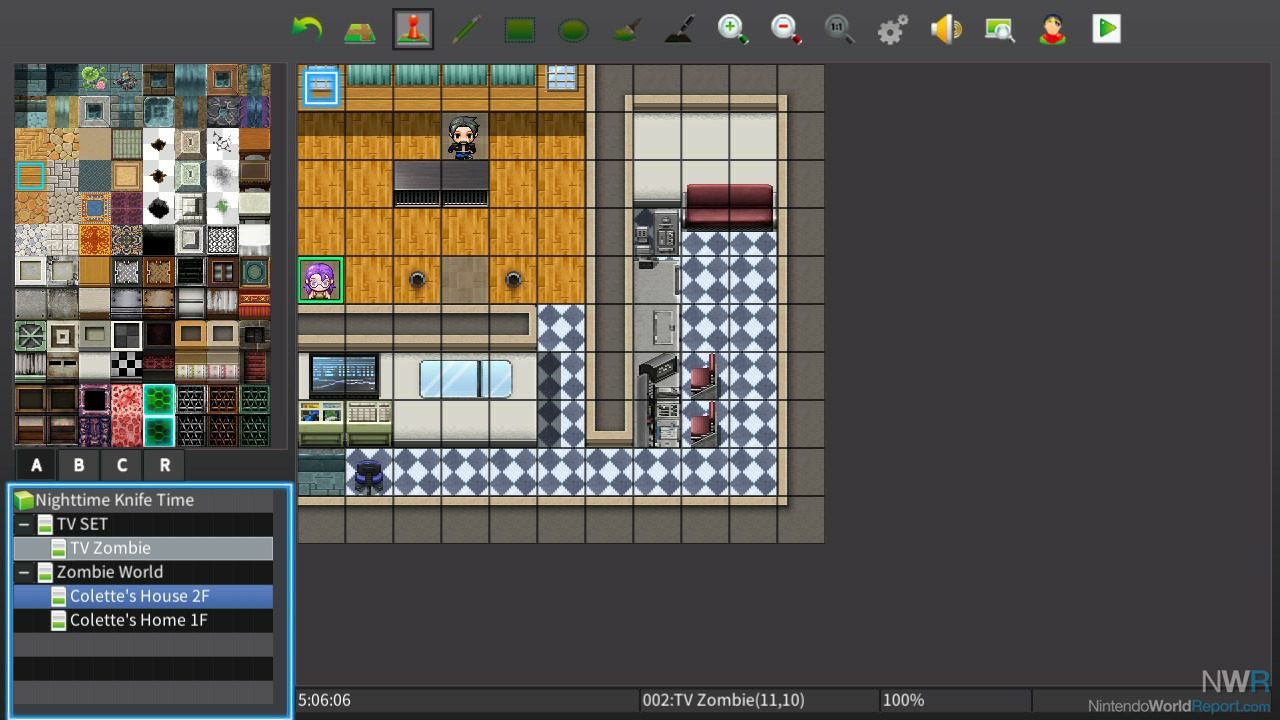 Frustratingly, none of the online sharing was enabled for most of the review window, so I couldn’t see what other members of the press had been able to hew from this tool. My hope was that I could deconstruct some “finished” products to see how certain things are done. I’m a software developer by trade, and I’ve described that job as being extremely proficient at Google and moderately proficient at hiding it. This is how things are done, but with posting offline for most of the review period, this option was unavailable.

It’s entirely too soon to review RPG Maker MV. With about seven or so hours of furiously hunting, I’ve scripted a grand total of three screens. Unable to share, unable to play others’ work, and unable to process this product, I still have a way to go to render judgement. I do have some early thoughts.

Firstly, it takes a tremendous amount of time to do just about anything. I accept there is a learning curve to this process; complex tools get faster with practice. However, just navigating menus, even when I know where things are, is a multi-hand operation. Paging through menus is a task for the left hand while selecting submenus goes to the right. 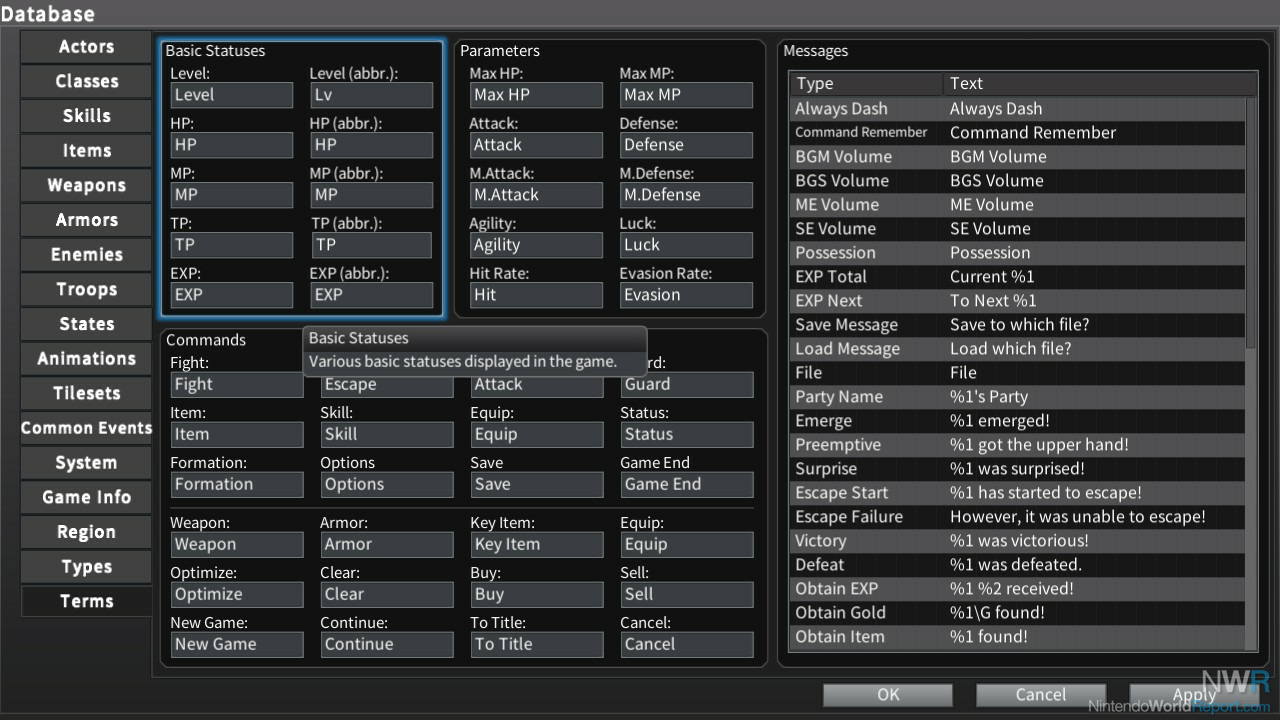 Text entry using the Switch’s on-screen keyboard is a joke, but thankfully they’re using the bone-standard Switch prompts so an option for a USB keyboard is available. Sadly, RPG Maker MV makes no use of the mouse, something that might have fundamentally changed how I feel about the menus. The touchscreen does work, but that presupposes you’re playing undocked, which also means likely sacrificing the use of a keyboard. Add to that the fact nothing scales for the small screen on Switch and I’m now down to gingerly trying to use my Vienna Sausage fingers to tap a tiny button with surgical precision. It’s hard to escape the feeling that this platform might not be ideal for the tool. I understand the series’ long history on consoles, but the developers might be shocked to learn that it isn’t 1995. Better options are available. There was a 3DS RPG Maker, which I presume is a product built by sadists for the exclusive benefit of masochists.

None of this is impossible. I had a breakthrough after over an hour of just trying to get the floor to release my character from an invisible prison. You can watch the suffering in the below video.

Following my revelation, I was able to steam through creating the first house of the game in about an hour. The scripting was working, I was navigating menus with only one error per action, and I was actually seeing playable results. After this highly productive, highly uplifting hour, I stopped to see what I had made.

I have grown to appreciate the Character Creator system, which lets you match components to create a good looking cast for your game. I was able to quickly zip through a family and craft the faces I saw in my mind. Assigning a created body and face to characters is easy, but then when you select the character "talking" during dialog it doesn't automatically select that character's portrait, which seems to defeat the entire point. 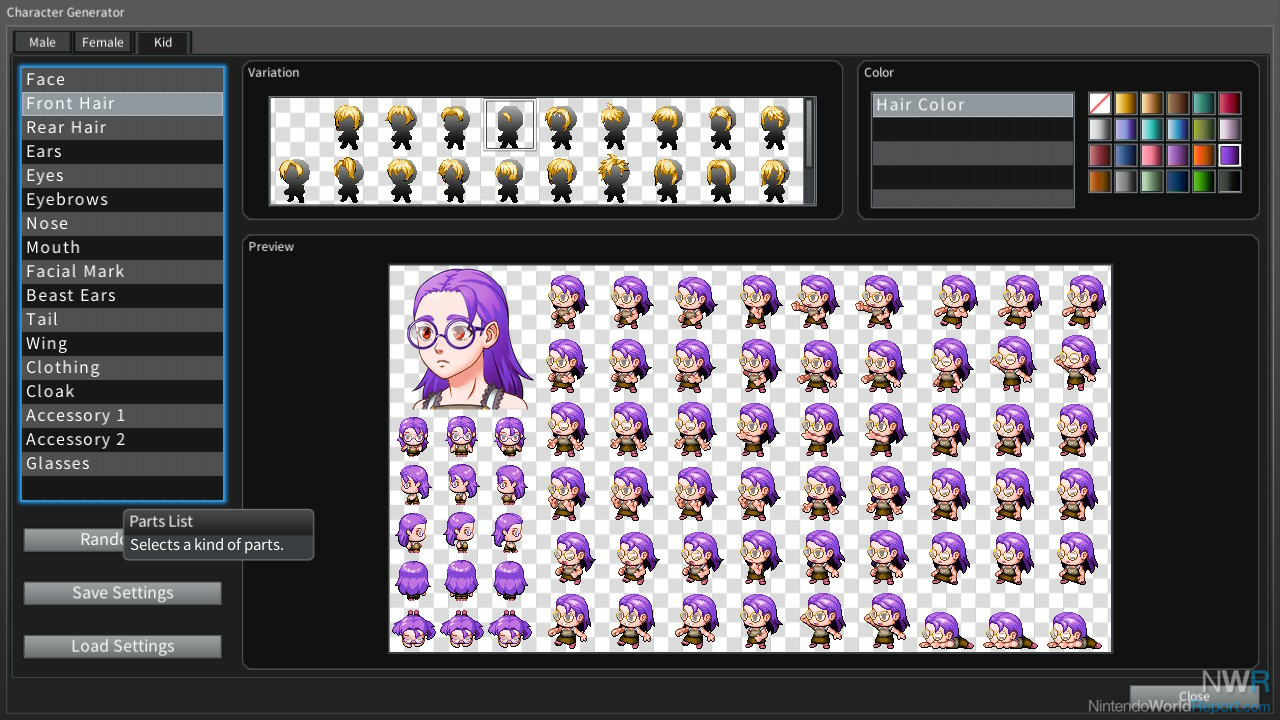 I've started tweaking the "RPG Lingo" of my game, changing what "skills" are called and erasing magic from the entire ecosystem. This is not a land of fantasy, it is a land of knives.

And lo! The knife skills were arrayed in razored respledence.

That's what's so impressive about RPG Maker MV: everything can be changed. This tool can be used to create any number of unique and interesting games. In patient and creative hands, MV has the potential to be unlike anything else on Switch. Oh sure, you can create worlds in Mario Maker, but this is beyond that. Nothing will come fast, but the creative depths that will be explored with MV outshines any Mario making. The price is time, and hopefully people who get RPG Maker MV are ready to make that exchange.

There’s a very long way to go before I master this tool, and much further still to produce anything approaching a playable game. But once I have something built, something I can be proud to share, I will be able to review RPG Maker MV properly. For now, you can look for future updates in this space as I keep crafting my opus: Nighttime Knife Time.

I love the fact that it starts on Culinary Corner