Calico is a Game About Magical Girls Running a Cat Cafe

Quick! Get on the orb cat! We have a cat cafe to run!

Sometimes the best game concepts just come out of the attitude of “We can, so why not?” After speaking with the developers at Peachy Keen Games about their upcoming game Calico during PAX East 2020, it struck me just how much of their development philosophy was pretty much just that one sentence. As I played the demo they would consistently tell me about how specific features were implemented because of a shrug and a “sure,” such as the menu screen featuring countless cats floating in the air, which they told me was the result of them realizing they could load a 3D model into a particle emitter. This mindset has resulted in a game that’s not much, but what is there is incredibly charming and adorable. 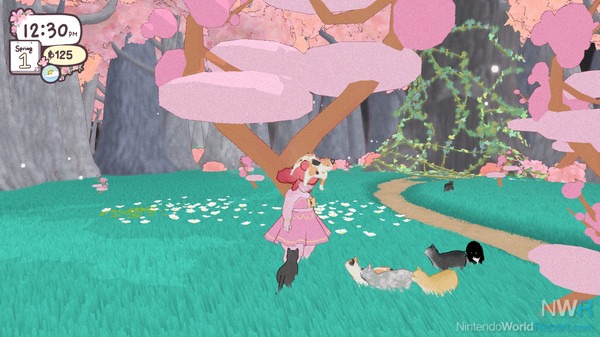 The developers describe Calico as a game about magical girls running a cat cafe, and that’s basically all the information you really need right off the bat. Calico is a very laid back game, and in the demo specifically, the cat cafe was already crawling with the little felines. The devs told me that in the actual game, players will have to collect the cats to populate the cafe on their own, and populated it was. There were tabbies, black cats, rainbow shimmering cats, and even a giant cat. The regular-sized cats can be pet, played with, picked up, or even placed on your head like a hat (something I particularly enjoyed). The giant cat could be climbed on and ridden as a mount, allowing you to move through the game’s open world much faster than you could otherwise. You can even put a cat on the giant cat’s head, too! They made sure to mention that there would also be other animals like dogs and red pandas if those were more your thing.

The game also features a shop, run by a cat who lives in a dumpster behind a house, that sells you furniture that you can use to design your cafe. You can purchase this furniture using beans, the in-game currency, which you earn by completing jobs for the people that live in the area around your cafe. For instance a witch that lived on top of a mountain asked me to find her cat, a black cat with bright green eyes, and another lady asked me simply to walk her cat who was all worked up and hyper. On the way, I found other types of mountable animals, such as a giant red panda who ran on his hind legs as well as a round orb-shaped cat who I could roll on like I was playing the cutest/dumbest game of bumper balls. The devs were sure to tell me that in the final game, the player would have to use varying types of potions on these animals to increase their size, turn them into the orb creatures I have grown to love, and other things as well.

Overall, there’s really not a lot to Calico, and it’s certainly not going to be a game that’s for everybody. If you enjoy games like Animal Crossing or Harvest Moon, this might be one to look into, and if you really like cats, this is probably one that you’re going to consider a must-buy. At the end of the day, on my end, any game where I can roll on a cat like the world’s cutest katamari is a win for me. What this game lacks in challenging gameplay it more than makes up for in cute charm. I, for one, am excited to see where Calico goes when it fully rolls out.

Calico is currently set to release on Nintendo Switch and other platforms in Fall 2020.