Harmonix is putting that Dropmix tech to really good use.

Since their beginning in 2001, Harmonix has been known as the studio most dedicated to creating new and unique audio experiences; from Amplitude and Guitar Hero, to Rock Band and Dance Central, every game they put out seems to use music in a new and interesting way. Their upcoming game Fuser is no different, taking the technology they developed for their foray into tabletop gaming and amping it up for a full return into the world of video games. At PAX East 2020, we were able to go into their incredibly impressive booth (complete with a DJ stage, a large golden statue, and pyrotechnics) and give the game a try for ourselves.

I actually happen to own a copy of Harmonix’s previous big release, DropMix, complete with the board and cards. I’ve played it a few times and while the card game is pretty fun and the mixing and matching of song parts is incredibly impressive, lugging the heavy board and all the cards around if you want to play is less than ideal. Fuser takes the DropMix technology and does away with the inconvenient physical parts, creating a more easily transportable and video game-y experience all around. In Fuser, you are taking control of a DJ whose job it is to please the crowd, with a selection of songs from various genres and time periods at your disposal. The demo we played contained just under 20 songs to work with, including Blue Oyster Cult’s “Don’t Fear the Reaper,” Smash Mouth’s “All-Star,” Billie Eilish’s “Bad Guy,” and more. The final game is set to include a selection of over 100 songs. 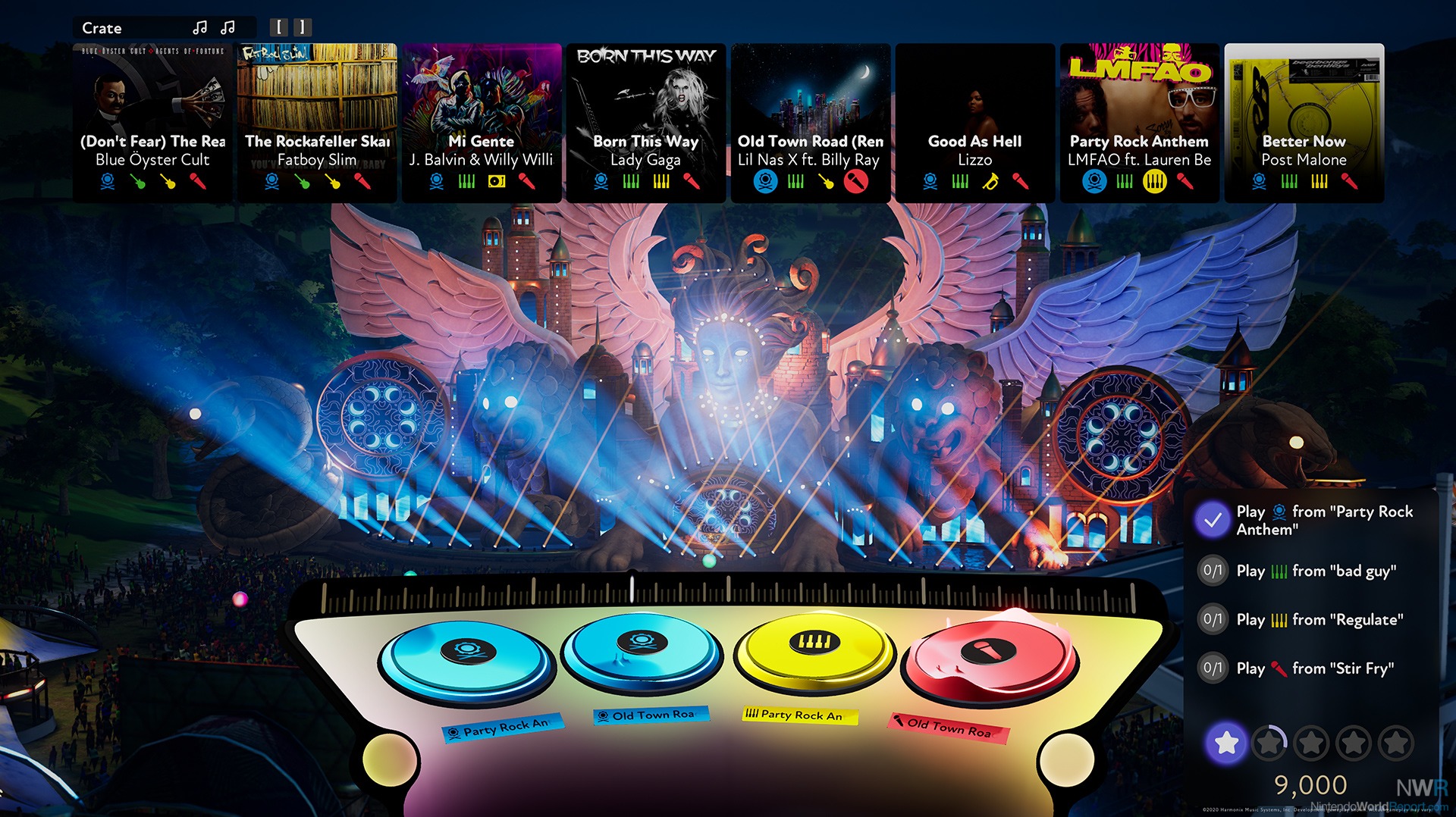 To start the game, you put your cursor on top of a song, which will display what parts of the song you can add to your mix. Options usually consist of vocals, a guitar or bass part, a drum part, or a keyboard melody, though these can vary depending on the song. You select one of these parts using the face buttons, and can drag that record on to the mixing board. Mixing and matching these songs remains an amazing show of Harmonix’s tech, as parts you add and replace will be altered to fit perfectly in whatever mix you’re creating, whether that be by putting it in a different key or changing the BPM. On paper, this sounds like it would make the music sound horrible, but every single change the game made sounded almost like the new key or speed was the way it had originally been recorded. In this way, the goofiest combinations (the entire weekend I never walked by this booth without hearing some form of “Bad Guy” fused with “All Star”) can somehow become absolutely amazing songs.

Fuser also adds more of a rhythm aspect than DropMix had, with point bonuses given for dropping a new part into the mix on a downbeat, something that is shown through a rhythm counter located above your board. Throughout the show, the audience will begin to request changes to your mix, such as slipping in more of a certain genre or adding more of a drum beat. By completing these requests as quickly as you can, you can rack up points fast, with the end of the session giving you a final rating out of five stars. As somebody who enjoyed my time with DropMix, I’m overjoyed with how cool Fuser seems to be shaping up. I am looking forward to seeing the final product, and if you enjoy music or music-based games, you really should be, too.

Fuser is set to release on Nintendo Switch and other platforms some time in 2020.