Five legions, two main characters to choose from and one chain. The intel on Platinum's lastest inside! 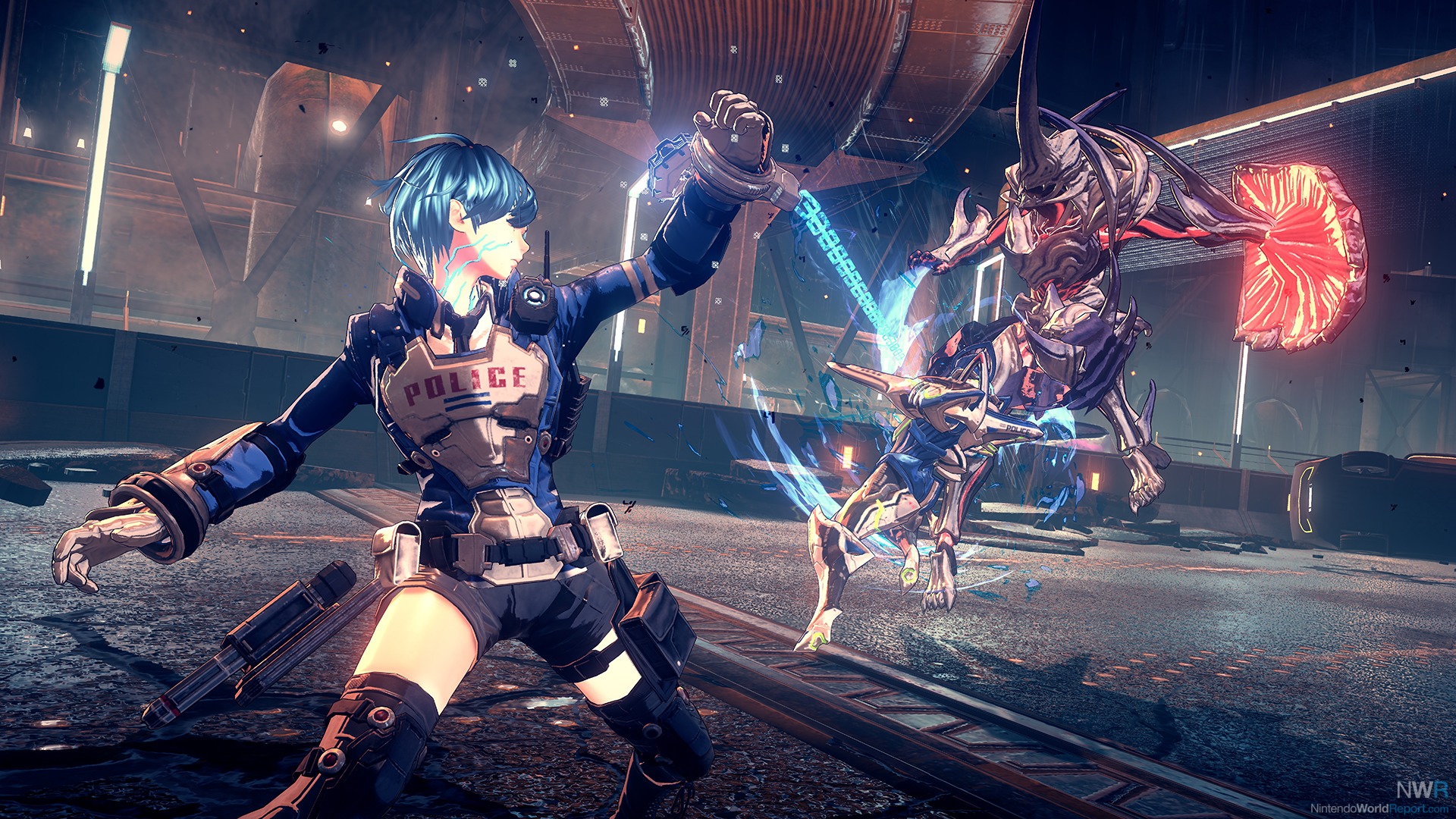 Platinum Games is one of my favorite developers, full stop. The love and care they put into their own creations is staggering. These include action games like Bayonetta, The Wonderful 101, and NieR: Automata, all of which I simply can't stop playing. Each of these titles has its flaws, but that doesn't stop me from smiling all the way through. The larger than life cutscenes and bonkers gameplay ideas mostly gel with me. From the get-go, though, Astral Chain seemed complicated. Far from making it a bad game, but something that would muddy the water by bringing too many ideas into a singular system. Had I reason to worry? Not exactly. It is true that new things are constantly introduced, but none take away from the actual experience.

Astral Chain takes place in the futuristic year of 2078. The human race is falling apart after an apocalyptic event took place 40 years prior. Horrible beings, known as Chimeras, have polluted the land and made large parts of the Earth uninhabitable. The survivors created the ARK, a beacon to keep the fragments of humanity together. Even there, however, humans aren't safe from the threat of Chimeras and the Red Matter they spread like decay. A special task force, known as Neuron, steps up to the plate with modified Chimeras known as Legions. You, the player avatar in the story, can take control of all Legions and quickly become the person who is destined to save those who are still alive.

From the opening moments, Astral Chain knows how to make a strong first impression. The game intentionally keeps you in the dark about characters, story progression, and gameplay bites until you absolutely need them. There is always an intrigue about what is lurking around the corner, which entices you to keep going. The story is split into chapters, known as Files in the game, and always leaves you with a cliffhanger. What helps is that the characters are well written, making you want to see story arcs being played out. The Neuron squad mates initially seem kind of walled off, but they open up as you assist them. The only thing that distracts from all of this is that the English lip syncing really isn't any good. It is clear that the syncing is based on the Japanese audio track, which bums me out really badly.

As the game is split into chapters, don't expect an environment with a lot of space to move around. While the pieces of the world are wonderful, they aren't as deep as you might think. That being said, there is enough to do if you want to 100% a chapter. Missions see you starting in an exploration phase, where you are trying to collect clues about what is going on. The player will follow Chimera tracks, talk to various NPCs, and partake in a variety of side missions. These can range from capturing thieves to finding certain objects. It is even possible to find secret Chimera hiding spots, where you partake in some fast-paced battles. Ultimately, once you collect the information you need, you will have a wrap-up talk where you select the key phrases. For some additional experience, it is a good idea to be a sound listener and piece things together. 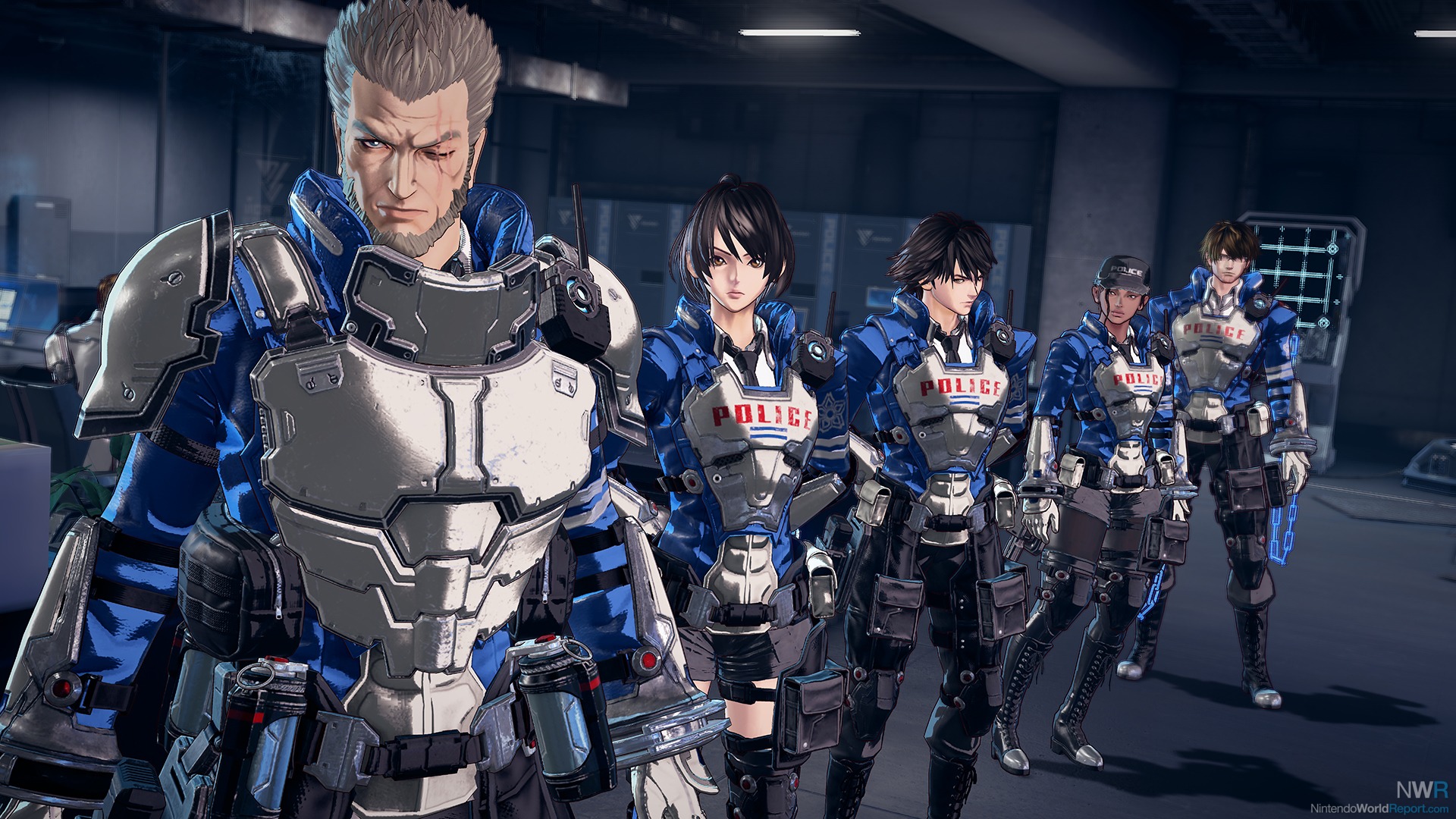 The wonderful thing about Astral Chain is the gameplay diversity. It hits the key elements in every chapter but always manages to incorporate a twist. Sometimes you will head into a Chimera dimension warp (called a Gate) early on, and find a risky encounter. Once you return to the ARK, however, the situation worsens and forces you to up your game even further. Another chapter employs a long investigation and minimizes the stuff you do beyond the Gates. Regardless of that, the player will always talk, interact, and fight. I feel compelled to do exhaust all of my options because it is simply a joy. If you are lost for a moment, the onboard computer tells you spots of interest to keep you going.

The Legion are the driving force in keeping all the proceedings entertaining. They are companions that help you in all kinds of situations. These evil looking friends can listen in to conversations, bind criminals by circling around them, and find the track of any Chimera in a nearby radius. The individual Legions each have their own abilities as well. Take the Beast Legion, for example: by letting them smell an item, they will follow the scent for more items of those in that particular family. My personal favourite, however, is the Arm Legion. By pressing the L-button, you can wear this beefy beast as a suit of armor and fly over any dangerous looking terrain. It creates some fairly entertaining field puzzles that you have to deal with before continuing ahead.

The Legions also tie into the combat of Astral Chain. The game features a synergistic system that allows you to control both the main character and your Legion. To begin, the player can attack with special X-Baton weapons that you can upgrade over the course of the game. In the beginning, you will freely switch between a gun and two types of swords. The player character is fast and can dodge at the very last second. By getting the timing down, you can learn to instantly strike back and do more damage. This is particularly handy if can move behind your foe as that dishes out some serious pain. 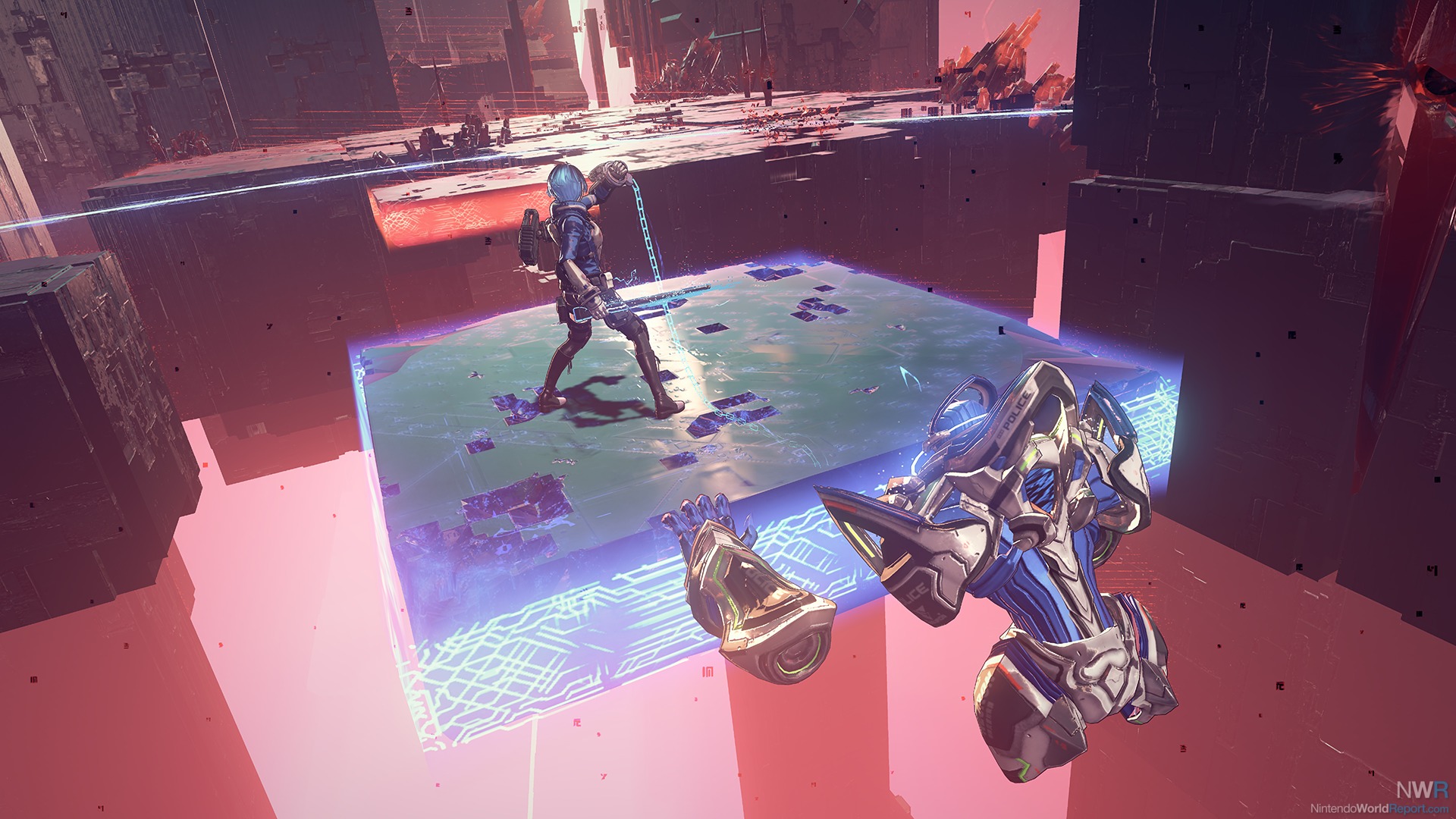 Each Legion also features its own combat style that is fairly fun to experiment with. The Sword Legion strikes hard and with a certain finesse. If you can upgrade the right abilities on its skill tree, you will get an unstoppable force of power. While you can control the Legion's every move, they mostly attack on their own, but even that has a few exceptions. For example, you can use the chain to bounce your opponents back or wrap them in chains. With the Arm Legion, you can hop in the same suit as before and pummel hard as a singular unit. Combining your attacks does take a toll on your synchronization meter, which depletes the longer a Legion is out on the field. After a bit, it needs to recover before helping out again. By striking a few times as the main character, the bar refills in no time flat. This is a different approach to say Xenoblade, where it feels like you are more of an observer. You are actively encouraged to attack together in Astral Chain.

The thing I didn't look forward to with Astral Chain were the controls. With a game like The Wonderful 101, there was a learning curve present that I couldn't ignore. Astral Chain does introduce a lot of elements, and there is no denying that fact. Fortunately, it builds everything up in a very natural way. You will start with no Legion, learning the ropes of moving and X-Baton combat. After that, you will take your first baby steps with the Legion and learn the moves of combat with your partner over the next couple of chapters. It gives weight to the new moves and options, which is the hallmark of a strong game. Before I knew it, I was bringing my character into position, all the while shooting the Legion out in a completely different direction. All of the actions are so incredibly rewarding to pull off, and it makes you appreciate the amount of stuff you can do. Primarily, I am pleased that I got to learn what every Legion had in its arsenal, which Astral Chain takes into account as well. The title gelled a lot better with me than I had ever hoped for.

When it comes to Astral Chain's looks, it is quite lovely. The game offers striking visual set pieces that bring the ARK to life very well. I do feel that the Chimera set pieces look very similar to each other, but it works as a grim world without any sort of hope. That being said, you will spend a lot of time around them, so it counts for something I reckon. Beyond that though, the character models and overall presentation is just very lively and colorful, which makes it a great fit for Nintendo Switch. There are some frame rate hiccups, but most of the time you really won't notice them much. The soundtrack, on the other hand, is absolutely fantastic. I adore the theme you hear while walking through the Neuron command rooms. There is a strong focus on the beat that is just really appealing.

Overall, Astral Chain has been interesting to say the very least. The action set pieces and gameplay are really stellar, and they showcase some of Platinum's finest work to date. The Legions in particular are a far bigger deal than I imagined, and steal the thunder above all else. The Arm Legion is my personal favorite, both from a field and battle perspective. There are some missteps so far, like the bad lip syncing and some frame rate dips, but those can be overlooked. The flow of Astral Chain is just so thoroughly engrossing that it’s all I can think about. Astral Chain releases in just a few short weeks on the 30th of August.

This preview is getting me hyped. Not enough buzz for this game.