One game started it all. Head back into the original game and see the colorful ghosts that await you!

When I name my top Nintendo GameCube games, the conversation quickly lands on Luigi's Mansion. It is an oddity in the system's library that remains entertaining after many years of play. There is something satisfying about moving Mario's green brother about and capturing ghosts at every step. Over the years, I learned to appreciate the game for how concise and compact it is. You move from room to room, handle the ghosts in sight, and make bank doing so. With a third game on the horizon, it is time to revisit the original game on the Nintendo 3DS. The game still plays incredibly well, though it adds some wrinkles that you need to put into perspective. 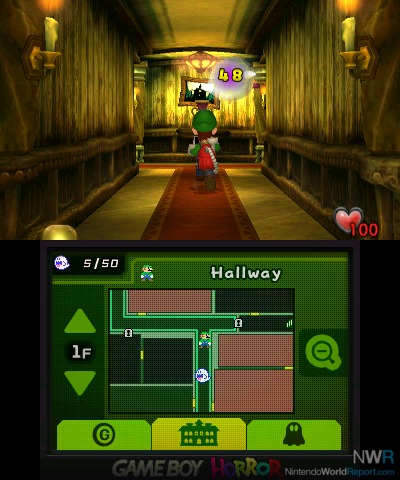 For those who’ve never played Luigi's Mansion before, let me make this introduction brief. Luigi mysteriously seems to have won a mansion. I say mysteriously because he never entered a contest nor had he heard anything about the location. Luigi arrives but Mario, who is invited by his brother, is nowhere in sight. The green lad has to find out what happened to Mario and help his new friend Professor E. Gadd. The professor is studying the ghosts of the mansion and kindly asks Luigi to capture them. He reluctantly agrees. With the Poltergust 300 at the ready, Luigi dives into the unknown and tries to find out what the various chambers have in store for him. Along the way, he encounters various bosses called Portrait Ghosts and uncovers the identity of the true culprit behind the whole scheme.

The gameplay feels like I remember it. You flash a light in the faces of the ghosts and start sucking them up with your vacuum. While doing so, the ghosts drag you across the room, and it takes a sharp eye to avoid the curves thrown at you. The trick is to eliminate each ghost in a single swoop. The task is easier said than done, but it feels so satisfying to pull it off. The HP of the ghosts will increase as you progress further, and getting the hang of the controls becomes key to survival. In addition to hit points, there will also be elemental powers and certain conditions that are required before activating the Poltergust. The game also asked you to move the Nintendo 3DS up and down to aim precisely with the gyroscope controls. The added control wrinkle takes a bit of getting used to, but it feels quite natural after a brief adjustment. Grezzo has done a grand job bringing over the control scheme that made Luigi's Mansion 2 outstanding.

With a connected world, it is important to know where you are heading. The original game made major usage of something called the Game Boy Horror. It is here that you could also communicate with the professor and find what you had collected so far. While the Game Boy Horror is still present, all of its functionality has been moved to the bottom screen of the 3DS. The map screen can be zoomed in and out further than before with the option to scroll with the stylus or your finger. Your money and ghosts can looked at by pressing the dedicated buttons on the touchscreen. Everything feels within reach, and it doesn't really interrupt your gameplay like it might have in the GameCube version. Even the conversations with the professor are spread out across two screens to much better effect. 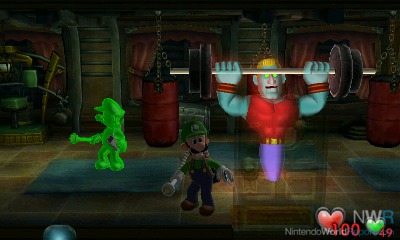 In addition to the standard single-player campaign, Luigi's Mansion on Nintendo 3DS can also be played over local co-op. To explore the mansion together, you will both need a copy of the game. That being said, there are a bunch of asterisks attached to this. The second player will become a slime green Luigi that will aid the first player. Slime Luigi has only 50 health points (compared to Luigi’s normal 100), and some things can't be done by this second player. To give an example, the second player can't open any doors. In fact, it isn't even possible for him to pick up any keys found in treasure chests.

Your friend is purely there to offer help in ghost hunting. While that could be a thing in itself, it made the experience in general kind of easy. To be fair, there are potential scenarios where this is a good thing, but personally I can't see myself playing the game this way. Ghosts with 100HP were sucked up in mere seconds when playing in co-op mode, which lessened the threat of these enemies. The survival aspect of the game felt lost in the shuffle as coordination and quick takedowns changed the way Luigi's Mansion is played. This is great for a parent and child, but not so much for two people who know the game quite well.

As far as visuals are concerned, Luigi's Mansion looks brilliant when played alone. All the details are exactly like I remember them from the GameCube era. The pure variety found within the rooms and their ghosts is really staggering. In terms of frame rate and performance, Luigi's Mansion doesn't struggle to keep up either, which shows how well made the port truly is. That being said, the title does take a bit of a hit in the local co-op mode. It doesn't play terribly, but there is noticeable slowdown that hurts the experience. The co-op mode never ever felt really smooth, which is somewhat concerning.

Luigi's Mansion on Nintendo 3DS is interesting. Personally I can't wait to play this all the way through, but I think I’ll go in it alone. It is here that the game runs like it should, which is rather important for my enjoyment. The co-op is something I couldn't care less about, especially considering the performance has been somewhat underwhelming. The gameplay quirks leave a lot to be desired when playing together. Regardless, the struggle to stay alive is still very much present solo, and I can't wait to dig into the Boss Rush and other features this October.

One thing I'm curious about is, how exactly do the controls work? The original game made use of both sticks, so does this game require a New 3DS model? I can't see the nub working very well for the wrangling aspect. 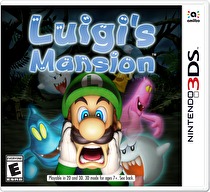