A new journey awaits us, but where are we exactly heading?

These are weird times. We have on our hands a new Layton game that isn't exactly new and comes to a Nintendo system second. Because yes, Layton's Mystery Journey released this past July on mobile platforms to moderate praise. While I don't exactly have much to add on that specific front, I've spent some time with the Nintendo 3DS version. The entry, which is a gigantic departure for the series, goes for a completely new tone that mostly pays off, but not entirely.

Instead of the beloved Professor Layton, you'll be playing as his daughter Katrielle. The game opens as she starts her detective agency and her career as a mystery solver. You will soon run into the assistant Ernest Greeves and sarcastic talking canine Sherl.They are an enjoyable set of characters that really play off each other well. Sadly, outside of key moments and animated scenes, you will have to read what they have to say. This is a bit underwhelming, given the series's history with voice acting.

The same can be said about the story. The previous Layton games all had a clear premise. Layton would encounter a grave mystery, find out matters in pieces and slowly work towards a grander goal. In Layton's Mystery Journey, however, an over-arching plot is really hard to find. It isn't until way later that it becomes something deep. Until that point, the plot is driven by cases, of which I've played three. Rest assured that the supporting characters are entertaining. The game becomes a little too talky at moments, but never goes in the realm of being annoying.

As far as gameplay is concerned, it feels a lot like the original trilogies. In each of the cases, you will travel to the various locales and interact with your magnifying glass on the touchscreen. You will search for clues, examine certain objects and hop into conversations with the characters on screen. It is the most effective way to find out what you need to know and get closer to a solution. All of the information is tracked in your bag, so you can remind yourself as needed. Once you receive a certain number of important clues, Katrielle will put everything together for a grand finale.

The other side here are the puzzles, which have been a staple since day one and in my opinion are as strong as ever. The brain teasing conundrums test your logic in various ways and remain entertaining throughout. That being said, they do start off easier than in previous Layton entries, where some of the answers are quite obvious to a trained eye. It's mostly the puzzles that required you to fill in a number that skewed simpler. The others grow more difficult as you progress, so there is still a solid difficulty curve.

While I did play some of the mobile version, I didn't really get on with it. When I play the puzzles, I like to write down memos and have the real estate free of my big fingers. This is why playing it on the 3DS suits me a whole lot more. I can put the stylus in my hand and interact with the touchscreen, while I look at the information on the top. For what it's worth, the mobile version tried to recreate this faithfully, but it falls short in how I approach the Layton games.

As far as the presentation of Layton's Mystery Journey is concerned, it is as colorful as I remember the previous games being. The 2D environmental work remains impressive and fun to explore. That being said, there are less engaging elements than in the previous games, which is a slight bummer. The last couple of entry added layer upon layer of scenery, ensuring that there was plenty to uncover. The feeling you are left with here is one-dimensional. That feeling is enhanced by the game only running in 2D. The game runs well on the system, and the music is just as fantastic as ever with the opening tune really setting the tone for a lighter journey.

Layton's Mystery Journey seems like a serviceable follow-up to the original series. The new tone delights me, even if the story leaves things to be desired. The case structure makes the game less impactful and that is the real big bummer here. Next to that, it is a bit too talky and story beats take too long to get things underway. Overall though, its highs still outlive its lows and Level-5 have a great starting point for a new series. Mystery Journey is slightly more underwhelming than I would have hoped, but Level-5 shows that they can still pull it off. 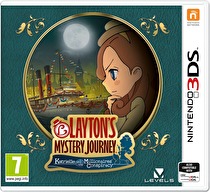