We take a deep look into the combat system in Capcom’s latest Monster Hunter title. 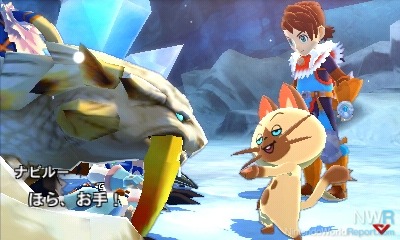 It’s important to note that when coming in to Monster Hunter Stories, you should not take the in-game systems lightly. Despite being a game aimed toward a younger and less hardcore audience, Capcom’s latest foray into this transmedia property offers a more complex experience than would be expected. After spending around ten hours with the final retail build of the game, I can honestly say that this unique take on the world of Monster Hunter is not only fun and interesting, but also intricate in more ways than I thought possible.

First and foremost, you are able to have up to five monsters, or monsties (Otomon in Japanese), in your party at a time and are able to swap them in combat. You are also able to use special abilities of the monsties throughout the overworld. With that said, having a balanced team of monsties with different abilities can be extremely helpful when exploring. For example, having a monster with jump will give you the ability to jump from specific “jump points” throughout the world that can either get you to areas that progress the story or get you to some rare items. Swimming works the same way - as long as there is a sloped access point to water, you are able to swim and locate things. There was even a monster that sent out what amounts to a radar-like signal that reveals all of the items nearby on the touch screen map. It’s really cool and makes you want to have a good variety of monsters on your team at all times. There are a total of 109 different monsties to find, and you have room for 200 of them in your monster stable. 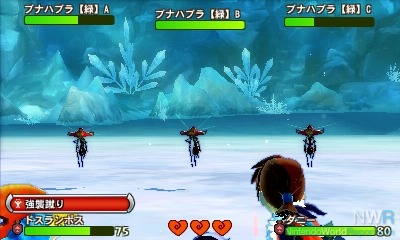 In case you missed my impressions from the past two Tokyo Game Shows (TGS 2015, TGS 2016), combat is intricate and yet easy enough to grasp. Rather than the active gameplay the Monster Hunter games are known for, Stories is a turn based RPG that has players going through menus laid out nicely on the touch screen. Your team consists of the player character and one monstie at a time as you face off against up to three other enemy monsters. Typical RPG-like actions are selectable on the touch screen such as standard attacks, items, skills, monstie swapping, running away, or monstie skills. Monstie attacks and skills are automatically chosen if you don’t do it yourself. Again, with Stories being turn based, you are free to go as slowly or quickly as you like.

As for standard attacks, Stories uses a rock-paper-scissors mechanic. After choosing the standard attack, you are given the choice to either use a speed, power, or technique based attack. If you win the engagement, you will take minimal damage and deal out more to your opponent and vice versa. It should be noted that while ever present, this element of combat only comes into play as long as the monster you are facing and your character or monstie are focused on each other. Basically, if the monster I’m fighting is focusing on my monstie and my in game avatar attacks it, the enemy will take damage but my avatar will be fine. If both you and your monstie choose the same kind of attack and win against an opposing monster, you’ll do a special combination attack that deals out a significant amount of damage. 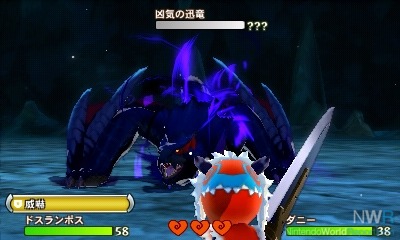 While the rock-paper-scissors element of combat plays a large role, there are times when you can use attacks or moves that don’t use power, speed or technique. This is mainly when using items or status effect skills. At the same time, attack based skills will have one of the attack types attached to them. Depending on your choice, you can take minimal damage from a pretty fierce attack or find yourself knocking on deaths door rather quickly. Speaking of death, Stories is pretty generous in that department. Players start out with three “Life Points” indicated by three hearts on the bottom of the upper screen. Any time that either your character or monstie loses all of their HP, you lose a life point. If you lose all three of them, you’ll exit the battle and be placed on the map a short distance from where you were. I’ve come close to losing all three life points in my time with that game but have never gotten completely wiped out.

Although players are able to ride their monsties freely in the overworld, the ability to ride your monstie in battle is based entirely on a gauge in the center of the touch screen called the “Kinship Gauge.” Filling up the gauge is a matter of working together with your monstie during the battle. For example, healing it or doing the combination attacks mentioned above will fill up the gauge. Once full, players can press the Y button to mount their monstie. From there, continuing to successfully pull off a power, speed or technique attack increases the kinship level on the gauge. The higher the kinship level (I believe it goes to level three or four), the more damage can be dealt with a special attack. Of course, as with the standard attacks, this has a high level of risk and reward. While you may get the chance to have a super powerful attack to pounce on the enemy, there is also the chance that the monster can knock you off of your mount, completely nullifying your chance of doing the special attack. This kind of decision making isn't something that comes into play while fighting lower level monsters, but rather boss monsters or more powerful on field foes. 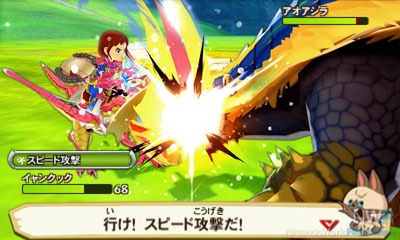 It’s fairly obvious that the combat here in Monster Hunter Stories is quite different from anything you’ve experienced in other mainline Monster Hunter games. At the same time, the level of complexity that is found in the mainline series still carries over into this new take on the world. It’s very fresh, and while complicated, not overly difficult to get the hang of after spending even just a little bit of time with it. 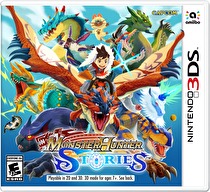