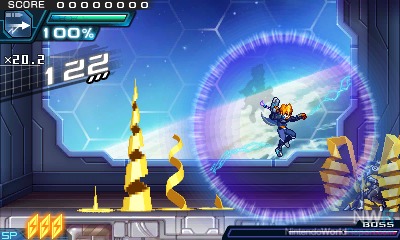 If you're a fan of The Famicast, the name Sairus Delaney is nothing new to you guys. For those that haven't heard of him, well, he's a member of The Famicast podcast, hailing from Ireland and currently living in Japan. For this special hands-on preview, Sairus, who accompanied me on the TGS show floor, prepared some super in depth impressions for Azure Striker Gunvolt 2. Everything written below is directly from him. Enjoy! - Danny

The original Azure Striker Gunvolt remains one of the standout titles in the 3DS eShop library, and there’s been quite a buzz about the sequel’s imminent release outside of Japan. Interestingly, last year I stumbled across Inti Creates’ small booth in the Indie Developers section of TGS where they were showing off the original Gunvolt to the masses. This year they’ve been given an upgrade as I found them with their own, albeit small booth on the main TGS show floor demoing the sequel.

The booth itself was nothing spectacular and obviously nothing on the level of the main triple A publishers. A handful of 3DS stations hooked up to large display monitors were bracketed by a few Gunvolt posters. A desk offered free fliers and document files featuring the main characters. The booth didn’t seem to be getting much traffic and one of the operators seemed very happy to see me walk in, and even happier to hear I’d played the original at length.

For those that haven’t played the original, it’s very reminiscent of Inti Creates’ older Megaman Zero titles. Mostly standard platforming is augmented with a wealth of ability customization and the usual “beat a stage, fight a boss, get a weapon” system of most Mega Man titles. Gunvolt’s main unique flair is that his standard pistol is near useless by itself. Instead you need to tag enemies with pistol shots, then use the R trigger to unleash devastating lightning blasts on them.

The sequel retains this basic game play for Gunvolt himself, but adds one major twist: you can now play as Copen, one of Gunvolt’s many rivals from the original. His game play is utterly different from the title character and a very welcome addition to the sequel. 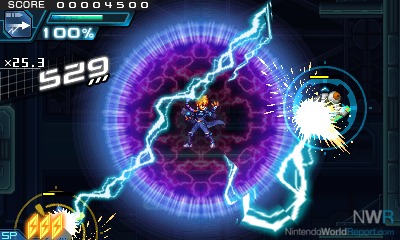 Immediately upon starting the demo I was given a choice between characters. Already being familiar with Gunvolt I picked Copen, but still expected him mostly to play the same as his counterpart. On paper they actually sound sort of similar. Copen still uses a tag and lock on system like Gunvolt, but his main gimmick is a jet pack. To tag enemies you need to press the L button to rocket dash into them. You’ll tag and bounce off of them and then you can mash Y to fire missiles. You can tag multiple enemies at the same time to quickly fill the screen with missiles.

This all seemed pretty standard fare until the booth operator told me to try dashing while holding up or down. This is where everything changes. Holding a direction will fire Copen off at a 45 degree angle up or down. He’ll keep going until you release the button, run out of fuel, tag an enemy or hit a wall. Hitting a wall, ceiling or floor will cause you to ricochet off it at a right angle. If you’ve ever played any of the Rocket Knight series you’ll know how this works.

In Gunvolt 2, it’s nothing short of magical. If you go in a straight line with the rocket pack you eventually run out of fuel and stop moving, but every time you hit a wall it resets one section of your fuel gauge. The game is crafted so there are walls, ceilings and corners everywhere, so you’re zipping around like a maniac constantly. At any time you can release the boost to hover in place, allowing you to reorient for another jump. Destroying enemies both boosts your score and gives you extra fuel. With carefully aimed rocket jumps you’ll be careening off walls and enemies, taking breathers just long enough to pause and change direction. If you do happen to run out of fuel it’ll slowly charge back by itself, or you can tap Down twice to get it back quickly while Copen stands defenselessly in place. In the demo I played, Copen had three bars on his fuel gauge with each one being a rocket dash in one direction, which gave me a massive amount of movement options. Copen also has access to several other attack options, namely a secondary attack on R which set off a large explosion over a tagged enemy and a super attack that wipes the entire screen on X. 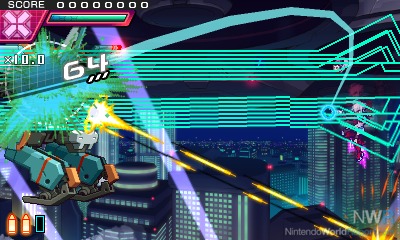 Having so many controls to keep track of was my one complaint with what I played, and has echoes of a problem I had with the original game. The game is extremely fast if you’re trying for a good score and simply put, there are a lot of controls in play at all times. I found myself hitting the wrong buttons more frequently than I’d like, either dropping my momentum or using special attacks when I was trying to save them. This is a problem that will no doubt disappear with longer play and muscle memory, but as I mentioned, this same point of complex controls was a definite issue I had with the original Gunvolt, particularly on the teeny classic 3DS I own.

However, despite those complaints, I had an absolute blast with the short demo I played of Gunvolt 2. Originally I had been planning on skipping the sequel as my interest in the original petered out by the time I reached the end, but the rocketeering was a fantastic breath of fresh air, and has me excited for the international September 29 release!

Sairus Delaney? Never heard of him. Good write-up though! 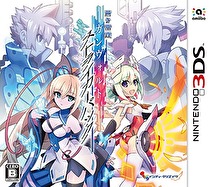