If you like the social elements of Tomodachi Life, then we have some good news for you!

When Nintendo announced that they were going to make mobile games, I couldn't find the energy to care all that much. As someone who already plays a lot of mobile and handheld games, I wasn't sure what Nintendo would bring to the mobile market. Miitomo ended up being a pleasant surprise. Nintendo has dabbled with more personal interaction in the form of StreetPass and Tomodachi Life, so seeing them taking a mobile spin on it is interesting. Before playing it though, I was skeptical about its ability to be entertaining. ''Answering a bunch of questions and sending those answers to friends? How is that fun,'' I thought to myself. Luckily, I got the chance to check out the new application for an extended period of time at Nintendo Benelux. The results were more intriguing than I hoped it would be.

After choosing your language and accepting the terms of service, you are prompted to set up a Mii character. The Mii editor has been reorganized to fit the mobile screen and it does the job fairly well. You pick your gender, face, hair, eyebrows, eyes, nose, mouth and extras from the blue buttons in the middle of the screen. Beneath there, you will be able to scroll through all of your options and above you can see your progress very clearly. You can even turn your Mii around to see all of its features. It is a thing that you are used to after doing it so many times, but there are two more ways to set up a Mii. First, you are able to use QR codes from the Wii U and Nintendo 3DS and skip the creation process entirely. Then there is the photo feature, which will track your face more accurately with a smartphone camera. It will automatically track your face and shoot pictures on the fly, so that you can freely choose what compliments your facial features.

You are, however, not quite done with setting yourself up. In a Tomodachi Life-like fashion, you give yourself a voice and personality. In fact, it seems exactly the same as that game, but just set up in a nicer fashion. The terms of personalities have been radically changed as the descriptions are deeper and try to provoke more a reflection of yourself. This is important, because Miitomo lives or dies by your personal input alone. Your Mii is even straight up with you and asks you to be as honest as possible. Based on your answers, you get a Mii apartment assigned that you can't change or will barely leave. 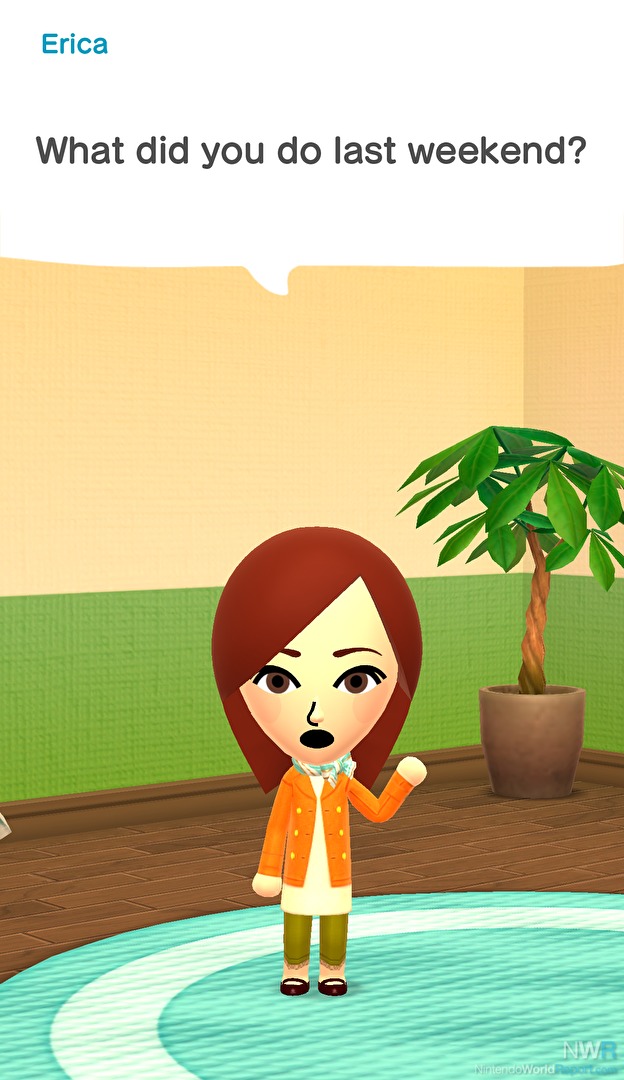 Talking about your Mii, it is time to set foot into the game proper. The main focus of Miitomo is answering questions. These can range from ''What is your favorite food?'' to ''Which earth shattering event happened in your life?'' While this seems trivial, the power comes from typing in those answers yourself. It creates something that is uniquely yours and your Mii says it back in a charming way. Say words like Nintendo, money, dog or love and animations will pop up to really seal the deal. Once you are satisfied, you will send it off for all yours friends to see. They can give it a heart, comment on it and maybe start a conversation on the matter in real life. That is what I was noticing the most in my testing group. We all started talking about our interests, even though we barely knew one another.

What Nintendo has created is a social platform. Not in the ways of Facebook or Twitter, but it compliments both your digital and physical life. You can only give short answers or reactions, which are just slightly longer than a Tweet. The length is long enough to start questioning why others gave a certain answer. It makes an impact as a conversation starter and within the right group of people, this could become a thing of beauty. Nintendo gives people full control in their communications and nothing about it is curated. You can go as wild as you like within the boundaries that your friends find acceptable. That alone is quite daring in itself, as family and friends need to have their own form of self control.

That aspect is not only shown in answering the more basic questions, but also when you go and visit their Mii apartment rooms. You will start a conversation with your friend's Mii, who will cycle through the recent answers that he or she has given. This happens a few times before the game promptly asks you to give the Mii some candy. This would allow you to hear another slew of questions, though your Mii already cycles through all of your friends in your room, so it doesn't matter all that much. When you decide to stop though, your friend's Mii ask a more personal question like ''What celeb does he or she look like?'' After the answer, your Mii will pay a visit to your friend and interact with them. It are the little touches like that make it interesting. 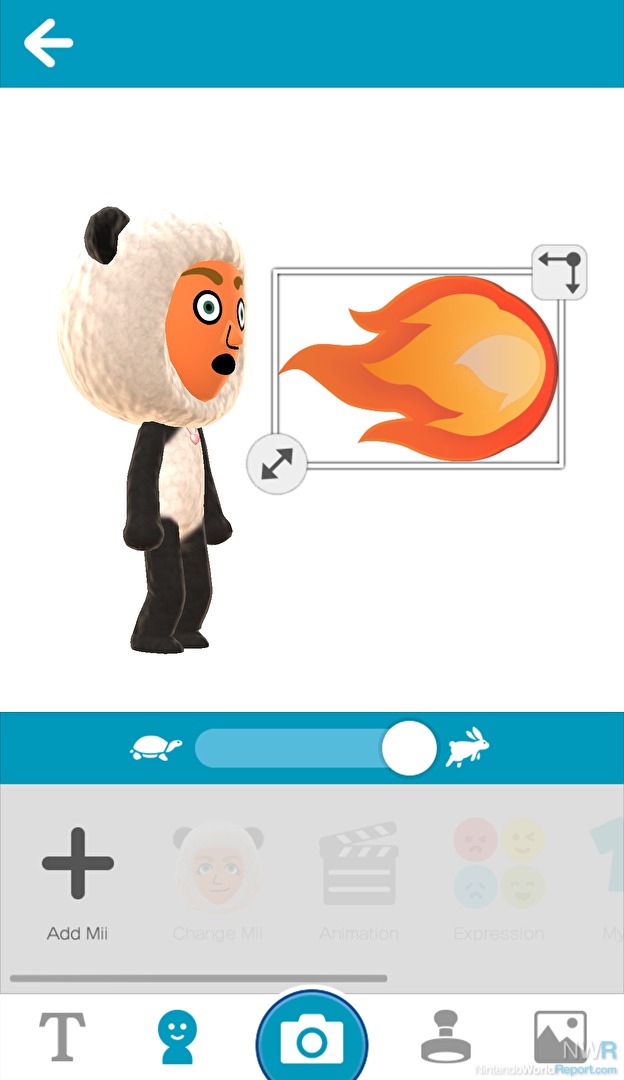 Keep in mind that you don't have to answer a question you don't care about. You can skip it altogether and avoid discussing things that hit too close to home. There is no penalty in doing so and you can always return to it if you change your mind. That is what makes Miitomo continuously fun as it doesn't try to annoy you and keeps your wishes front and center. It is enjoyable to go to My Answers and Recent and check out how others reacted on your posts, which constantly made me want to come back for more. The ways the Miis react with their different personalities and voices is just so incredibly charming.

To add extra charm to your posts, you have the option to make something fun in Miifotos. This is something I toyed around with a lot during my test session, because it is all just so silly and stupid. It allows you to create vignettes with up to five Miis, including yourself and people that are in your friends list. For that, you will have quite a number of tools at your disposal. There are a variety of backgrounds, stamps, poses, faces and text options to make something glorious. You are free to zoom in on elements within the scene, move them around and make everything fit within the landscape. Making a single photo took me a good ten minutes, because I wanted nail everything to a point. Miifotos can be put in reactions, sent to other social media or simply be saved to your device. Sadly, you can't make GIFs out of them, which is something I would have loved. The Miis move like crazy between shots, so something animated would have been really neat.

Participating in all of these activities nets you coins, which can be spent on various elements within the game. While these can be purchased with real life funds, I found that I was getting them at a rapid pace, so I never looked into how much the microtransactions would cost. Coins allow you to purchase new clothing items in the game's store and there seems to be a wide variety at hand to keep you engaged. While some change on a daily basis, others will stay for longer which is something to keep in mind. Right at the start of the session I was already rewarded with a Mario hat, so I can imagine that other famous Nintendo properties will make an appearance. The cost of clothing items depends on the item itself, so I can't speak for the things that will be there on launch day. There is a Miitomo Drop minigame promised, in which certain limited time costumes can be won by spending coins or using special game cards. You likely get these from interacting with other people's Miis, but I am not 100% sure about that. 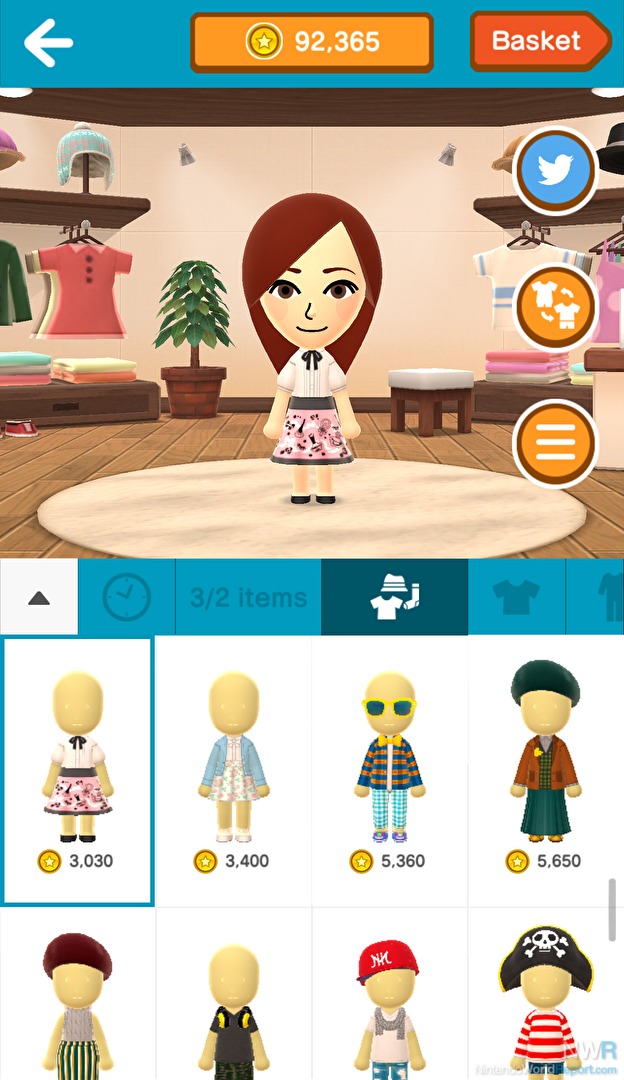 Another point of emphasis in Miitomo is the interaction with other social media. This already becomes apparent when you add friends via Twitter or Facebook (real-life is also possible), but it goes quite a bit deeper than that. You can share answers on Twitter, if you found them either funny or interesting, so that you encourage other people to try the app that way. the other thing social media adds is outfits. If you browse on your social media of choice and see a showcase of an outfit that you dig, you can click a link that you will bring you to a page in the store that allows you to purchase it yourself. These are clever extras to ensure that the application stays in people's minds.

Finally, let us discuss the additional options that unlock with a My Nintendo account. When you hook up your account to Miitomo, a slew of missions open up for you. Similarly to games likeRace the Sun or Jetpack Joyride, there are bars indicating your progress, so you easily know what still needs to be done. You will tasked to receive five hearts, give three answers within a day or to dress up a certain amount of times. By completing these tasks, the player will be rewarded with My Nintendo Platinum coins, which can be put back into digital content. For Miitomo, this means netting extra costumes that you won't get anywhere else!

Miitomo is shaping up to be quite an intriguing application. With fun new ways to interact with others, it honestly has a lot of potential. Typing personalized answers and seeing how others react is endlessly charming and it was way better than I thought it would be. While getting certain costumes and items might make use of the microtransactions, I have not seen anything that can't be achieved with a little bit of effort. The true test of Miitomo is finding a large audience that will find it worth returning to all the time. For me, it constantly started conversations and I really hope that Nintendo has enough questions to keep the demand high. They did promise us that more questions will be added in time, but this will likely depend on the world's initial reaction. My reaction is, at the very least, quite optimistic.