The sequel to the game that I secretly liked a ton more than I should have.

Somewhere in the middle of 2013, I started playing different video games purely to see what they were like. One of those games was New Style Boutique, better known as Style Savvy: Trendsetters in North America. It was enjoyable and a place where being creative was a must. Selecting outfits for costumers was the game's bread and butter, and I really enjoyed that aspect about it. I never played that game to completion, but it was a game that I wanted to come back to at some point. This is where New Style Boutique 2 comes into the picture to prove that adding to the formula is always welcome!

The first game made you an employee and you grew as you went through different roles across the game. Another point of interest is that the game took a realistic approach, which was more reflective of the trials and tribulations of a fashion boutique employee. New Style Boutique 2 starts things off very different. You are thrown into a magical world called Beaumonde City. Contributor to Nintendo Force Magazine Rebecca Rudeen, coined the phrase ''Fashion Narnia'' to me and I think that is the best way of describing it. The city is obsessed with fashion and every little thing that surrounds it. I mean, the city seems quite a regular one when you go to locations, but once you start talking, it is clear what they find important.

As you get a good understanding what the world is like, the first job is running the boutique again. You will have to sell clothes, give fashion advice and listen to what these NPCs have to say. The first 80 minutes of doing this felt somewhat slow and this had only one real reason: The challenge wasn't there. You had to pick one piece of clothing for your costumers and they would walk away satisfied. I understand that this is a game targeted for a different audience first, but the first game did progress a bit faster than this. The whole situation was somewhat annoying and I was just silently awaiting what was next.

Another irritation that popped up quickly is that NPCs tend to repeat the same lines over and over. This was offensive to the point that two costumers in a row came with the exact same request. It felt really lazy, despite the dialogue being very well written. It would be nice if the game kept this all in check, but no such luck I'm afraid. The good part, even when it didn't go my way, were the controls. It felt fantastic to select stuff with the stylus and go through all the options at hand. You can use the buttons if you so desire, but the tactile feel really brings the idea of managing stock home. With very advanced searching tools, finding what you needed was a breeze and very nice to use.

Eventually the game opened up and this was because a fashion show was about to happen in Beaumonde City. You have to make entire outfits to showcase and prep yourself for the big day. Along the way, you have to ensure that costumers trusted you enough to give it a watch. To make this happen, you have to use the ''Try It On'' button while recommending clothing. It becomes a risk if they will end up liking it, but when successful the costumer will end up way more satisfied with their purchase. Once the stadium is filled, you give a show like no other and use prompts to impress the public at large.

The end result is that more people come and check out your store, which opens up a ton more features. First things first, there will be a lot more full costumes needed from there on out. This makes traveling to the Exhibition Hall very important. Here you will be able to find various brands, which all go for various styles. April Bonbon gives a lot of lively clothes, while Marzipan Sky is more traditionally girly. But how do you know what you need the most? Choosing from 19.000 items can indeed be daunting, so you can change the store to pull it more in your favor. By applying various interiors and exteriors, you will attract different audiences every time you play. You can also suit up a mannequin, which costumers will approach to simply get the same exact same outfit. There is a lot of management involved once you get going!

Next to the happenings at the store, there is more to do in New Style Boutique 2. You can become a Hair Stylist and give citizens a brand new haircut. You will have to pay attention to length, fringes, highlights and a lot more. It can be a little tricky to know what exactly what will satisfy them, but the easy selection menus are once again a big help. Even more challenging is being a Makeup Artist. You are constantly given reference photos and have to apply everything the right way. Personally I never got it right on the first try and feel that I am always missing something crucial on the photo. If it is close enough though, the costumer is usually okay with it, but she will pay you less for it.

After your initial success in the first fashion show, you will be able to do more of them and really show what you are capable of. You will become a real model, who even gets to do some photo shoots once in a while. You can stand in various poses and work with brands to satisfy their needs. You will have to picky with your own clothing, make-up and your hair, which makes it more tricky than it actually sounds. On the other side of spectrum, you can also become a Designer and make your own creations for the brands in the game. You will start of with T-Shirts and learn the ropes of making something unique. Once you get going, you can also make your own brand of clothes and become the true star in the fashion realm. You can even create your own custom emblems to give it a nice personal touch!

If you want a break from all of this stuff, you can relax and go to the Caprice Chalet. Here it is possible to decorate various rooms in an Animal Crossing-esque way. You get a lot of miniatures throughout the game, which doesn’t seem like much at first glance. If you go to a special dollhouse and make those rooms, they will magically appear in the world. The miniatures allow you to make shops and living rooms, which characters in the game can visit. The living rooms are very lucrative as NPCs will come to you and ask if they can rent them. They will give you a hefty amount of money for it, which really makes it worthwhile to sit down and actually create them. Miniatures can also be bought at a special store, so there is a lot of things possible in this small little mode. These rooms can be shared over the internet and each of them has an unique address, which makes it easy to find those of friends. Your Caprice Chalet data can also be exchanged through StreetPass, if you so desire.

Graphically, New Style Boutique 2 looks absolutely stunning. It features sharp visuals, which really fit the Nintendo 3DS well. The environments and characters are bright and colorful, which will certainly get you in the mood for this game. The 3D effects add to that intrigue and bring a layer of depth that pleases the eyes. The music deserves even more props, because it features a wide range of music that always seems to click. The various stores in the Exhibition Hall each have their own piece of music and there is a lot to choose from when you set up the store. They clearly put a lot of time and care into it.

At the end of the day, New Style Boutique 2 - Fashion Forward is a fun game to dive into. It doesn't talk down to its target audience, though those opening moments are a bit on the slower side. Once you get a feel to it, the whole ride becomes addicting and you want to help one more client before hitting the sack. The presentation and controls make it extra enticing and there is a lot of love put in to make it all click. It remains to be seen if New Style Boutique 2 can keep me engaged until the end, but it is trying and that deserves some encouragement at the very least. Let us only hope that the dialogue doesn't repeat itself even more!

I hope NA gets it. Enough people have spoken highly of the series that it would be a shame if it didn't release as wide as possible.

I kinda really like the art department in these games. So much I I want to buy them just so I can analyze it better.

I hope NA gets it. Enough people have spoken highly of the series that it would be a shame if it didn't release as wide as possible.

Yep! This, Picross 3D 2, and Rhythm Heaven are three that I hope Nintendo localizes over for North America (and for the latter two, PAL territories as well). 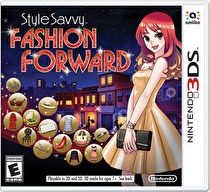