Exploring the world of this brand new take on the franchise.

The steps that the Animal Crossing team are currently taking is a bit scary. Later this year, we will be getting a brand new party game, which will be set in the world of those cuddly animals. That isn't, however, the only game coming that is related to the franchise. The title in question here is Animal Crossing: Happy Home Designer, which I have been playing for a good number of days now. It is a grand departure from everything that the series stands for, but it handles it with quite a lot of grace. It makes strides in making quick play sessions inviting and gives a different kind of freedom to the player.

The first steps in the game are pretty straightforward, but changes are everywhere you look. You will start with making your own character and there are a solid amount of options available to you. You can choose the face, eye color and even give your avatar the haircut that you find fitting. There are no complicated guides that you have to go through and it is all there for you to choose. It makes me sigh from relief as it was infuriating to get your villager just right. Later on in the game, you can give the character various glasses, pants, shoes and other stuff to wear!

After that warm bath, you are introduced to Tom Nook and his posse of Happy Home employees. There is Lyle the Otter and Digby the Dog, who you might have seen in the previous Animal Crossing: New Leaf. They are mostly here to give you advice and help to keep the game moving forward. The most interaction will be done with Lottie the Otter, who is Lyle's niece and handles the front desk in the game. She welcomes you every time you boot up the game and tells you what to do next. Lottie is a warm character and adorable in her own right. While it is sort of a shame that you don't talk with the others more, you sort of realise that this game is simply not about them. I mean, Tom Nook barely shows up to see what you are actually doing on your working day!

Lottie introduces you to the main focus of the game fairly quickly, which is customizing the homes of the animals you meet. It is certainly a weird step to take with this new game. The player never had a real job in the Animal Crossing universe and ultimately could do whatever he/she wanted. This makes the game feel restrictive in the beginning as you are doing nothing more than placing furniture in a house. The game starts to evolve fairly quickly after that, as it starts to introduce new mechanics and this makes every round you play unique.

It starts with placing the house on a place of your choosing, which you can do on the map screen. By tapping the location multiple times, you cycle through various seasons and give the location a different look. Once you are satisfied, you will find yourself on an empty piece of land with nothing more than a house. This house can modified with different roofs, doors, colors and a palette of other features. It can be as grand or little as your own heart desires. Filling up the land will prove a bit more tricky, as you will not have much outside some trees and flowers at first. You see, every animal unlocks new furniture for you to use and completing a lot of requests is vital to have a lot on offer. I like this approach a ton, as it forces me to play the game and try to explore more every time.

This new furniture is also usually the stuff that the character prefers to have in his/her house. He/she will react to everything that you place and remove, so it gives you a good idea of the animal's taste. You are free to use whatever you like, but you are restricted in one single way. Three pieces of furniture will be in- or outside of the house and these need to implemented into the final design. If you don't, the animal in question will simply not approve. Even with this in place, the fail state of the game is pretty low. You can do very little to screw it up and even at that, the animal will be fine with that you give them anyway.

This forces you to keep some quality control in place yourself and create designs that are uniquely yours. While I can't imagine this being a focus when you start out, it will be once you reach that animal threshold. You are somewhat on a leash still, but you can freely make something that will prove interesting. As the designer, you can add many touches next to the furniture. You will add wallpaper, carpets, lamps, signs, music covers, paintings and so much more in these homes. By completing special courses in the office, which you pay for with Play Coins, you can even expand the feature set. You can set background sounds, choose curtains, change up furniture, display fossils and get a bigger variety of fish and paintings. The more you play, the more you will earn!

Next to the homes of the animals, you will also get Public Works tasks from Isabelle, who will hire you from time to time. In the opening moments, you will have to build a school. As you begin, you will have to choose the outside look from a selection of options. Once you go inside, you are given all the tools you need to make the perfect school. From benches to lockers, everything is at hand to make it as polished as possible. There are some guidelines that you will have to deal with though, like an amount of tables or a certain object that absolutely belongs. Luckily, you are always given more than one option, so it never becomes stale. Somewhat later, you will be asked back as you deal with a hospital, cafe and even a little shop! The hospital is the most curious one as you have to deal with multiple rooms for the very first time. Bigger and better challenges will await you the more you play through the game, but the correct tools are there to guide the way.

One thing that I absolutely must mention, is how great the controls are in Happy Home Designer. With the stylus at the ready, you will drag and drop items into the playing field. You can tap the object to change the perspective and carry them all easily to somewhere on the grid. You can even drag the characters and get an idea how it is seeing them in the scene. By tapping on the D-Pad, you can change the camera angle and get 360 degrees view of the room's process. Outside of that, it is pretty much just like Animal Crossing: New Leaf. You will move around with the Circle Pad and simply interact with others by pressing the A-button. This becomes needed as you enter the plaza, where old and new animals are gathered. A speech bubble above their head will give you their requests and what you can expect. If you feel like it, you simply start the conversation and do your smooth talking!

The different types of animals also come into play with the scenes that you have created. Once you wrapped up the development of a property, a little scene will play where the animals interact with the scene. After that, you can see things still happening upon your return. The creatures will say specific things once they are in the store and school or comment on things that are placed around the house. You can throw in your own favorite characters by purchasing amiibo cards. By scanning them in, they will enter the house or scene and talk in their own quirky fashion.

These same cards are how you get requests from characters before even meeting them ever in the game. You scan one in, accept to do the work after a bit of banter and unlock them in the game that way. There will be characters that are exclusive to the cards and with 400 to collect, it is safe to say that a lot of content is still tucked away in the game. That being said, we don’t need fifty Tom Nook varations and that seems to be what has happened. I will limit myself to a few packages, even if collecting more Animal Crossing merchandise is very tempting. What is interesting here is that you can put data back on the card and give that information to the friend. They will get more new furniture that way and they barely had to work for it!

The presentation of Animal Crossing: Happy Home Designer is as good as Animal Crossing: New Leaf. In fact, it does look a lot like that previous entry. There is wrong nothing with that, as it is a game that always looked striking. With colorful environments and a sharp look, there will be enough to scream overjoyed over. In particular in 3D as the elements really pop on the upper screen. The soundtrack has a new selection of music, which is entirely new to the game. They are on the same quality as the previous entries, though the scope of it all is a bit lessened. That won't stop the tunes from being catchy, as the completion scene has the greatest music for that moment. It doesn't get better than that!

At the end of the day, Animal Crossing: Happy Home Designer is a very different beast from anything in the franchise. It honestly does some surprising things with the formula, even if it feels quite restrictive at moments. What makes the game shine are the mechanics and the cute banter occurs between the various characters. It remains the question if a western audience will adore this new approach, and the game will really have to resonate in a completely new way than before. I am confident that this is possible, though the 400 amiibo card future is a scary one.


Even though this spin-off looks like it recycles a bit much, it's good to hear that it is an interesting and entertaining experience. Not sure if I want to jump in it, though. Hmm, I might since I've enjoyed watching House Hunters International quite a bit.

"Where the homes are predetermined and everybody just follows a script!" 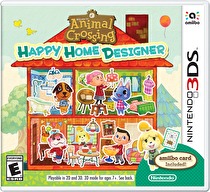