Level-5’s Guild series has already seen six releases in Japan, with a seventh coming shortly. Keiji Inafune, best known for his work on the Mega Man and Dead Rising games, is taking a shot at the collaborative series with his latest creation, Mushikera Sensha (which appears to be trademarked as Bugs vs. Tanks in the West), or Insect Tank, which comes as part of Guild02 in Japan.

The premise of Insect Tank revolves around a World War II German tank regiment that disappeared... or did they? In this world, the regiment was somehow shrunk down to insect-like size and now have to brave dangers such as killer raindrops, food shortages, and an onslaught of ants, bees, moths, and more. The levels are varied, and in the three hours I spent with the game, locales included a forest floor, treetops, and a marsh. Everything, from enemies to tanks to environments, is rendered in 3D and look gritty and convincing. Even for an 800-yen downloadable title, this might not be the best-looking game on the system, but its unique look and feel give it a lot of character. 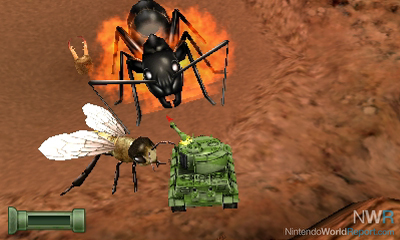 Controls in Insect Tank are a little complicated but simple enough to grasp once you spend some time with the game. You can move your tank with either the Circle pad or D-pad. Movement of the turret is mapped to the Y, X and A buttons, with Y and A moving it left or right and X centering the turret directly in front of your tank. A radar on the touch screen shows nearby enemies and the layout of the land. You can also use the touch screen to move the turret. By pressing L, players can zoom out from the map to see more of the terrain. Firing the turret is handled automatically when enemies are nearby. At first, I wasn’t fond of this idea. However, the AI is typically pretty intelligent and fires when it needs to. The rate of fire isn’t as rapid as you might find in an arcade-like shooter, but shoots in timed increments, as a real tank would probably operate. Though they might sound a bit unorthodox, the controls feel really good.

The game offers several modes, but mainly focuses on Mission Mode, which offers a total of 40 missions, tons of options for customization, and around 30 different tanks to unlock. Before going into a mission, you can mix and match different parts of tanks, such as the turret and the hull. Each part has different statistics based on things such as speed, firepower, defense, and so on. The missions themselves vary quite a bit. Some have you navigating through insect-filled areas toward a set location to rescue a teammate, while others give you some kind of goal, such as collecting pieces of a cookie to help your team survive. Some of my favorite missions have you protecting your base from an onslaught of insects, which is both challenging and a lot of fun. In addition to the missions is Collection, which lets you see insects you came across on the maps and tanks you have collected. There is also StreetPass support and a two- to four-player cooperative local multiplayer mode (which I was unable to try) where you and your friends can team up against the seemingly uncountable army of arthropods. 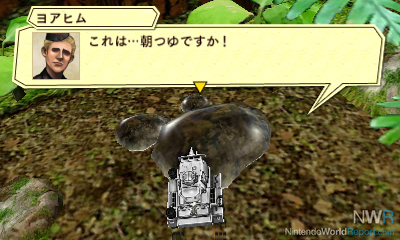 At this point, I’m about halfway through Insect Tank and am really enjoying its quirkiness and challenge of its levels. Inafune and his team have crafted an interesting concept and gameplay mechanics that are a ton of fun to play. The game is not officially announced for the West, but is rumored to be on the way. If and when it does hit your region, you should definitely check it out.