Flying radio wave humans live inside of your Nintendo 3DS.

Denpa Ningen no RPG hits digital shelves in Japan on February 8, but thanks to a recently released demo (the first demo of an eShop game), Japanese 3DS owners have a chance to try the game out before its release. This zany title was developed by Genius Sonority Inc. who has made several titles with Nintendo since its inception in 2002 , including Pokémon Colosseum, Pokémon Battle Revolution, and Battle & Get: Pokémon Typing DS. This marks the first title the company is publishing and the first original IP they have created. 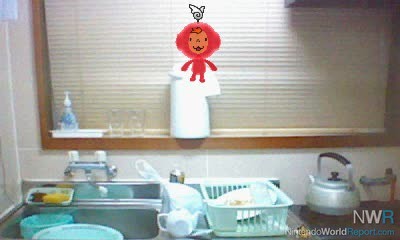 You can find these crazy guys anywhere

After listening to the explanation of what is going on from Alan, you go on your first mission to catch some Denpa Ningen, as they are flying around the sky. Utilizing the 3DS camera, you search for Denpa Ningen. Once in your sights, you can shoot a net at an unsuspecting creature and capture it. After catching one, you are able to see a number of different statistics, such as the character’s HP, magic points, etc. The segment is identical to Face Raiders in the sense that you need to move around to be able to shoot the wily characters. Fortunately, I played the game in my apartment, away from people staring and potentially questioning my sanity on public transportation. It is definitely a strange way to start off a game, but considering the overall peculiar vibe found throughout, it is fitting. 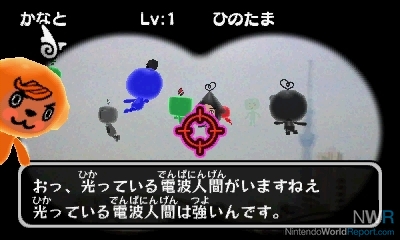 After going through the capture section, you then get into the RPG section of the game. From there, you control Alan and three of the Denpa Ningen you captured previously and make your way to a cave. Controls are pretty simple: you move around your party with the Circle Pad, and Y brings up the menu. Players can use either the touch screen or the physical buttons to navigate the menus. With menus being on the small side, I found it much easier to use the buttons.

Combat is pretty typical of what you would find in a traditional turn-based RPG, except with a slight wrinkle to that formula. By pressing the Y button at the start of your action selection, you can have the computer auto battle one round of attacks for you. It isn’t just limited to doing attacks, as healing and other magic-based moves are made as well. By pressing X at the start of the turn, the computer can also make automatic decisions for you but this time without using any of your AP (Antenna Points), which serve as the basis for your magic based attacks. For those who want more control, you can choose attacks or use items manually. I found using the automatic assist option almost seemed unfair at times. For example, it would sometimes seem to make the decision to heal one of my characters before I even knew they would take a critical hit in the battle. If I controlled the battle under the manual option, I would have had to pray that they could stay alive long enough for me to heal them. This bug can potentially give the player a huge advantage, and make the game easier than originally intended. This doesn’t ruin the experience, but it is definitely something RPG purists will want to stay away from. 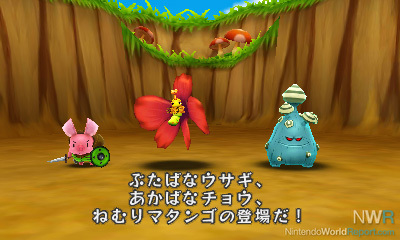 Pig-nosed bunny is in the house

The visuals in Denpa Ningen are very colorful and simple, and match perfectly with the aesthetic of the game—a simplified, easily accessible RPG. The Denpa Ningen themselves resemble Miis wearing full-body suits and have odd looking, individualized faces. Enemy designs are cleverly done and entertaining. Some of my favorites were the pig-nosed-bunny (it looks like a pig, but just has long ears) and the corn ghost (which was essentially an ear of corn with eyes). The boss in the demo, the Wolf-Bear, was aptly done, and is just as ridiculous as the other enemies. The attack animations for the members of your party are hilarious, as you see them gang up on the enemy and proceed to headbutt them to a pulp. The design choices and art direction meld together perfectly. 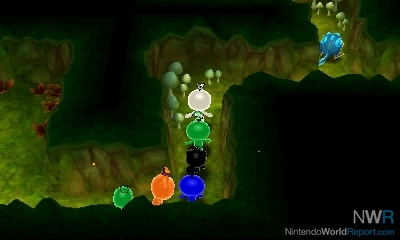 Genius Sonority Inc. has developed a number of games over the years, but Denpa Ningen no RPG marks their first title created without taking parts from an existing franchise. From my short time with the demo, it looks as though the company is going to deliver a polished, wacky package with a few flaws here and there. One thing they definitely did right with the demo is allowing you to take your saved progress and use it in the retail version of the game, should you buy it (the demo is the essentially beginning of the game). This is a great addition to the game and something that I hope continues in future eShop downloadable title demos. Denpa Ningen no RPG releases on February 8 in Japan and will retail for 800 yen, though gamers outside of Japan might have to wait a while before this game sees the light of day in their territory.

Thanks, Danny. Great preview. Look forward to hearing how you like the rest of the game when you inevitably, eventually purchase it. (Gotta keep up the "e-shp Bivens" moniker, eh)?

I gather from your closing sentences that the game is not yet scheduled for any release outside of Japan. Here's hoping. Looks really fun. I'd but it.

How much will it cost in Japan and how much does that translate to in bucks?
edit, never mind, 800 yen I see from the article. I still dunno how much this is in bucks but that's not your problem

I sure hope this comes to America. It looks like a bunch of fun. It's digital Nintendo, low risk to bring it state side!

800 yen is roughly $10 right now. Of course, that stuff is all relative to where you live. Since I earn in yen, it's not so bad. If I was earning in US $ and living here in Japan, it would be a different story!

I hope they bring this stateside. One of the 8-4 guys talked about it in their recent podcast and had similarly positive/weird things to say. I'm loving the wacky eShop Nintendo is giving us these days. Keep it up, sirs and madams!