If you need to train your eyes for parallax barrier 3D, this is the game for it.

Dream Trigger 3D is a bullet hell shooter that balances on the edge of overloading players by simultaneously using 3D, the touch screen, directional control, and triggers. It's unlike anything I've played before.

The top screen is the main play area. Though it's a bullet hell game, it does not scroll, and enemies can enter and exit from all sides. When enemies first travel on the screen, you can only see an energy signature. The bottom screen is made up of large "pixels" that represent sonar. Drawing on this screen sends out sonar pulses. When enemies travel through these pulses, they appear on the top screen. Only after the enemies are revealed, can they be attacked. Players must run into the enemies using the Circle or D-pad while firing with the trigger to take them down. You have a limited amount of attack power, which can be replenished through successful sonar hits. It can be challenging to coordinate everything, especially in later levels.

The enemies come in different patterns, and their moves must be anticipated on the touchscreen to have any chance at defeating them. As in other bullet hell-type games, the hit box is pretty small as to make the game possible, though still very challenging. Bonuses and power-ups float on the screen, and make use of the 3D feature. When the items are in the same plane as the player, they can be collected.

The game features a wide variety of stages where both the player and enemies are made up of abstract shapes, some mimicking flowers or digital signals, for instance. The music is highly dynamic, changing depending what is happening on the screen. There are also Mini-bosses and boss stages, and players will have to figure our particular strategies in order to defeat them.

Trying to play the game with the 3D set to full at first is not recommended, as your eyes are likely to tire quickly -- mine did, and the game's producer's did initially. The trick is to train yourself to keep your arms still while playing as to not fall out of the stereoscopic sweet spot, no small feat when you're trying to manage multiple screens and control schemes all at once.

Dream Trigger 3D is full sensory overload, and an interesting take on the bullet hell sub-genre. There's really no other game like it. Producer Joe Fletcher noted that development on Dream Trigger 3D has actually been completed, but Nintendo wanted to space out releases for the 3DS launch. D3 is waiting to hear back regarding a concrete launch date, though it should be appearing sometime during the launch window.

Looks pretty psychedelic. In any event, I'm not much of a fan of bullet hell shooters, but if Dream Trigger uses the 3D constructively in a gameplay sense, I'd be willing to give this a shot.

That trailer really doesn't help with understanding the gameplay.

Yeah, it's kind of complicated. The producer explained it, and it still didn't make sense until I played it. I still haven't decided if that's a good or bad thing. It's hardcore.

It's a bad thing if they want people to buy the game.

does the 3d just GO IN depth wise, or does it POP out at your face too?


I only heard about depth, not pop out. I can imagine this game being a pretty fun show piece if it popped out too. maybe since i haven't played the 3ds it's hard to understand. The ' depth' 3d has never really impressed me to much, but pop out is fun.

As I've said on here before, pop-out is basically impossible with this technology and screen size. You'd need a screen that covers your field of vision or laser projectors to be able to get good pop-out. 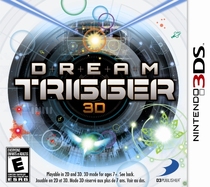