Combine Punch-Out!!, a little exploration, and dinosaurs and you get this kid-oriented 3DS game.

Combat of Giants: Dinosaurs 3D is a "launch window" 3DS game from Ubisoft Montreal, who have worked on numerous Combat of Giants games over the past few years. The series is aimed at kids, and because of that, the gameplay is somewhat lacking in depth. However, it's actually a cool little game with Punch-Out!!-inspired combat.

You take your pick from several different dinosaurs, and then explore simply-designed environments with them. Along the way, you collect items and equipment, uncovering numerous prehistoric facts. Every so often, you'll come across a rival dinosaur, which is when the combat begins. 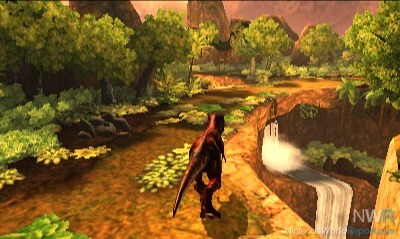 It's set up like a one-on-one fighter, with your dino on the left and the enemy dino on the right. Ideally, you have to be patient and wait for the cue to dodge, and then attack your foe. However, the combat was absurdly easy in this demo, and you could pretty much just spam attack to win. Hopefully, the game gets more challenging later on.

The combat has a few wrinkles. If you attack an enemy when he's flashing red or blue, you have the opportunity to do a special attack, which is either an attack flurry when he's red or a powerful Dino Strike when he's blue. The latter is visually impressive, especially in 3D. 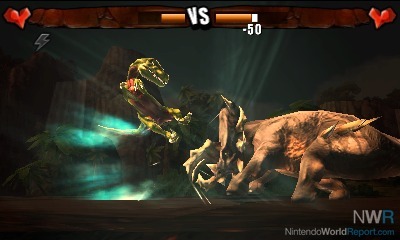 The environments feature particle effects that are made even better by the use of 3D. In general, the game runs well and looks good. I'm not quite sure if the gameplay will ever evolve past basic combat, but it seems to have the makings of a decent children's game.

Combat of Giants: Dinosaurs 3D is a launch title in Japan and Europe, and a launch window game in North America. 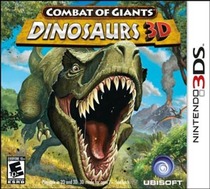