It's time to wind up the little guys again.

If people were upset over the story rehash in Super Mario Galaxy 2, they'll certainly have an issue with the latest Mario vs. Donkey Kong game. In the game, Mario has opened yet another theme park and gives away Mini Pauline toys to the first 100 visitors. Donkey Kong arrives as the 101st visitor, meaning he does not get the toy he desires. Enraged, he kidnaps Pauline while Mario falls on his ass trying to stop him. Again Mario teams up with the Mini-Marios to rescue Pauline and defeat Donkey Kong.

The latest entry follows closely in the footsteps of its predecessor -- players use the touch screen to direct Mini-Marios to the exit while avoiding traps and enemies. The game seems to have an emphases on mechanical structures such as girders that connect to screws that can be reconnected in different patterns, as well as springs, conveyor belts, pipes, and ladders.

A minigame based on the girders had items drop from the top into containers at the bottom. Players had to redirect the falling items into choice buckets by changing the platform configuration.

Levels can be designed through a touch interface and shared both locally and over Nintendo Wi-Fi Connection. Others can rate the levels. In addition, Nintendo will be running specific challenges inviting players to vote for the best entries.

Mario must be rolling to open two different theme parks...

Would you say the gameplay is closer to March of the Minis or Minis March Again (DSiWare)? 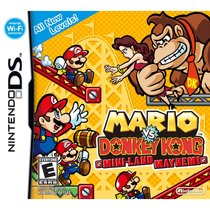