Hudson plays with shadows in this 3-D side-scrolling platformer for Wii.

Lost in Shadow is a retail side-scrolling platformer in which you play as a boy's shadow, which is torn asunder from its fleshy counterpart in the introductory sequence. The shadow ventures to be reunited with the boy, who is trapped on the rooftop of a tower. The result is platforming action reminiscent of NyxQuest or Lost Winds. 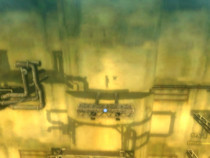 As a shadow, the player's character exists on an inherently 2D plane cast by the shadows of foreground platforms and objects in the "real" world. Using the Nunchuk's analog stick, the player moves the shadow in and out of the screen as it moves along the wall on which it exists — a clever visual trick. The shadow-boy must jump around (using the A button) and collect three Monitor Eyes in order to progress through and complete each level, and has a trusty sword (mapped to the B button) to thwart baddies in his way. The player can also level up his attack power by finding fragments of the boy's memories scattered about the stages.

Foreground objects and their shadowy projections affect the player's path; the player can manipulate specific objects using his "spangle" (Wii Remote pointer) and pushing B. For example, in the introductory level, rotating a platform in the foreground casts a taller shadow of a platform on which the player is standing, allowing him to access the area above. In another level, players can adjust the light source (which usually is below the camera), shifting where a foreground object's shadow is cast upon the wall to the player's advantage. I found the mapping of both the Spangle and sword actions to the same button to be a little disorienting, but serviceable, as the combat was subdued in the areas that were demoed.

The most interesting use of the shadow mechanic I saw was in a Shadow Corridor — a mini-game of sorts accessible by entering a portal in a level. In this room, there is a complex 3D platform structure, and the player must rotate the camera/light source left and right about an axis to progress on the 2D plane. Upon completing this puzzle room, the player is rewarded with an upgrade to his maximum health. The Hudson representative demoing the game explained that some of these rooms are optional, while others are required to progress. He also stated that there are other types of Shadow Corridors, although he did not elaborate.

Lost in Shadow has some interesting concepts and mostly responsive controls, but it's difficult to tell from the demo how well the final game will leverage its shadow mechanic. Roughly ten hours long (according to Hudson) and relatively plain in presentation, the quality of this single-player platformer will rest heavily on its level design. 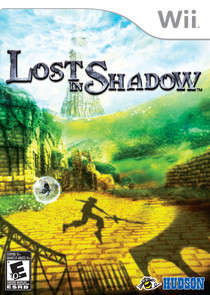