It's been a while since a Punch-Out!! game has debuted. But in its latest rendition, everything that made the series great is still intact and more polished than ever. The stereotyped characters are given more personality, while the gameplay is relatively unchanged. Even though it is technically a boxing game, Punch-Out!! has always been more about figuring out patterns in order to defeat opponents and this game is no different. I played through the Minor Circuit, which included three classic characters, Glass Joe, Von Kaiser, and King Hippo. It also included a new character, Disco Kid, who is a flamboyant, black, party-going fighter with a wide-open attack stance.

Punch-Out!! looks and feels great. Fighters are introduced through several colorful artistic drawings. The game itself is in cel-shaded 3D, and brings old characters to life. Characters also show injuries, and Little Mac can get pretty torn up. In standard Punch-Out!! form, fighters follow a particular pattern of attack in which it is easy to spot holes at the beginning, but timing becomes harder in later bouts. After figuring out the pattern, defeating your opponents is just a matter of timing and patience (and perhaps endurance with the new motion controls). If you remember how to beat King Hippo in the original game, you won't have too much trouble here since the same method is required. In between rounds, there is character dialog as in previous games, but this time the dialog is fully voiced. Doc Lewis is back as Little Mac's trainer. He not only offers advice between rounds, but he also lifts up Mac like a rag doll after the boxer has defeated his opponent. There are perhaps even more silly stereotypes throughout the game than were found in the old ones. For instance, when Glass Joe is knocked out, loaves of French bread fly out.

Control is an interesting fusion of classic Punch-Out!! control and motion control. As you might expect, punches are delivered by jabbing the Wii Remote for right hooks and the Nunchuk for left hooks. But rather than detecting direction or tilt, the analog stick and buttons are used. The B and Z buttons change the hooks to jabs, and the A and C buttons activate Star Punches (which are collected during well-timed attacks). Moving the Nunchuk's analog stick left or right makes Little Mac dodge in those directions. Pointing the stick down makes him duck, while pointing it up is used to jab or block opponent's punches. If knocked down, Mac can recover by rapidly shaking the Wii Remote and Nunchuk. Sometimes Mac can get a last ditch bit of energy even though it looks like he's done for. The combination control gives the cardio workout benefits of Wii Boxing, while allowing for the preciseness of traditional control. Punch-Out!! can also be controlled NES-style, though I did not get a chance to try this scheme.

This new Punch-Out!! feels very much like its old-school predecessors, yet brings a modern elegance. Players can experience the silliness of the classic franchise while burning off calories.

You were owned by King Hippo.... did they let anyone there try multiplayer?

The motion controls seem convoluted but actually playable. I wanna try out both motion and NES style. The question still remains is it worth $50 ? I am leaning toward no, and this would have been a great 2000 point download.

I think it was Jimmy Fallon playing the game while Aaron filmed over his shoulder.

Regardless of Jimmy Fallon's poor performance on late night tv, I am so damn psyched for this game.
Don't care about how many boxers will be in it. I just want some good old-fashioned Punch-Out!! fun. I believe in Next Level Games and their ability to make this great series stay great.

I seriously can't wait for this game.

Regardless of Jimmy Fallon's poor performance on late night tv, I am so damn psyched for this game.
Don't care about how many boxers will be in it. I just want some good old-fashioned Punch-Out!! fun. I believe in Next Level Games and their ability to make this great series stay great.

I am so far very impressed with what's known so far. I mean, I SMILED when I saw the artwork in between fights.

The characters were already iconic, but this seems to inject a lot of personality and heart to them. Can't wait to see how the rest of the characters are presented.

Looks great, though you guys are absolutely terrible! Where's the finesse?!

The controls sound a bit awkward, mostly because of the hook and star power buttons. It seems like you could get use to it though rather quickly. I'm especially fond of the ability to use your right and left arm to throw punches. Finally, my poor thumb will get some rest.

I was filming random people.  I played a lot better than that myself. ;-)

This game has some of the best animation I've ever seen. I can't wait to play it.

This game has some of the best animation I've ever seen. I can't wait to play it.

Definitely. People may complain about the somewhat limited roster but it seems they put a TON of work into animating and bringing each fighter to life. Not only that but it appears the game will have a "2nd quest" mode where fighting styles will change a bit from what I read. That combined with what appears to be a TON of unlockables via challenges along with a multiplayer mode make this a really complete package!

Next Level Games has always made well-animated characters. I may not care for the style of Mario Strikers Charged, but I can't deny the smoothness and attention to detail of the character animation. Seems like they are the right company to sign on for a Punch-Out!! game, which is notorious for having characters with lots of personality.

Megabite does the game support the balance board?

Supposedly, but I didn't get to try. 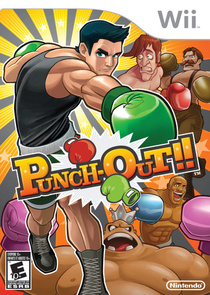