Will this one hit bull’s-eye?

What are the two most important aspects in a darts game for Wii? First of all, the motion controls have to successfully simulate the throwing motions of the player. Secondly, the physics engine has to be reliable, so that the player doesn’t feel cheated after making a shot. Fortunately, the developers seem to have focused greatly on these two aspects.

Performing a shot is easy enough for beginners, though difficult to master. You see a cursor, which you can position at the desired hitting spot on the board by pointing with the Wii Remote. You then hold the A Button to lock on and pull the Remote back to make your player on-screen do a corresponding movement with his arm. Thrusting the Remote forward as you release the A Button at just the right time sends your dart flying. The more accurate your movements are, the closer you dart will land to the desired spot. In Amateur Mode, the interface helps you deliver an accurate shot by means of a convenient power gauge, which is absent in the two more difficult modes.

The system feels intuitive, not least due to some accurate registrations of the motion controls. When the dart lands off target, you tend to know right away what you did wrong. You might have moved the Wii Remote either too much to the left or right when thrusting it forward. This mistake makes the dart veer off course. At other times, your thrusting motion might be too quick or too slow, making the dart land either above or below the desired hitting spot.

The physics capture the flight of the darts very well. You can even choose the weight of your darts, which have a significant influence on their trajectory in the air and how they collide with other darts. The sixteen licensed, professional players found in the game also behave realistically, and each one has distinct postures and throwing motions. In particular, their facial expressions impress – even those of players created by yourself in the Create a Character Mode.

The surroundings could use a little more work. Considering the fairly confined halls that the game takes place in, it’s a shame that the lighting effects look somewhat dull. Consisting of low-polygon models, the crowd also looks considerably less convincing than the real stars of the game. While these gripes are fairly minor, they do hurt the illusion of being at a world class darts tournament.

Otherwise, there is little to criticise. Whether the final copy will lack sufficient long-term appeal could be a valid concern, though, considering the fairly repetitive nature of the sport. Even though you continually improve your rank and gain access to different tournaments during your career, the gameplay itself seemingly revolves around little more than a series of throwing motions. On the other hand, the game comes with fourteen extensive multiplayer-centered party modes to break up the action. Offering classic variations such as 301, Round the Clock, Killer, and Cricket, these could enhance the longevity of the title significantly. 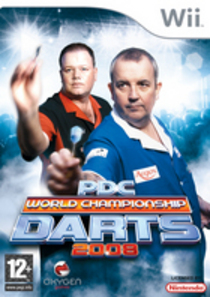