Paper Jam is a fun, enjoyable romp but the game's flaws hamper what could have been something great....

A very cute game, but pacing problems prevent the game from achieving excellence....

HANDS-ON: The brothers are ready for their second ride on the 3DS. They even brought a special guest along!...


Mario and Luigi: Paper Jam - A Meeting of Two Worlds

HANDS-ON: Just how well do the worlds of Paper Mario and Mario & Luigi mesh together?...

We can't say how many trees were killed in the making of this paper-tinged game, but here's what we think of it....

Can you feel the hype increasing?...

Neal and Donald look at the month ahead in Nintendo....

Getting a bit warmer....

Nintendo’s lineup alone is worth several hundred hours of time....

RADIO FREE NINTENDO: Episode 478: The Word You're Looking for Is Abomination

This is not especially observant; it's always a word worth finding....

Funk Taxonomy is more than just my music crew....

New Yoshi games don't always require his return, as far as he knows....

Honestly? We can probably just say this is all Francis the Chameleon’s fault.... 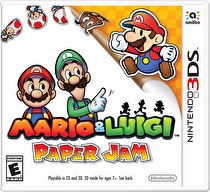