The Legend of Legacy

Can a no-nonsense gameplay-focused adventure work in a story-filled genre?...

Gaining Experience Without Points in The Legend of Legacy

HANDS-ON: The upcoming Atlus RPG has a unique progression structure that isn’t quite your normal RPG....


The Legend of Legacy Hands-On Preview

On the brink of major hype....

A couple of intriguing imports and the potential for a whole lot more...

One last look at the show floor and everything in between!...

It's fine to be enthusiastic about your work, but stop shooting the walls....

There is a new king at Royal Tennis Academy. Long live the King!...

The Super Mario Maker circle is complete and we reveal the winner of our Mario Maker-inspired RetroActive poll.... 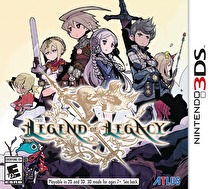