You get to fight dinosaurs in this game--this game wins....

The final day of our Amiibo giveaway contest has you captioning screenshots from eight games from E3! Update: Congratulations to the winner! And our random winner also selected!...

16-bit platformers, dungeon crawlers, and “Money Battle” RPGs are the focus of releases on Nintendo’s digital store this week....

The eShop is heating up for the holiday season....

My boy Hector once axed 40 guys in a single day; do you really think he's going to be shy about me touching his face?... 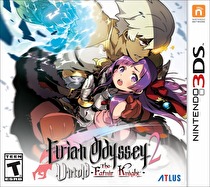