Dip your chip into this tasty treat....

Have you met Shovel Knight?...

When John isn't making video's he plays eShop games. Here are his favorites....

We sat down with DrinkBox Studios to discuss what this Director's Cut version of Guacamelee has on offer....

Our friend TYP drops in to helps us discuss lots of indie games, Pokemon, the D.I.C.E. awards, Virtual Handheld, and how to choose the right Smash Bros. character....

This week's episode is overloaded with brand new games and a brand New 3DS....

Our Game of the Week segment is back with Guacamelee and we preview Hyrule Warriors on this week's Connectivity. Plus we go over the results of last week's "Kongtest"....

While it still winks and nods at the past, DrinkBox’s debut Wii U title is an excellent example of how to make an original Metroid-like game.... 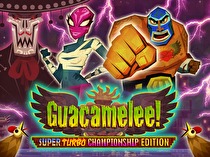