It's almost as great as finding your own Devil Fruit....

Mario, Ogre Battle, and even a new Picross e title appear this week on the eShop!... 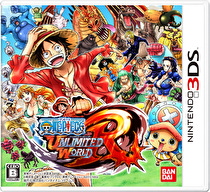