HANDS-ON: They need to add the letter S at the beginning....

It's like Earth Defense Force mixed with a really campy cartoon....

BLOG: A Tale of Tanks and Wii U DLC

With the first DLC hitting the Wii U eShop in Japan, I raise some questions....

Overwhelmed by all of the E3 news, games, and content? We got your back....

Placing Bets on the Wii U Launch Lineup 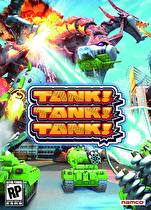