With a dab of Mario Kart and a dab of OutRun, Sumo Digital has created a fun racing game that will make Big the Cat say "Goodie."...

HANDS-ON: Could this Sega racer beat Mario Kart at its own game? These impressions come with 3 minutes of video footage from the Wii version....

We have additional details on this mascot racer from the showroom floor....

Gonna look around for more characters and tracks.As well as a price for the game.

Well there are some characters that would work well for a Wii game such as Jet Set Radio. There has been a few games for the Wii that this games characters come from such as House of the Dead Overkill.

I'm going to look around for some gameplay of the Wii version and price for the game.

Games I think they should make for Wii

and not in that order

Yes those titles should make it to the Wii. I haven't played any of them so i would like to try them out.
Ok the Original post should be up to date. If anybody finds some thing else just post it and I will add it.

Just to clarify, the 9 tracks you have listed aren't all the tracks, right?

Yeah that is correct vudu. Those are what I found on different sites. There is probably more.

Thank goodness.  The only reason I'm interested in this is because I've worn out the tracks in Mario Kart and I'm looking for more of the same.  I need more tracks!!

What sort of 4-player local will it have? Can I do co-op GP/missions?

Well as far as I know Kairon it will be splitscreen multiplayer. Probably racing against each other. I'll try and find more info on the matter.

The exclusive character for the Wii version should have been Mario.
No seriously, they've been in games together before, so why not?

So is anybody going to get this?

BTW, why are some of those characters hidden? The second one hidden was unveiled in a trailer, so not a secret.

So is anybody going to get this?

I kind of really want to, but I think it's going to come down to a game time decision.

If it weren't for the fact that Sega's difficult to get in touch with about review copies, I wish I could already have it so I could tell you guys if it's good or not.

BTW, why are some of those characters hidden? The second one hidden was unveiled in a trailer, so not a secret.

Neal Nintendo Power gave it a 8 for the Wii version and a 6 for the DS version.

Just some quick stuff until my review gets written, edited, and published:

24 total tracks, several, probably five or six four course grand-prix modes on beginner, at least.  64 single-player missions, which consist of driving to stuff in one lap around a track, or shooting specific targets, or just a two-lap race with a fixed character.  The definite "best" challenges have you steer or control a racer in their "All-Star" attack mode, which is about on par to Brawl's Smash Ball.

Past that, unlocking takes a "while," I suppose.  I racked up about three hours of actual play-time and still have five characters left, though I saved the quickest five for last.  Stages and musical tracks aren't yet available in the store, so I haven't unlocked any of those yet.  I believe only the first four stages begin unlocked, the other twenty, you likely have to buy.  There seems to be 40 possible tracks, if an "achievement" like meter is correct.

Beyond that, online mode is interesting.  Inside an individual race, I don't think it could be any better.  I haven't even noticed any "jumping" due to lag in position.  I've raced with probably four people though the number of people in the lobby before the race, and the actual number who participate often wasn't the same.  The only problem is that the rules the host suggests are final.  You can't choose to host the game, nor can you pick a specific game to join, so if you want to race without the AI players, or with them set to a specific difficulty, or even pick the track to race on, it's a real crapshoot, until you "receive" the ability to host.  From there, as long as you don't quit or disconnect, you retain control.  It's a bit weird, and annoying, really.

Beyond that, I'd have to say... hmm... I think what everyone knew:  Pick it up if you like Mario Kart and want more.

Oh, and the framerate chugs along at most points, it feels a little jumpy, but the game's speed is constant and faster than Mario Kart.  After some time, you don't notice it while you're playing.  I don't know how that holds over for the PS3 or 360 versions, but I've read they might be the same way.

Edit:  Whoops, you can press the "1" button in the shop to switch the category you're buying, making stages easier to buy than I stated =P

Wow 24 tracks, I'm getting this!  How is drifting with the wii wheel?

I didn't actually use the Wii Wheel so far, but to drift when you just use the Wii Remote, you just press down "1" and turn.  Drifting is more or less used like in Mario Kart, more for the boost, and less for turning, in my experience.  My preferred style is Wii Remote and Nunchuk, so I can fire weapons backwards.  I only glanced over the manual, but I didn't see or figure out anything about shooting items backwards with the Wii-remote alone, and when you're in first place, it's just a risk to attack in front of you.

Actually, one of the challenge missions asks you to drift and collect bananas as Ai-Ai, but truthfully, I couldn't hardly collect any bananas via any drifting method; I just had to slow down into the curving banana trails, so I could turn a bit more sharply.

Edit:  I double checked, and it turns out it's simply "Down" in Wii-Wheel mode to shoot.

I'm looking at the XBox 360 version myself but yeah I hope they patch it because it has problems with maintaining 60 frames/sec.

From what I can tell with the Wii version, at least, the framerate problems are very non-traditional.  It's not so much a matter where there's slowdown, but rather frame-skipping, I'd say.  The speed at which you perceive and control the game remains content, but it feels as though the game's visual moves in a staggered motion.

I say this, but truthfully, after three or four races, I lost most in-game perception of the frame problems, only noticing it in track overviews or Grand-Prix trophy awards.  It's an easy thing to overlook with just a little bit of time invested into the game.

Add to the discussion!
Wii 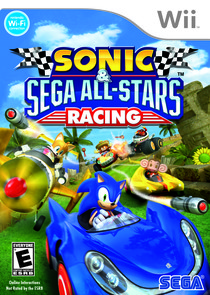