Relive the good, the bad, and the downright awful with this nostalgic collection....

HANDS-ON: Against all odds, GameCenter CX is coming to America. Get ready for "Video Game Training" on your DS....

XSEED's Director of Publishing chats with us about The Wizard of Oz, Sky Crawlers, Valhalla Knights, Ju-On, and yes, Retro Game Challenge....

RADIO FREE NINTENDO: Episode 531: Getting Down to Brass Max

Let me level with you, I need Jon to make sure that I don't make too many "Brass Balls" jokes in the episode titles. Yes, Jon is the guiding hand of maturity in terms of Brass Balls....

Bravely Default blows our minds, but not enough to further delay our Top 5 Games of 2013!...

Games, emails, and controversy -- what more could you want in a Nintendo podcast?... 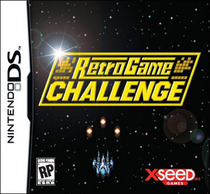