Jam with the Band

Play your part in a band with your friends! You can choose your instrument and play along with included songs, or you can simply compose your own to share with everyone else! The number of players is supposedly unrestricted.

Throw away that old ocarina and get yourself a must-have handheld music game!...

Today's entries are a little RPG heavy, but we still rock out with vampires to music....


Looking Back: First Memories of the DS: Danny's Memories

Danny's quest for the DS took him to the Land of the Rising Sun....


BLOG: Jam with the Professor: Part 1

Read as I try to convert Layton's theme into an unplayable mess of notes in Jam with the Band....

A small dose of Japan comes your way just in time for the (American) Thanksgiving weekend.... 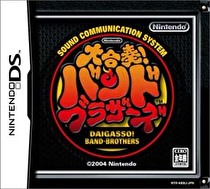