We talk with Team Breakfall about their upcoming port to Switch.

I recently had a chance to sit down with Mike Keogh, one of the co-founders of Team Breakfall, who are the developers behind the indie game Pizza Titan Ultra. Released back in April on Steam, Pizza Titan Ultra will be making its debut on Switch in the very near future and I was fortunate enough to be provided the opportunity to try it out prior to its release.

As will be discussed in the interview, a number of improvements have been added to the gameplay since its original Steam release, and the version I played ran well on Switch. I had enough time to complete three levels, delivering pizzas and destroying the evil robot army in the process. The movement felt quick and smooth with gameplay that left me feeling some Blast Corps robot destruction vibes. I’m looking forward to playing the final version in the not so distant future and got to learn a little bit of history about it’s development in the process.

What is Pizza Titan Ultra?

Pizza Titan Ultra is a game about delivering pizza in a 10 storey tall robot. It’s both a mech and a pizzeria. The pizzeria is in the chest of the mech, so you are running through a futuristic city crashing through things and dodging enemy robots to deliver hot and fresh pizza pies to your customers.

Pizza Titan Ultra has gameplay that we describe as weighty but agile, so you’re crashing through the city with this mech and we wanted it to be somewhat destructive. You do cause a lot of property damage that we leave up to the player, it's the player choice if they want to wreck the city or not. You feel like you have a move set, a lot of abilities that can get you through the city very fast, but it also has a slight aspect that until you get really good at it you feel a bit out of control. That’s something that we wanted to introduce to give it something interesting and fun to play and to give it a good difficulty curve for players as they do their deliveries. In addition to that we have an army of evil opposing pizzeria robots in the form of the Cheesebots. So Cheeseboard was an opposing pizzeria you put out of business... so he’s trying to destroy Ultra pizza and thwart their mission of pizza delivery. 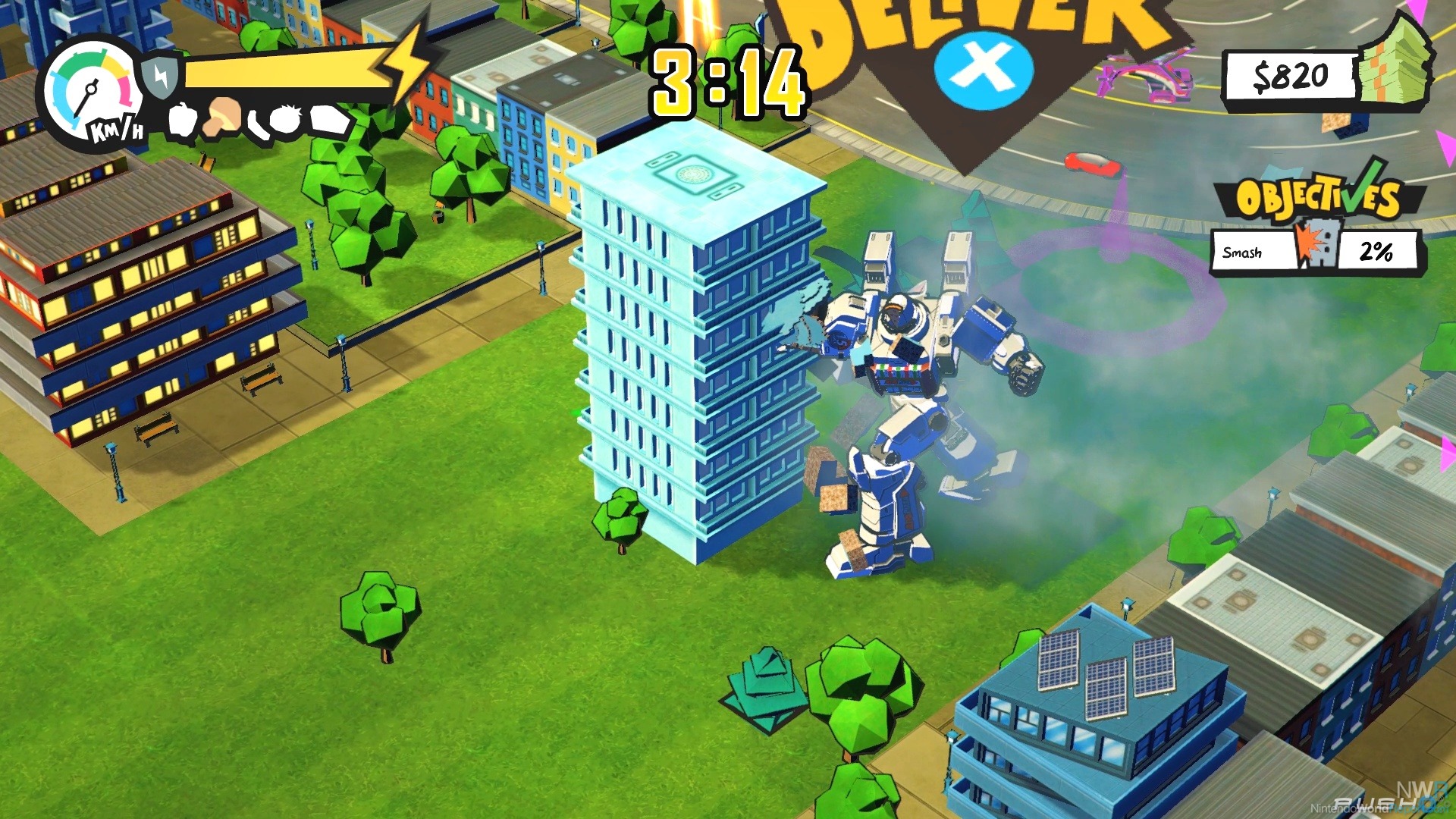 Where did you come up with the premise?

So, the game started its life as a fairly different experience. It was some of the same core mechanics but it was about satellite repairs in space and the mech, it was sort of a different thing. We just wanted to make something more understandable, something people would relate to, so that’s where pizza delivery came from. We were still looking at giant robots and jet packs and lasers and all that cool stuff. We knew we wanted to make something that had that awesome, robot intense combat. Eventually we just decided to merge those two ideas, so mechs and pizza came together, what exactly that would be we weren’t really sure when we first proposed it… but it made us laugh a lot. We just kinda rolled with that and eventually it landed at this hybrid action-platformer game that we have before us today.

We decided that it would be a love letter to the 90’s pop culture and the N64 and Dreamcast era. The idea of having a crew and their chatter is sort of Star Fox inspired, and then Blast Corps is something we looked at overtly because it has that same tone of destructive giant robots. Even the music, that era of Rare games was a favorite for me. We had a lot of influences and inspiration, Crazy Taxi is one a lot of people bring up, it’s this mundane thing made insane. The structure of where you deliver more pizzas to get more time on the clock, make more money, and keep that going as long as you can in an arcade open world. A lot of influences come from Saturday morning cartoons of that era, where we have all these characters that are wacky mashups of video games and cartoons.

How long have you been working on the project?

It’s been sort of a two year project, it’s gone a little bit over now on porting, but it’s mostly been that project for two years. Team Breakfall is currently a small core team of 4 people, other people sort of came and went but about 20 people have worked on the game. We had a lot of contract artists and additional programmers so we’ve had a lot of people come and go, a lot of part time people come in as needed so that we could make something a little bigger than we could make on our own.

Originally released on Steam, ported to Switch. Will there be many differences between the two versions?

Right now as it is, the steam version is sort of an earlier version. We made some improvements, so there’s game balance, general bug fixes, and stability changes. There’s been a massive improvement to the soundtrack, we added an hour and half of additional music so that now every mission now has a custom score. We’ve fined tuned and improved over the porting process but hopefully by the time its released publicly we’ll have it even further updated. We’ve kept improving the game and we will add those changes to Steam as well, so ultimately they will end up the same. 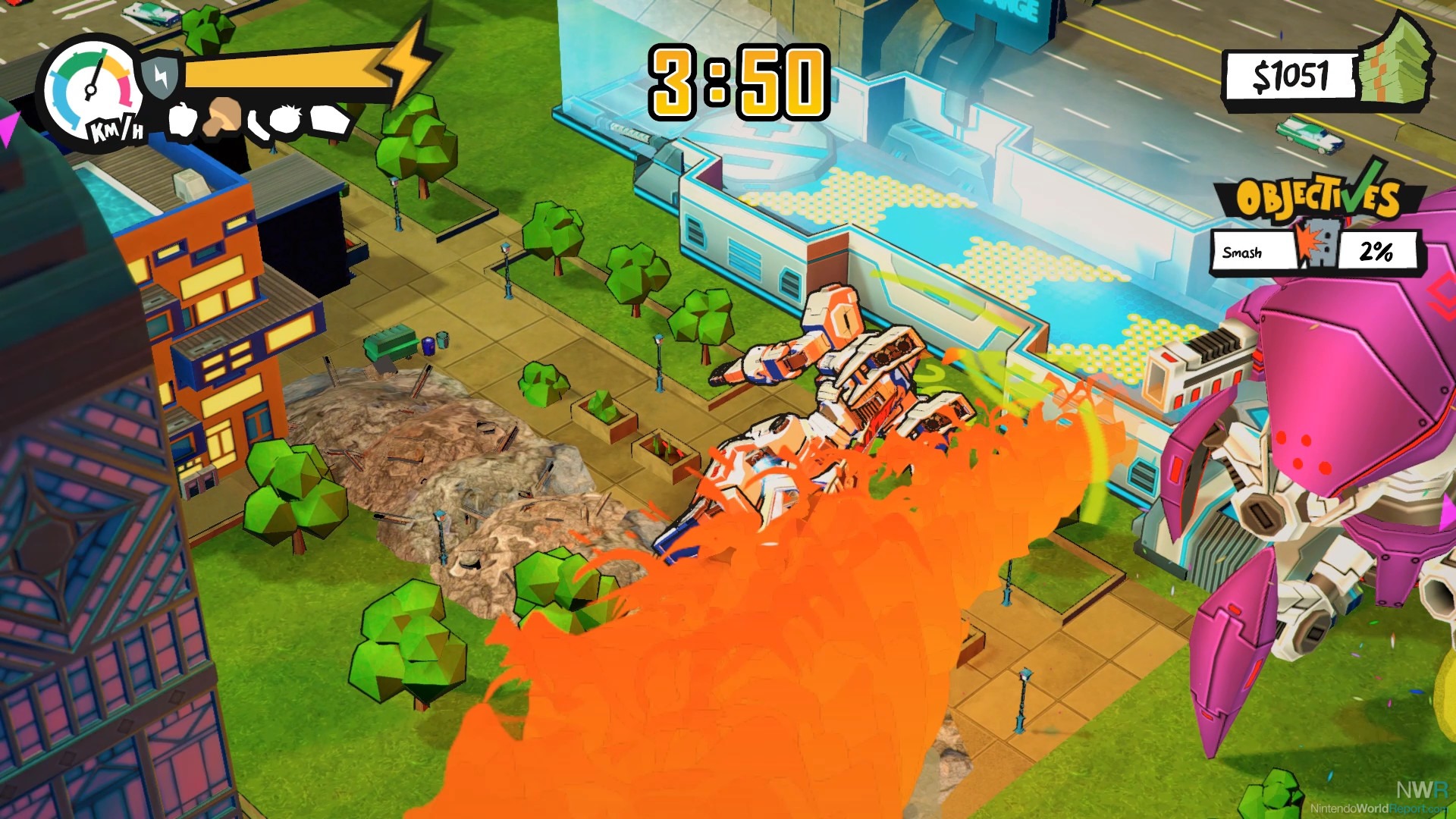 Where did you get the fantastic title song?

We’re very pleased with how that turned out. I wrote all the music, I actually sang that theme song. Fun story, I was almost kicked out of post-secondary education for not being able to sing. I have a background in music but in singing specifically, so that’s a lot of auto-tune equivalent software. I almost did it as a joke, I spent a lot of time just chipping away at trying to produce something like a classic late 80s early 90s Saturday morning cartoon theme song. Everyone thought it was hilarious, the vocals worked well enough so we just decided to keep it as is. When Jason our lead developer added the bouncing ball on the title screen it really came together. I think that’s part of the next-level hilarity. We like to think it’s catchy, it incorporates some of the other main themes of the music, and it's a sing along now, we had a lot of fun with that one.

Any new Switch projects on the horizon for Team Breakfall?

We like Switch, it’s a great platform. We’re always evaluating and looking at what we’ll do next and where the market trends are going. We do find that Switch looks like its a good place to be but with not having released yet we don’t know. We have some other prototypes on the back burner, some other ideas, maybe even old games that we are evaluating if they can be brought to the Switch. It’s something we hope to work on more as we progress into the future.

Can you tell me how Team Breakfall came together?

The 4 people all currently working at Breakfall are all co-founders and shareholders from when the company incorporated and that was back in 2013. We had been working together for many years before that. We started out as a hobby team working evenings and weekends working on a platformer called Marvin’s Mittens which is available on Steam. It’s a joyful, nostalgic kid playing in the snow game. It was just something we did as a passion project cause we wanted to make something really nice and fun and cute. So we made that game, then we did a few Game Jams where you make a game in 48 hours, which is where Starwahl came from. Starwahl actually took off, it was way more successful than we ever expected it to be and we had enough money from that we said “Hey, we can do this as a full-time job and maybe make some bigger games”. That brings us to where we are at today.