Xenoblade has the potential to be one of the greatest RPG titles to date. 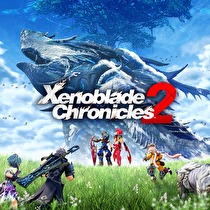 As a huge fan of RPGs, I still can’t explain how I have not played an entry in the Xenoblade series. Although I regret being in the dark this long, the benefit is that I am coming into Xenoblade Chronicles 2 on Switch with fresh eyes and an open heart. Having just finished watching (and rewatching many, many times) the Xenoblade Chronicles 2 Nintendo Direct, I can hardly contain my excitement for its December release. From what I’ve seen so far, Xenoblade 2 effectively takes all of the best features from the games I’ve grown to love and combines them into one beautiful mosaic of RPG bliss.

Let’s start off with the description of the relationship between Drivers and Blades. The Drivers are described as the warriors that do the fighting while the Blades provide them with abilities and powers to assist them to victory. This relationship seems very reminiscent of the connection between the Phantom Thieves and their Personas in Persona 5. Blades and Persona behave the same, providing unique abilities based on the different element of each blade. In Xenoblade, additional Blades are added to the party by finding core crystals, very similar to adding Personas to the party through masks. In battle, attacks between the different Drivers can be chained together to boost the impact, just like how the baton pass in Persona 5 increases the next attack. 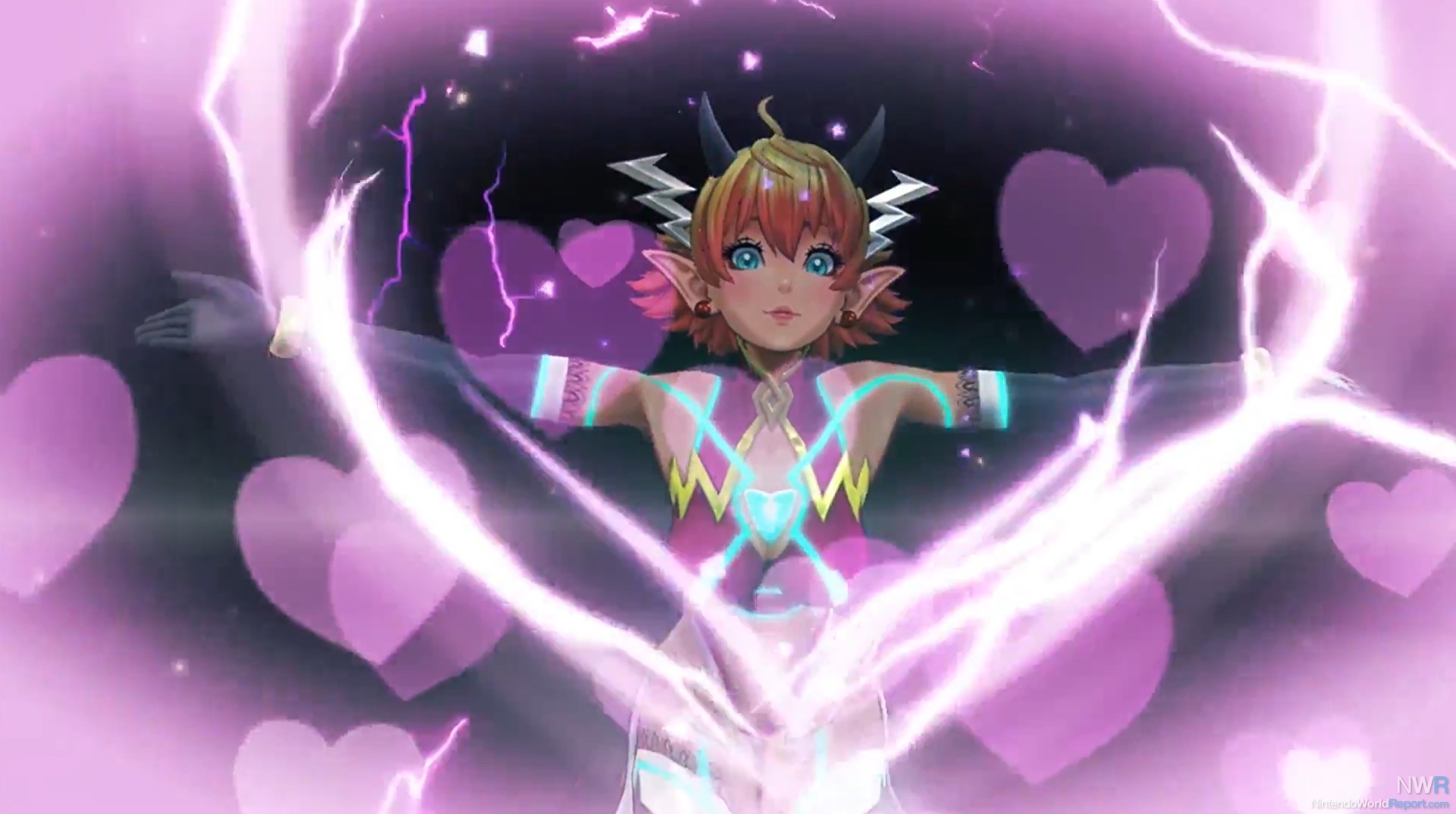 The similarities don’t end with Persona 5. The progression of both Drivers and Blades is done through an affinity chart, which brings back memories of many of the games within the Final Fantasy series specifically, the latest in the series Final Fantasy XV. The affinity chart in Xenoblade 2 unlocks new abilities and strengths over a range of different attributes just like the ascension chart in Final Fantasy XV. The ability to control the strengths and weaknesses growth of characters is one of my favorite aspects of RPGs, as it allows me to tailor the experience to my many changing moods. Maybe I’m enjoying battling my way through enemies and want to continue to focus on attack stats, or maybe it’s more fun to attack from afar so I build up my magic instead. By allowing this customization, it also increases the replayability. I tend to play RPGs several times because you can have a completely different experience through each play by focusing on different aspects of the progression tree. 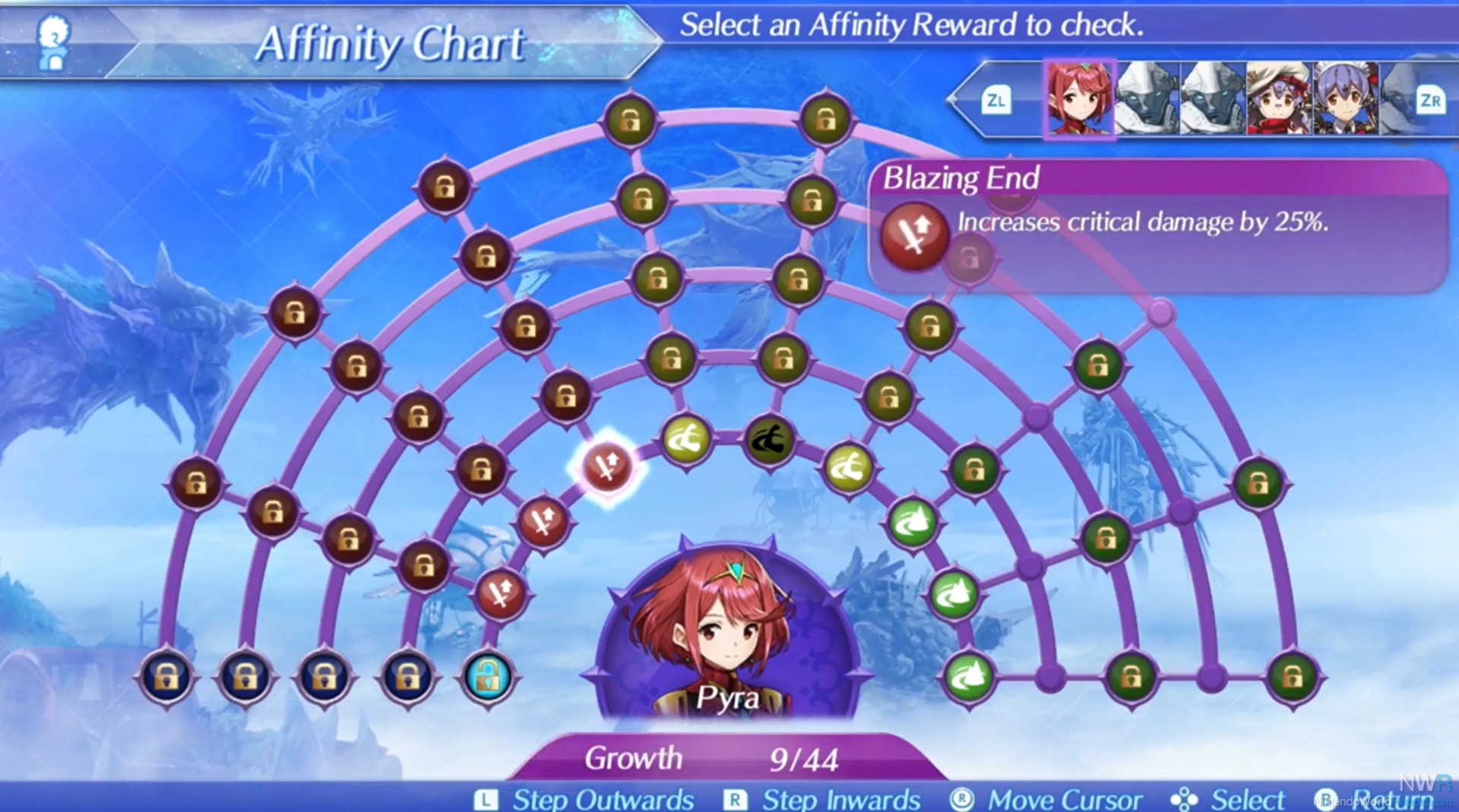 After picking my jaw up off the ground while the game’s expansive and lush environments were shown, the parallels between Xenoblade 2 and The Legend of Zelda: Breath of the Wild lay bare. The detail that went into the world of each Titan is incredible and watching Rex traverse the landscape brought back memories of exploring the world of Hyrule. It even seemed to me that the engine used in each game is at the very least similar if not the same. The best part of Breath of the Wild for me was the exploration, and the possibilities in Xenoblade seem even greater. Not only does it seem like the environment on a whole seems larger between the many Titans. but it also seems like the worlds themselves have more content. When you're not searching for core crystals to increase your number of Blades or completing salvages to find new items, you’re defending yourselves from raiders looking to steal the Aegis or dispatching local wildlife to boost your stats. 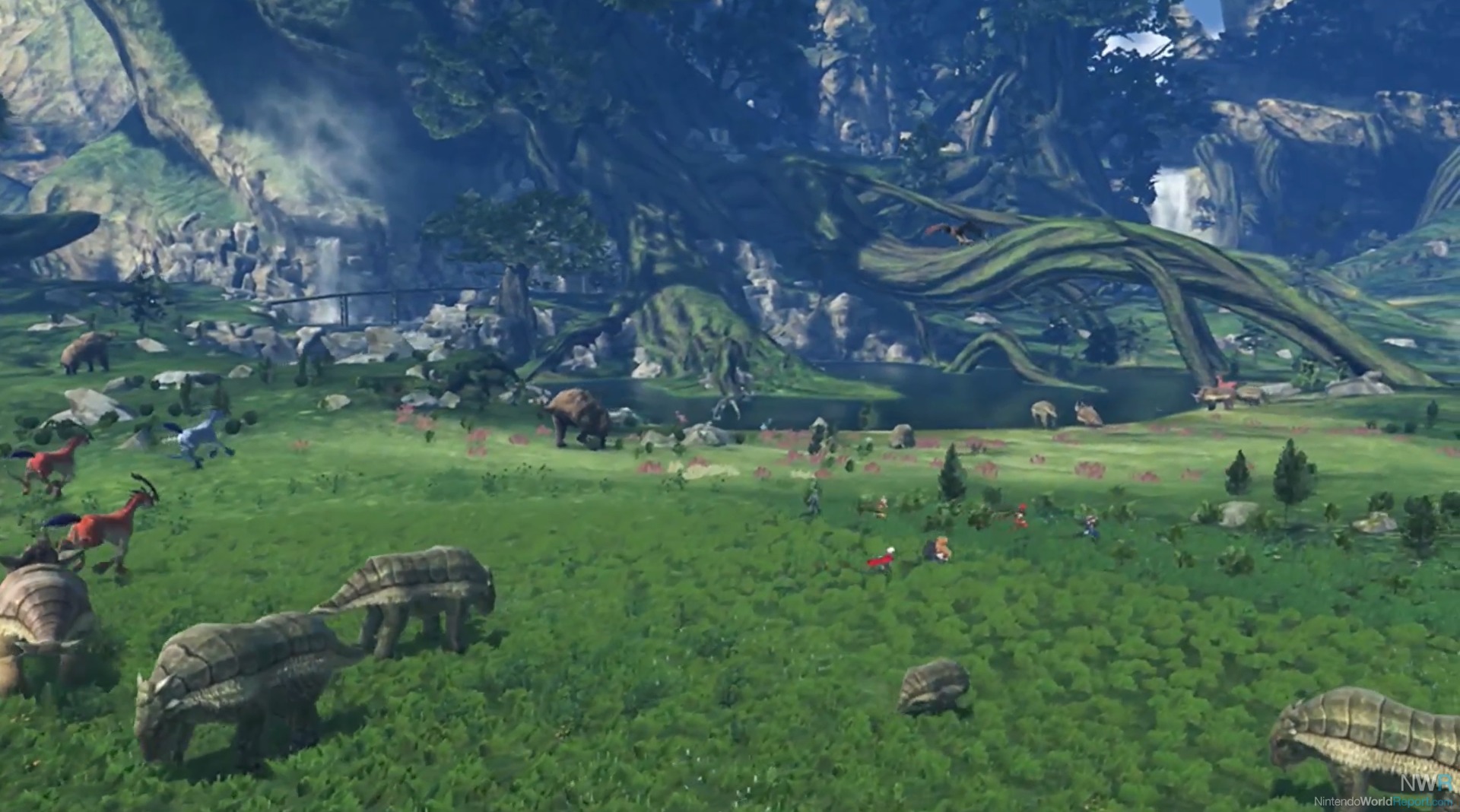 The final mechanic that I absolutely adore and is common among many of the great RPG titles is the rule of three. The rule of three must have come up over a half dozen times during the Direct. The Blades come in three different classes: Attackers, Tanks, and Healers. Each Driver can then equip any combination of three Blades and that will determine the class type of the Driver. The moves that can be used in battle by the Drivers is a choice of three from each of the three Blades, which means that on the battlefield, you’ll have access to nine different Driver Arts attacks at your disposal. Going even further, three different types of combos can be executed to increase your attacks damage. The Driver combo, for example, is utilized by chaining together Driver Arts attack in sequence. Blades also have the ability to combine specials together using the same element to boost subsequent attacks. The most powerful combination is actually a combination of the previous two; by combining both a Driver and Blade combo, you’ll activate the ever powerful Fusion combo and decimate your enemies with multiple special attacks. 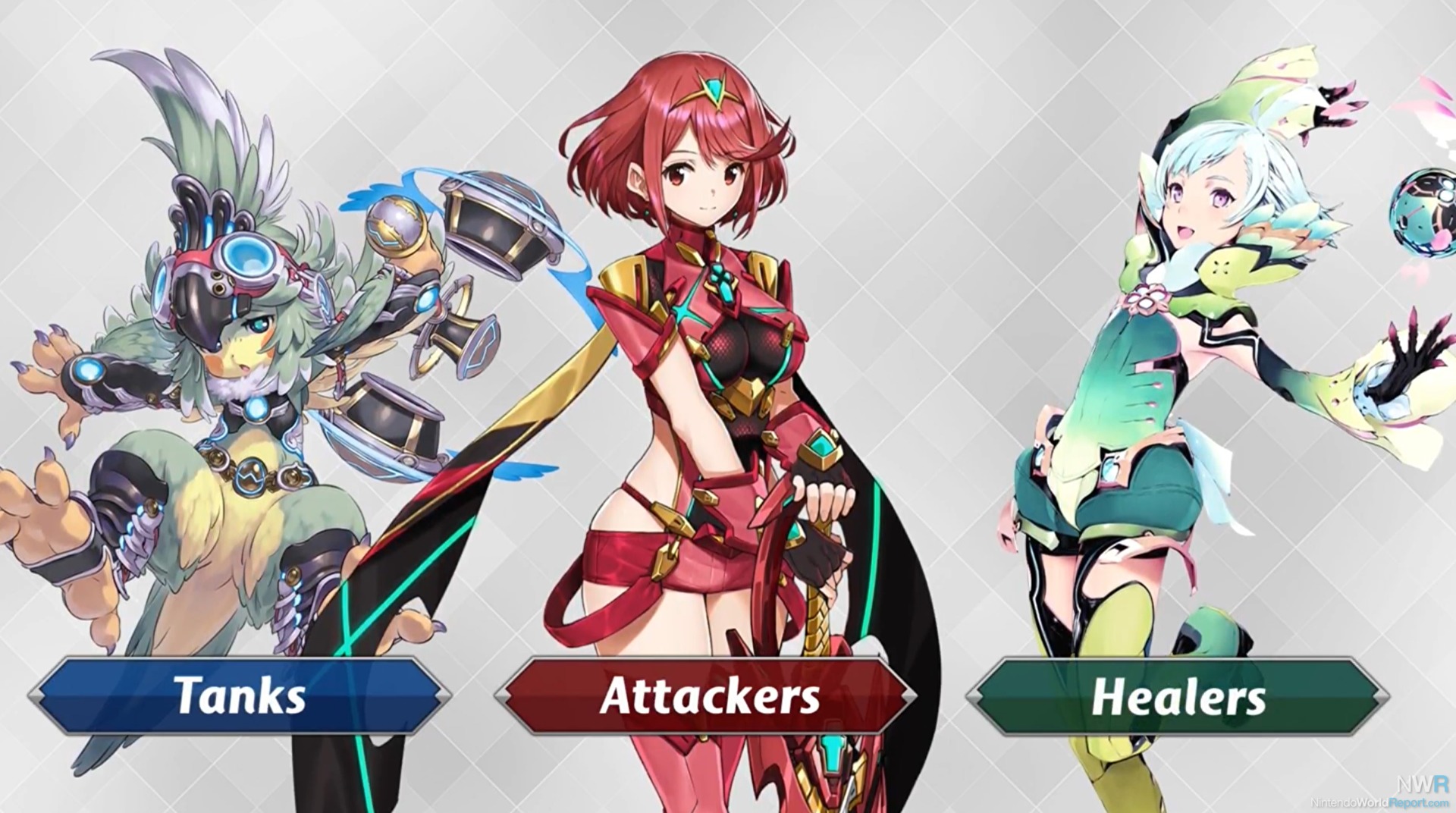 Watching the Direct brought a feeling of regret after having missed out on previousXenoblade games. At the same time, I’m incredibly excited that my first experience could be an absolute masterpiece. It’s almost impossible to think that in a year that we’ve seen the release of both Mario Odyssey and Breath of the Wild, that in a few weeks I could potentially be playing my favorite game of all time.

Im totally not sold on the game. I played Xenoblade 1 and X, but I didnt finish them because they got too difficult near the end.
I thought BotW was so much better than either of the games, so I dont have much interest in going back to another Xenoblade game any time soon.

Tremendous article, David! I liked how you related what we saw in the Direct to other RPGs.

I'm excited for the game, but the more I find out about it, it feels a little daunting. Systems on top of systems, etc. Plus, with the enormous scope of the game, it feels like it would take a lifetime to experience it all, especially if you're the type to take your time.

FYI, Monolithsoft created the engine for Xenoblade X, which was then used for Breath of the Wild. I'm sure they modify it as needed, but it's essentially the same engine. The crazy part is when engines are used for totally different types of games. I remember reading that Ocarina of Time used the Super Mario 64 engine.

I still have some reservations with this game, but that may be due to being too fond of Xenoblade Chronicles.


After the lacking narrative beats in Xenoblade Chronicles X, I'm cautious as if Xenoblade Chronicles 2 will rebound in that regard. So far, the premise looks more typical and stereotypically anime then past Xenoblade games (I gather that fans of Xenosaga and Xenogears are in more pain than I am). Not that that is awful, but it puts a damper on my expectations.


Speaking of anime, Nintendo just let Monolith Soft go wild with putting whatever Monolith Soft wanted with this one. All those Rare Blades just run the gamut due to most of them being designed by guest artists. The Xenoblade games have been criticized for the art direction of their characters. With Xenoblade Chronicles 2, it looks like Monolith Soft will do as it pleases. I, for one, enjoy that.