The only education we’ll be getting this month is how little sleep the human body needs. 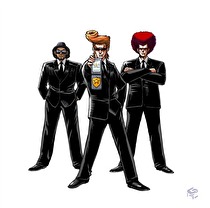 (Recommended musical accompaniment to this feature)

In June, the Wii U had its last major month of releases, with seven different games releasing during the month. What slipped a bit under the radar is that the 3DS had a busy month of its own – including the Rhythm Heaven Megamix bomb getting dropped in North America during E3, there were four retail-class releases for the system during that month.

A quarter later, the Wii U is still recovering from the flood, but the 3DS has held the charge and is ready to fire at will for the rest of the month. So sit back, crank the Earth Wind and Fire, and figure out just how to play everything coming to North American 3DSs in September. 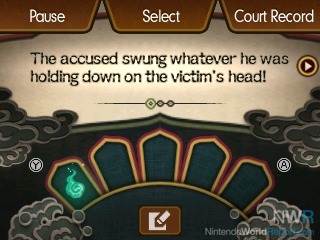 The sixth in the main series of Phoenix Wright legal dramas adds a dash of spirituality to the proceedings as Phoenix is forced to contend with a legal system that runs on séances. The sad thing is, given how previous games have gone, this is actually normal. By taking the adventure out of Ja… California, we’ll get to deal with some of the trickiest cases in Wright’s long legal career.

Recommended for: Visual novel fans, people who can tell the difference between a ladder and a stepladder

Not recommended for: The estate of Sir Arthur Conan Doyle 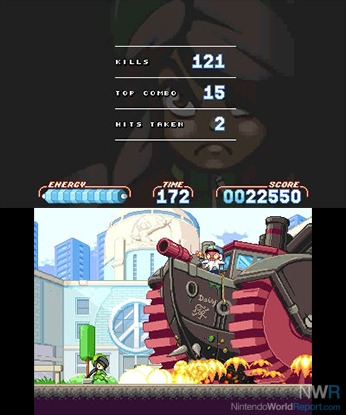 Noitu Love: Devolution bills itself as a return to classic arcade action shooters, but perhaps the closest comparison to this palindromic shooter is Gunstar Heroes. With mid 90s 16-bit graphics and manic action, this one looks to be a blast – and despite heavy use of touch control, it seems lefty friendly as well. Though you may be going for the Wii U version instead on this one, given what comes out the next day.

Recommended for: Anyone who loved 3D Gunstar Heroes last year

Not recommended for: The easily frustrated 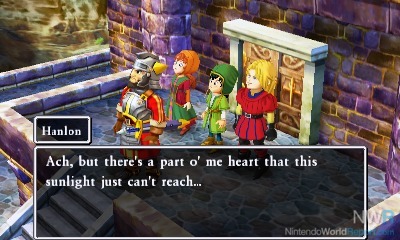 Dragon Quest VII: Fragments Of The Forgotten Past

The long, LONG awaited ground-up remake (improvement) of the 2001 PlayStation title streamlines a 100 hour game that took 30 hours to unveil its job system originally, adds in a dash of 3DS features such as StreetPass and mixes together for a grand adventure that has become quite common on the 3DS this year. But you should be able to polish this off… it’s not like there’s another major RPG coming out within a week or anything.

Recommended for: Those who love JRPGs and light time travel

Not recommend for: Anyone who freaks out whenever a Slime approaches. (Command?) 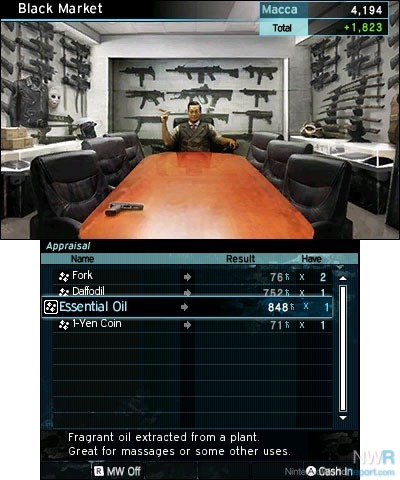 For those who prefer to kill gods and goddesses rather than use them to save the game, we can try to cause the Apocalypse. The follow up to SMTIV gives you added control over your party members in order to prevent stupid deaths, a new storyline that follows on from the 2013 hit, and a difficulty level that will no doubt cause many systems to fly across rooms. Might want to invest in a case when that demon takes all your money and runs.

Recommended for: Those who played Tokyo Mirage Sessions and want to untwist the acronym, masochists.

Not recommended for: Anyone who faints at the sight of Mara, the Automatic M. 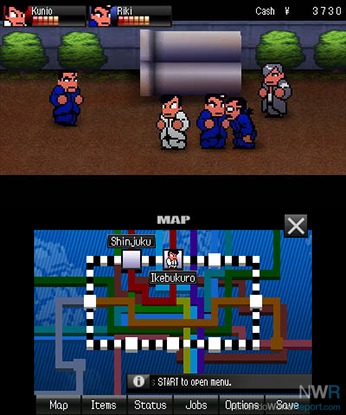 So basically the last week of September is nuts. River City: Tokyo Rumble marks the first follow-up to the NES game in over two decades, although the Kunio-kun characters have appeared in multiple sports titles and River City Ransom was remade on the GBA. Expect a fun brawler with a sense of humor and plenty of callbacks.

Recommended for: Brawler fans and those who got a lot of smiles back in the day.

Not recommended for: The Internationals. (BARF!) 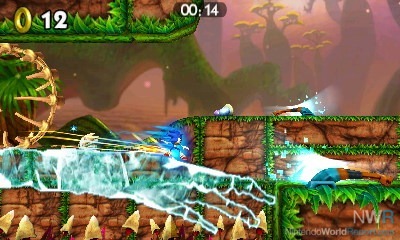 To say Sonic Boom games have a checkered history would insult the board game. The range of the 2014 titles was mediocre to Langrisser. But the 3DS title was the better of the two and Sanzaru is out to prove that Sly Cooper: Thieves in Time (PS3/Vita) wasn’t a fluke. With improved controls, tighter levels and special stages adapted from the best Sonic game ever, they may have a shot.

Recommended for: Platformer fans who already bought the next game on the list

Not recommended for: Those who cringe whenever Knuckles says “BOUNCEPAD!” 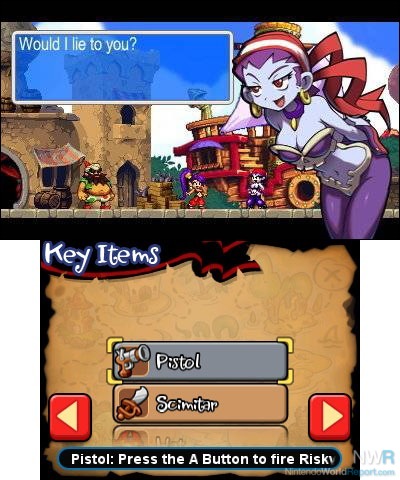 Shantae and the Pirate’s Curse

There’s a very good chance you’ve picked up Shantae and the Pirate’s Curse digitally already, given its appearance in this year’s Humble Friends of eShop Bundle (among other cheap sales). But if you missed out, or are afraid to download anything big on the 3DS, you can grab one of 2014’s most under-appreciated games in store with some nice bonuses as well (plus new content and the same great use of 3D.)

Recommended for: Anyone who missed the Humble Bundle for whatever reason.

Not recommended for: I think Zach has enough copies of this game, but the new content might get him to triple-dip (Editor’s note: It will - Zach) 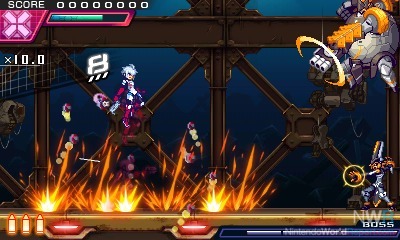 The last of the Nindie Summer Jam games to release is also a follow-up to one of 2014’s most interestingly flawed titles. Now with a couple more years under their belts, more playable characters and the need to put a certain Kickstarter disaster behind them, let’s all hope for more Mega Man 2 than ZX Advent and that some of the magic of their physical publisher (Yacht Club Games) rubs off on Inti Creates.

Recommended for: Mighty No. 9 backers who are looking for better than nothing (allegedly)

Not recommended for: People with R buttons on the verge of death 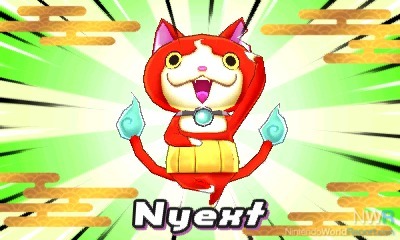 Originally, there was going to be a joke here about how there was no other competition on this date for the RPG dollar, but then SquareEnix did what many... ok, I expected and delayed Final Fantasy XV. So Yo-Kai Watch stands alone. The second game appears to be the highest-selling game in the series in Japan, and represented a huge leap forward in terms of gameplay, but will Yo-Kai hang on with Sun and Moon less than two months away? Or will the Springfield to Yo-Kai Watch’s Shelbyville triumph once again? Maybe Springdale should plant their own lemon tree.

Recommended for: People who quit out of the first game after two hours

Not recommended for: Haters of late-stage capitalism

I always appreciate the humor in your articles and enjoy your writing in general. Thank you.

I've been wanting to play a game on its release for awhile. I tried with Rythm Heaven Megamix, but I'm terrible at those games, and got stymied at the first coin flip boss challenge. I'll give it another try with Dragon Quest and Tokyo Rumble.

Not so bad for me. I'm getting DQ7 of course, and I'm waiting to see on Gunvolt 2 and River City.

A sonic game.....
yayyyyyyyy
Because Sonic Boom is still such a good and cost effective idea...
sigh you wonder why you went bye-bye Sega you wonder why.

It's funny, I'm very excited for SMT4:A even though I don't plan on playing it for at least a year or two. I've been picking up all the Atlus games when they run those huge sales, but I haven't played any yet because of their reputation for difficulty. They really sound like something I'm going to enjoy, but I'll need to concentrate on them. I assume I am running through the games I am playing (much) more quickly than I will Megami Tenseu or Etrian Odyssey, so I'm putting them off to the backend of what I plan on playing on the 3DS. If those games and Xenoblade Chronicles are as good as they sound, I could conceivably what on the NX until I see a bundle I want, or a Christmas sale.

Ace Attorney is all I need

Did you listen to the musical accompaniment you linked to? Because around the 1:10 mark it starts to sound pretty awful. Although even before that, its got some iffy moments.

We had what, twenty minutes of warning that it was coming? This was back-burnered for a bit when the Direct got announced.

I started 7th Dragon III Code: VFD last weekend and I'm hoping to finish that by Friday, because I really want to play Dragon Quest VII right when it comes out. I'm almost certainly going to get SMT IV:A at launch as well. If the talk of Yo-Kai Watch 2's battle system being an improvement over the first game ends up being true, then I'm also probably getting that. It's going to be a great month for the 3DS.

It's funny, I'm very excited for SMT4:A even though I don't plan on playing it for at least a year or two. I've been picking up all the Atlus games when they run those huge sales, but I haven't played any yet because of their reputation for difficulty. They really sound like something I'm going to enjoy, but I'll need to concentrate on them. I assume I am running through the games I am playing (much) more quickly than I will Megami Tenseu or Etrian Odyssey, so I'm putting them off to the backend of what I plan on playing on the 3DS. If those games and Xenoblade Chronicles are as good as they sound, I could conceivably what on the NX until I see a bundle I want, or a Christmas sale.

Depending on which of the games you've picked up, I wouldn't worry about that reputation too much when you're thinking about starting them. SMT IV is difficult in the sense that your party can get one-shotted more often than in other JRPGs if you're not paying attention, but it's not much of a problem as long as you save often (especially in the beginning). It's challenging for sure, but not "I'm about to throw this 3DS at the wall" difficult. I haven't played any Etrian games myself yet, but based on what Guillaume has said on RFN, the newer games like Etrian Odyssey 4 and the Etrian Odyssey Untold games are much more beginner friendly (or at least have beginner friendly difficulty settings). I think a lot of the reputation for these games being difficult comes from their DS entries.

Cool, thanks. I was worried about getting bogged down in guides and OCDish power gaming. I have Overclocked and SMT4 & EO4 and Millennium Girl. I plan on getting more.

Devil Survivor Overclocked is an "enhanced port" of one of the DS SMT games and I've never heard that game described as anything other than difficult, so that may be one where the reputation is well earned. I didn't get far enough into it to hit this part before getting distracted by other games, but it supposedly gets very difficult towards the middle and the end. It's a cool take on tactical RPGs and has a really interesting story/premise though. I want to go back to it myself at some point.

I was worried about getting bogged down in guides and OCDish power gaming.

Oh yeah, these games will definitely do that to you.

Overclocked is very difficult but it's a fairer difficult than some RPGs. There are no instakill moves and you can switch out the abilities of all your playable characters between battles in case you want to change how you've built them.

Interesting, thank you both for the advice. I find the SMG storyline and demon summoning conceit intriguing, so I'm really looking forward to playing these.