1. The Mii Population of Japan and America is 100 Million

Iwata - Today we’re going to continue the trend we started last year of doing “Iwata Asks Live (※1).” Since “New Super Mario Bros. Wii” (※2) was released yesterday we felt that our theme should be “Mario”, but we’ve already done a “Mario” “Iwata Asks” that was put up on the home page just the other day, so we felt it would be more beneficial for all of you to get to hear stories from hard working devs closer to your age, so we’ve brought together the devs of “Tomodachi Collection” today. I’m sure Minamoto-san needs no introduction, so how about everyone explains one by one what they did on “Tomodachi Collection”. First up, Takahashi-san.

Takahashi - My name is Ryutaro Takahashi, nice to meet you.

Attendees - Nice to meet you.

Iwata - How many years have you been with us, Takahashi-san?

Takahashi - This is my 8th year. I was the director of “Tomodachi Collection”. I came up with designs with my boss, Yoshio Sakamoto (※3), managed schedule and the like.

※3 Yoshio Sakamoto＝ Member of the Planning and Development Division. Producer of “Tomodachi Collection.” Worked on titles such as “Balloon Fight”, “Famicom Detective Club”, “Card Hero” and the “Metroid” series.

Okamoto - I’m Mai Okamoto, and I’m in my 5th year. I was the design director. Nice to meet you.

Itou - Hello. My name is Asuka Itou and I handled the BGM. I’m in my 4th year. Nice to meet you.

Iwata - All right, before we get started, I don’t think there’s any way we can avoid explaining just how Miis were born, so I’d like to explain that first.

This was also touched upon by Takahashi-san in “Iwata Asks - Tomodachi Collection”, but Miyamoto-san had been saying for years that “we could definitely do some interesting things if we could use avatars in a game”, and that eventually culminated in Miis.

So now Miyamoto-san, can I first ask you what it was that you felt would open up new possibilities in the game world by bringing avatars in? For your information, Miyamoto-san often draws portraits of other people during meetings (laughs). 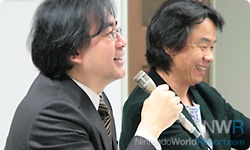 Iwata - So please tell us, in addition to that, and I’m not sure how related this is to Miis, but what it was that made you think about avatars in the first place?

Miyamoto - First I think I should let you know that I’m not particularly good at drawing other people. In fact, if I had to choose between good or bad I’d tell you I’m rather bad at it. So I was always envious of people who were good at it, and even though I’m bad i always enjoyed drawing other people from long ago, so when I would get lots of people’s business cards in meetings, even after organizing their cards I would forget which face went with which name, so when I got their cards I would use a pencil to draw, maybe not proper portraits, but their defining characteristics quickly.

And so getting back to Miis, Takahashi-san and crew were working, how many years ago was it? When making the Wii 4 or 5 years ago…

Iwata - The main functionality of the Wii was being developed mainly at the beginning of 2006, so exactly 4 years ago.

Miyamoto - Just a bit before that, Takahashi-san’s team had introduced some software that they had integrated avatars into. Looking at the members of “Tomodachi Collection” here, Takahashi-san is the oldest, isn’t he? I was just reminded of that and surprised - this title was made up of such a young team.

Anyhow, I feel that the fun in games comes from the players holding various interests in interactive things and continuously playing around with those things. So I think the ultimate game is CAD (※4). 3D CAD for industrial design in particular is something I just can’t get a grip on, but I think it might be the perfect toy.

Iwata - Miyamoto-san was originally an industrial designer, so he’s the kind of person that comes up with his own scale models when building his own house. As such, for Miyamoto-san, the kind of system that allows him to freely design 3D objects is a wonderful toy.

Miyamoto - CAD is incredibly useful, right? So, during the Famicom days I wanted to create an easy to use 2D tool, and during the Nintendo 64 I thought it would be great to take on the challenge of creating a simple, useful 3D tool, then sell that to people building their own houses saying, “in commemoration of your new house - we present you with an N64!” (laughs)

Miyamoto - In that sense, too, I think that CAD tools might be the ultimate interactive game, but I’m always told “you just think that cause you like to draw - it’s no fun for people who can’t.” But it’s people who can’t draw that are even happier when they manage to, right? Those who are already good at drawing aren’t particularly happy if they fail to draw something, but maybe for someone who isn’t good at drawing to get a chance to think, “even I can draw!” - they’d be happier than someone who is good at it.

So I originally wanted to get across that fun and happiness that comes from being able to draw, and from the Famicom Disk System days save data began to get a little bigger, so I wanted to make some kind of tool that you could draw with. At that time what held my attention was portraits of people. Drawing people’s likeness, by nature is this thing where, you show people something you drew on your own, involving the people around you, with the possibility to quickly spread. So I tried different software where you could create portraits, but they never really made it into a product. During the GameCube days we considered things like using the e-Reader (※5) to swipe cards that portraits would display from, or by taking a photo with the camera (※6)…

Iwata - You’d be able to apply your facial photo to a 3D model.

※5 e-Reader＝Accessory for the Game Boy Advance. By reading in 2D barcodes printed on e-Cards players were able to enjoy mini games or add new content.

※6 Camera＝ A camera called the “Game Eye” that was scheduled to release for the Game Boy Advance. Players would have been able to take their photos and load their faces into the GameCube, and play “Stage Debut” (never released).

Miyamoto - Right. We tried those different things, but whenever I’d actually ask a director to create an editor tool it would get more and more high-powered. “It wasn't fun just creating portraits, so we made it so that you could dress up in different outfits.” However I don’t feel that things get more interesting the more work you put in. Rather, I’m the type that feels that things are more interesting if just by doing something small people notice something kind of weird, or you resonate with people. So I wanted to make that kind of tool, and when we got to the Wii, I tried to make a game where players would use a kokeshi doll kind of thing.

Iwata - You called it the “kokeshi plan” back then. 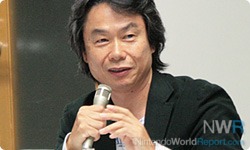 Miyamoto - Right, the “kokeshi plan”. When we decided to make the baseball game in “Wii Sports” (※7), we felt that, rather than scanning in a picture of a Major League player and making a realistic, muscular character, it would be more interesting to play with a character that was a clone of the player, with a kokeshi-like build. Because of that, you’d see a kokeshi on the screen during development. And, having never learned, that’s when I would say to Iwata-san, “it would be nice if this kokeshi could become all the different members of your family.” And just around that time there was a special on TV called, “Why are portraits so similar to their subjects?”, which was really close to what I was thinking.

To put it simply, everyone has different parts to their face - some people have large eyes, some have small - but rather than what kind of parts a person has, the impression a face gives off changes depending on how those features are arranged. They say that there’s a “standard facial image”, and you recognize a person from how different the parts of their face are from others. In other words, portraits can look very much like a person even if the shape of the face or the actual parts don’t match, so long as the eye placement, eyebrow placement, nose and mouth placement are well done. They explained that on that program and I thought that was interesting.

Because of that, I wanted something simple like that, and we tried to implement it with the kokeshi, but we were in the final stages of developing the Wii and thought “what should we do?” when Iwata-san brought in the Mii editor that would be the progenitor of “Tomodachi Collection”. At the time it was running on DS, but I thought “THIS IS IT!” and told Iwata-san, “I want this”.

Cheers Matt, you're doing everyone a service translating these interviews and for that we are very grateful.

I didn't know that Miis originated on DS then were moved to Wii rather than the other way around.

You got it! Glad you're enjoying them. ^^