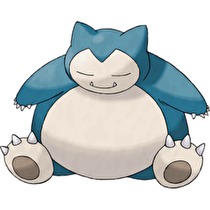 Until encountering Snorlax on Route 12, I had never seen such a large Pokémon. Snorlax’s overwhelming size and his seemingly never-ending HP bar lead me to believe that Snorlax had to be the strongest Pokémon in the game. After failing to capture Snorlax on Route 12, I gladly offered the games only master ball to the Snorlax and was overjoyed once he was mine.

Snorlax immediately became the highlight of my team. I was thrilled at the amount of TMs and HMs the tubby green bearlike pocket monster was compatible with. I was unstoppable. Being able to rest and regain HP added to Snorlax’s legendary status in my mind. I could keep fights going, causing my opponent to waste their PP, then being free to head butt them into oblivion. With Snorlax at my side, I could win every fight, move boulders, traverse oceans. With Snorlax at my side, I was the very best. I was the Pokémon master.

If you click on the link, you can see the list of Pokémon chosen. In case you were wondering, Lucario isn't one of the chosen.

If you click on the link, you can see the list of Pokémon chosen. In case you were wondering, Lucario isn't one of the chosen.

But his popularity speaks for himself, Smash, Pokken and in pretty much EVERY Pokemon Spin-off game.

Great lists, guys. I certainly respect the Xatu choice- there are so many Pokemon that look super cool but lack in the power department. However, every Pokemon serves their use, which is why (excluding my two "rule of cool" choices, Lugia and Charizard), my top two favorite Pokemon are:


Granbull- I am a pug owner. While Snubbull is the more adorable of the two puggish Pokemon, Granbull is scrappy and has awesome defensive typing, coupled with high HP and Defense. You can even repurpose Granbull into a solid physical attacker with his impressive bulk, unreliable-yet-potent Play Rough, and a slew of other physical attacks not normally found in Fairy types. Altering his type in X and Y is possibly the greatest thing that could have happened to Granbull, as he is now a threat to a number of other offensive types and soaks up Dragon hits. A new lease on life solidified this pink powerhouse on my team.


Zoroark- I'll admit, I love foxes, too. Vulpix was one of my most sought-after Pokemon in the Red and Blue days, but its fire typing and low utility crippled its use. However, upon first seeing Zoroark, I was in love. A dark fox with wicked claws and offensive typing that allow it surprising viability, the most delightful aspect of this Pokemon has to be its ability, Illusion. IT'S SO COOL. I love playing mind games with other trainers (who expects an Abomasnow to suddenly spew Flamethrower?!), and because of its speed, Zoroark often gets a leg-up on opponents with its varied moveset, keeping them guessing. Although it's a more recent Pokemon, it's positioned itself high on my list because of its unique attributes.

I see a lot from earlier generations... nice job!