A wild Game Boy game, Monster Hunter Frontier G and even Final Fantasy II (Famicom) all make appearances on the eShop this week. 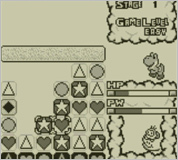 Nintendo’s latest firmware update to the Nintendo 3DS is now out in the wild, but it hasn’t been without issues. The eShop in Japan is spottily available as of the time of writing but should be up and fully functional by the time you're reading this. Regardless of the hiccups with the eShop, there still are quite a few quality titles that came out this week. Puzzle and Dragons Z along with escapeVektor both hit the service today on 3DS and Yoshi Panepon (released in the West as Tetris Attacks) adds another Game Boy title to the Virtual Console library. The Wii U is also getting some love this week with the release of Monster Hunter Frontier G for free (with monthly fees) and Final Fantasy II (Famicom) arriving on the Virtual Console. For a complete list of this week’s releases, check out everything below!

One of those VC games is worth playing a lot. The other is Final Fantasy II.