This week is all about Sega, Nintendo and Capcom. 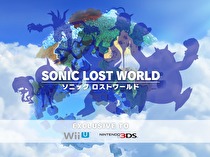 Hold on to your butts. Sonic Lost World is here for better or worse (you can read our reviews here and here). On top of that, Sega is still giving us something else to nibble on with Nazo Puyo 2 on the Nintendo 3DS Virtual Console, Capcom offers the fourth Game Boy entry for the Blue Bomber, and Nintendo throws a few early NES sports games our way. Check out everything that was released on both eShops in Japan below: