Mario is in the eHouse and we have hands on impressions with Hiku Osu. 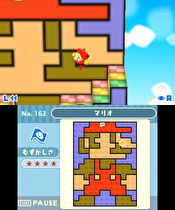 This week is a rare slow week for the eShop in Japan, seeing only one Nintendo 3DS specific title. However, there are a few new streaming videos that can be viewed on the eShop. Here is a look at everything that hit this week:

While there are no new 3D streaming movies on the eShop this week, Nintendo did add channels for two of their biggest Wii titles of the year - The Legend of Zelda: Skyward Sword, and Hoshi no Kirby Wii (Kirby’s Return to Dreamland in North America). The Skyward Sword channel features a trailer for the game, Satoru Iwata interviewing Shigeru Miyamoto about upcoming title, and a video overview of an early area, the Faron Woods. The Kirby video channel has two videos. The first video talks about the basic points of the game including the various powers the player can get, the ability for other players to join and drop out at any point, and so on. The second video is a collection of two 30-second commercials for the title.

Last week’s Intelligent System developed puzzle/platformer, Hiku Osu, hit the eShop last week and has been received very positively. I had the chance to purchase the game and put a little bit of time into it. As stated above, this is a hybrid puzzle/platforming game where the player controls Malo as he tries to get to the top of various platforms to reach trapped children. The name Hiku Osu translates roughly into English as, “Push and Pull,” and that is exactly what the player is doing throughout this game. To get to the top of each area, the player has to figure out which blocks to push and/or pull inwards or outwards to enable them to reach the top. Players control Malo with the Circle Pad, jump with the A button, and are able to push or pull blocks by holding the B button and the desired direction. The L button provides gamers with a rewind function (à la Prince of Persia and Catrap) and the R button zooms out to give the player a better look at the puzzle.

The early stages in the game are pretty easy, and can take just a few seconds to complete. However, the deeper you get into the game, the difficulty and the amount of time spent per puzzle increases drastically. Later on in the game as well, gamers have a chance to complete puzzles that are shaped in 8-bit-like versions of characters, such as Mario. Not only this, but players can also create their own puzzles. From the hour that I have spent with this game, it is clear that this game is very addictive and something that will appeal to many people. The cute art style and simplicity make it an extremely accessible game. As of right now, unfortunately there is no scheduled release for territories outside of Japan. If you have a Japanese 3DS, you can download the Hiku Osu for 700 yen.

Thanks for the impressions. I hope Hiku Osu comes stateside