Get ready to race in the third dimension! 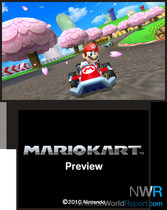 All that has been shown of Mario Kart 3DS thus far is a trailer, consisting of Mario and Luigi racing around various locales. Of course, without the true 3D effect of seeing the game from the 3DS itself it's hard to judge, but there looks to be a lot of courses with visual effects designed specifically to add that extra little touch of depth.

One track shows the brothers racing through a park lines with sakura trees, their pink petals filtering down around the karts as they zoom past. Another features a track make from a wire mesh, with a vertigo-inducing view of a gaping chasm far below. Players get a sense of how high up they are, and then all too soon the wire track runs out and the karts go plummeting down to earth. Another course winds between trees in a forest, with fallen logs hanging overhead as the karts narrowly zip underneath.

Most interestingly, the footage also showed the Mario brothers racing around what appears to be Wuhu Island, Nintendo's fictional island resort made famous in games such as Wii Fit, Wii Sports Resort and most recently, Pilotwings Resort.

The only items shown in the trailer were the Banana, as Mario hurls one at Luigi from behind, and the Blooper octopus, which appears to spray ink onto the screen in the same manner as it did in on the DS and Wii incarnations of the series.

At E3, we can likely expect a playable demo of the game, as it is no doubt nearing completion after a promised retail release this year. A release date can be expected, as well as possibly a new trailer.

I have literally been waiting for this game since Paper Mario: The Thousand Year Door. The Paper Mario games are my favorite games ever. Nothing else is better to me.