The first attempt at Wii control

As I mentioned earlier, after the pointing experiment, I thought the feeling of aiming at the screen with the bow and arrow was convincing, so we started polishing this control. What Miyamoto wanted to accomplish first of all with this control was to eliminate the 3-D stick as the camera control in the GameCube version and make it into something simpler where the camera could be moved using only the pointer. I think those of you who have worked on an FPS will understand, but it was a reoccurring issue with existing camera controls where there are two styles of control. There was the joystick style, where tilting the stick forward would move the camera down, and tilting it back would move the camera up, and cursor controls, where the camera would move in the same direction that the stick was tilted. Neither control style was really acceptable. It was our goal to create a solution for this and to this problem. 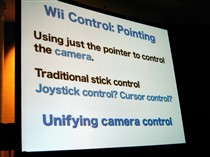 Please watch this movie where the boomerang is being used. When the boomerang is being held, in the center you can see a circular mask appears. If the pointer is moved within this area, the camera will not move, but if the pointer is moved outside of that area, then the camera will move in that direction. A camera that rotates in the pointer’s direction is unlike anything that had been used before and took some time to get used to. But because we were able to point in the direction that we wanted to look and cause the camera to move, we felt that this was a very direct and effective control style.

Next, the motion sensor. I had been thinking about direct controls like swinging a remote to have Link swing his sword and wanted to push the experience of playing even further. When we tried changing the camera perspective from one that normally is in third person to one that switches to Link’s first-person perspective in battle. Please watch this movie. For this prototype, all we did was change this perspective to the first-person view we currently had. We haven’t tweaked things like the spacing between Link and enemies, so it’s really awkward, but having played this version in first person, we didn’t think this was the most effective way of presenting battles. Link normally has a variety of movements, but when he enters into battle with his enemies, which has come to be known as core scene in Zelda, if that variety is lost, it feels very strange.

So, we brought the camera back to the third-person view and swung the Wii remote like a sword. This time we saw problems that we hadn’t noticed when the camera was in the first-person perspective, and we made the decision to abandon using the motion sensor to swing the sword. The reason for this is that the player character of Link is left handed. You see, when a player had the Wii remote in his right hand and swung it, it felt strange because on the screen Link would swing the sword that was in his left hand, and this was something that couldn’t be avoided. This might seem trivial, but the act of shaking the remote is a control that the player physically experiences, and if it doesn’t match up with what is happening on the screen, then it becomes something that has no effect at all, and ultimately this becomes something that is considered extraneous control.

Because the sword control was the most direct in Zelda, it was the one that we most wanted to implement, so we were very disappointed that we could not use it. We settled upon the assigning sword swinging to the B trigger played in the past. In addition, because there are no X or Y buttons on the Wii, which were used as the item buttons on the GameCube, though it takes a little time to get used to, we assigned left, right, and down on the plus control pad above the A button for this. Consequently, we added one more button than in the GameCube version, and by making decisions like this, we were confident that we had created something that was not inferior to the GameCube version for the Wii. Feeling that the structure of the Wii version was finalized, we put a playable version on display at E3 2006 and awaited the response in Japan.