Why Persona 4 Golden Needs to be on Switch - Timeless Games

Atlus has been nothing short of prolific in their development of RPGs, especially those of the turn-based variety. None, however, have reached the heights of popularity like their Persona series, games featuring a protagonist who transfers to a new school, befriends a bunch of his or her classmates, and eventually enters a demon-filled netherworld. For some, that may have been their typical experience in high school, but it's uncanny how well Persona 4 simulates the life of a 16 or 17-year-old student. The combat, story, music, and gameplay are all excellent in their own right. But it's the cast and residents of Inaba, the game's setting, that truly make it Golden.

Golden, sure. Timeless, though? I had known since the original PlayStation 2 release of Persona 4 that it was a highly-regarded title. The PlayStation Vita remake that added "Golden" to the title, in addition to major content and gameplay changes, really put the game on my radar. I wouldn't play either version when they launched, but I did eventually pick up a second-hand Vita off Craigslist for the sole purpose of finally hopping not just into Persona 4 Golden, but Persona 3 and other RPGs I hadn't played in some time. Persona 4 really does feel like a perfect mix of simulation, story, and strategy, and each of those elements harmonizes elegantly with the other two. Taking time to cultivate relationships unlocks more plot points but also makes your characters and minions stronger. Do you choose to spend time in dungeons fighting enemies for experience and money, or do you visit your classmates and help with their problems? It turns out that both paths are viable.

The silent protagonist, who is named by the player at the outset, serves as a magnificent foil to the mostly voiced cast. Named Yu by default, he functions mostly as a blank slate, defined by the countless dialogue choices present throughout the adventure. However, his relative plainness amplifies the charm and effervescence of his circle of friends. Personally, no pun intended, I would argue that the entire playable cast, and even Yu's new found family in Dojima and his daughter Nanako, represent the true soul of Persona 4. Their presence makes the game a real joy to experience, and it's no easy task to say goodbye to them after spending over 60 hours at their side. 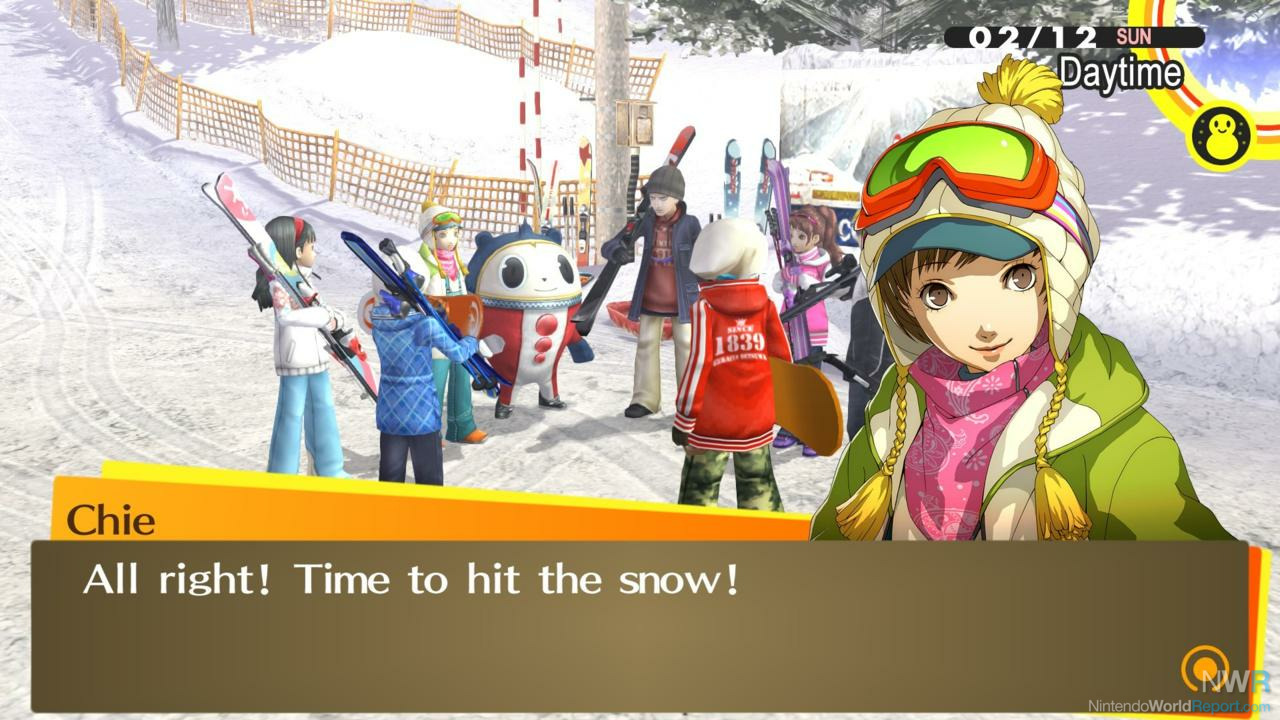 She may not join your party, but Nanako, who refers to the player throughout the game as Big Bro, is its beating heart. She has a tragic backstory, endears herself to everyone she meets, and carries herself with a blend of child-like wonder and experience beyond her years. Living without a mother, in some ways she's had to grow up too fast, especially with her father spending so many late nights at the office as a police detective. Her Social Link, which is essentially a series of cutscenes that are unlocked and contribute to a meter symbolizing your bond with her and every other character who has an S-Link, allows you an even deeper glimpse into the loneliness she feels, being somewhat held at a distance by Dojima. She is a person who has endured but can still take pleasure in the simple things, like trips to the neighborhood grocery store, Junes. I love her, and I can readily admit that replaying Persona 4 after becoming a father has made me even more sympathetic to her situation and galvanized towards making her happy.

Nanako doesn’t fight alongside you, though. Yosuke, your punching bag of a partner, does, and although he may not be a crowd favorite, his dedication to the team and to Yu is laudable. The next to join the team is the spunky, Kung Fu movie-loving Chie, whose toughness hides insecurities about her self-worth, constantly comparing herself to the next character. Yukiko, heiress to the Amagi Inn, is often reserved, but also has the propensity for fits of laughter at the slightest joke. Kanji arrives on the scene as an apparent bully or misfit, but his journey of self-discovery reveals an inner struggle between who he wants to be and how he will be perceived as a result. The penultimate member of the squad is former idol Rise, who has to come to terms with leaving the fame and spotlight while simultaneously attempting to fit in at a new school and avoid being recognized as her alter-ego Risette. And finally, there’s Naoto: both the Detective Prince and a walking paradox of mature and naive. Every one of these characters contributes to the overall narrative in meaningful ways while also bringing satisfying and engaging individual tales of their own.

It’s always a delight when the dialogue of a lengthy RPG is buoyed by voice acting, let alone the work of Persona 4’s superb cast. Each one seems an impeccable fit and unceasingly brings the town of Inaba and its inhabitants to life. The writing and localization further add to the realism, giving the actors a solid foundation to work with. And again, it’s the silence of the protagonist that allows the voices of his friends and family to resonate even more poignantly. Even though the player character’s dialogue is voiceless, the reactions to it are resounding: the emotion in Rise’s voice, the excitement in Chie’s, or the exuberance in Teddie’s. You’d be doing yourself a disservice to play the game without audio, and that brings me to my next topic…

The outstanding soundtrack! Persona 4’s music is among the best I’ve ever heard, and it’s incredibly well suited to listening outside of the game. Composed by series staple Shoji Meguro, among others, this soundtrack absolutely soars, and adds a flair and vitality to an experience already filled with both. The upbeat jazz and the memorable notes sung by vocalist Shihoko Hirata come together in a tidal wave of nostalgia-inducing harmony. I’m not lying when I say that the in-game winter season’s theme, Snowflakes, has the power to bring a tear to my eye, seemingly at any time of day; it’s beyond compare. 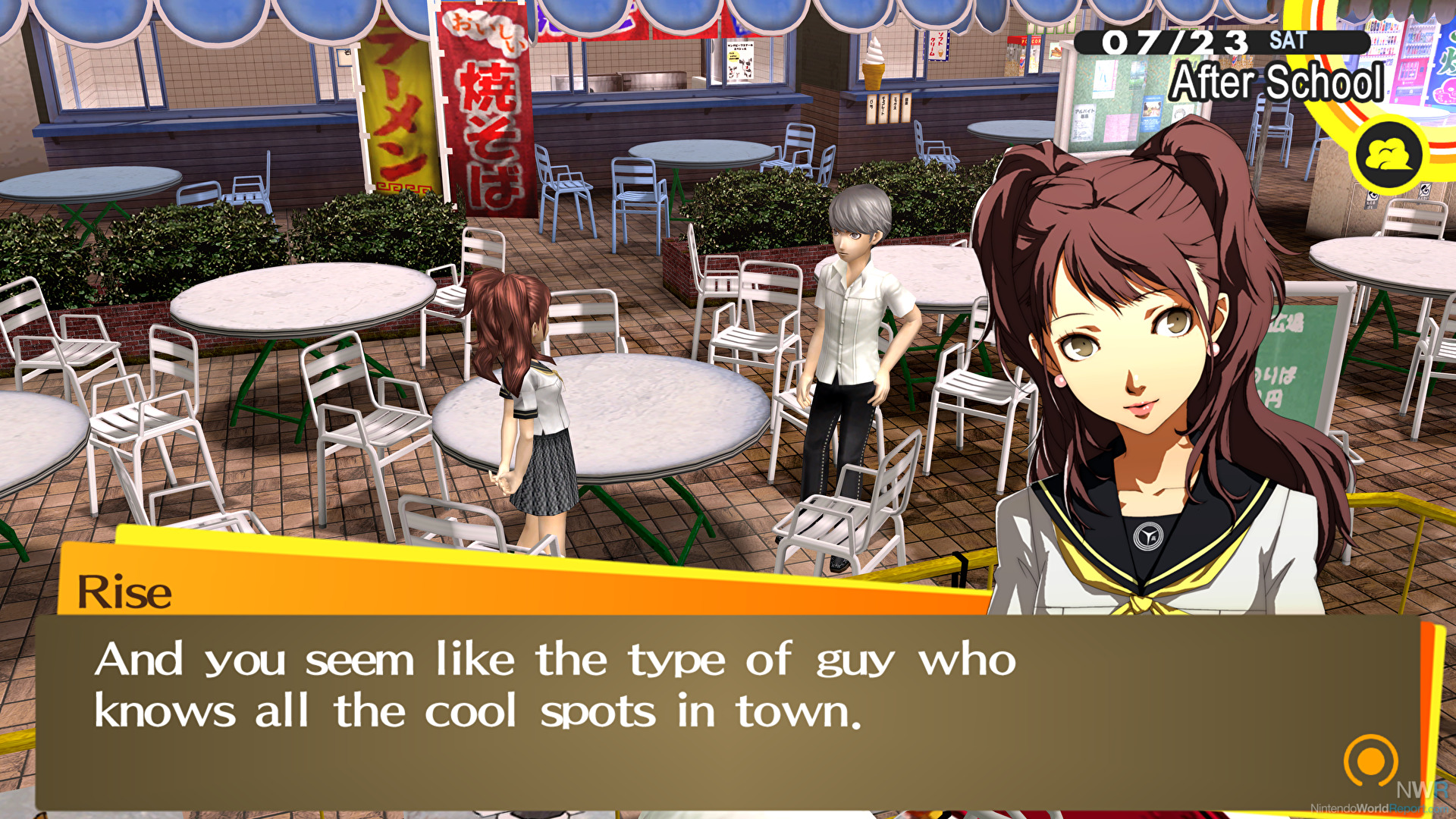 Leaving any real mention of the story and combat of Persona 4 to this point is not to be taken as a slight against either; instead, for me, they are just somewhat overshadowed (pun fully intended) by the elements I’ve already discussed. The mystery at the heart of it all is compelling, and will certainly catch players by surprise. The structure of weaving everyday school life with rescuing people from a nefarious world hidden inside a TV turns out to be a winning combination, even if the former seems to dominate much of the game’s runtime. Final exams take up multiple in-game days, with no option to explore or converse with classmates after each day’s academics are through. This seems an effective parallel to one’s real life school experience: exams can be draining, both mentally and physically. We don’t always feel like hanging out or playing sports after a day filled with essay writing and multiple-choice questions. Even after finishing the game multiple times, I continue to be impressed with the way in which Persona 4 has the power to transport me back to my own high school and college days. And few video games have taken a fully formed and comprehensive in-game calendar and made it so engaging. That is to say, at worst stress-inducing and at best a careful planner’s dream.

At last, we arrive at the combat, which on the surface is a standard turn-based affair where characters act according to a set order that doesn’t change during battles. On the plus side, this consistency allows for effective strategizing: of your four-member party, one can attack, one can cast a healing spell, one can use an item, one can guard to protect their weak spot from the enemy’s attack. While the dungeons are fairly simple, the core mechanic of Personas sees each character assigned a single demon that bestows powers upon them, with the main character able to acquire new ones after combat or through a demonic alchemy of sorts. All of this represents another layer of depth within an already multi-faceted game. Fusing Personas to create stronger ones actually connects with the aforementioned Social Link system; deeper bonds with specific characters imbue your newly-created demons (of the same affiliation) with greater power. If you know, you know; if this is unfamiliar but perhaps intriguing, find a way to experience all that Persona 4 has to offer as soon as possible.

With some video games, returning to them after time passes shines a brighter light on their strengths and the qualities that perhaps made you fall in love in the first place. With others, changes in your perspective that may have resulted from life experience or familiarity with new works in their genres can taint, to some extent, what once seemed beyond reproach. Completing Persona 4 Golden again has only intensified feelings that I had been tip-toeing around for some time. In a word, I think this just might be my favorite game. It invades my thoughts, what with its infectious tunes and unforgettable personalities. I’m not just sad when it’s over. I legitimately feel crushed that, at least for a time, the friends I’ve made in Inaba are moving on with their lives, just as I have to do with my own. That’s the message, right? A slice of life is just that, and we can cherish it and recall it with fondness, but eventually we’ll be on to the next adventure. And I’ve done that. I’ll continue to do it. However, I won’t stop wondering if Teddie’s still living with Yosuke or how Yukiko’s doing with the family business. It really did feel like I was a part of their world, and now these characters will always be a part of mine.