The Timelessness of Arcade Donkey Kong

Nintendo’s savior still deserves the spotlight nearly 40 years after it first came to your local arcade.

Whatever your experience with video games, you probably have some knowledge of or spent some time with the arcade game, Donkey Kong. The premise and controls are simple but effective: save damsel in distress Pauline from the menacing Donkey Kong, a giant ape positioned at the top of the screen. Accomplish this goal by moving left and right, climbing ladders, jumping over barrels and flames, or even grabbing hammers to smash said obstacles. Like any good arcade staple, the real challenge was increasing your score as high as you could by collecting loot and clearing each stage as quickly as possible.

A documentary from 2007, The King of Kong: A Fistful of Quarters, even chronicled the back-and-forth high score battle for Donkey Kong supremacy, a contest that continues to this day. And not just with arcade games, but with console and PC games that have a defined endpoint: charity events like Awesome Games Done Quick bring together speedrunners from around the world to finish different games across different categories as quickly as possible. Ultimately, what these experiences have in common is a desire to be the very best at something, or perhaps just to improve one’s own personal best. Donkey Kong’s timelessness derives from the way it is still an incredible and challenging test to do just that.

Given that many arcade games only featured a joy-stick and one or two buttons, there weren’t all that many possible actions a player could take. What this meant is that many games would just remix the same stages over and over. Donkey Kong’s four unique single-screen stages, however, made it stand out from other cabinets of the time. They enabled it to unravel a more complex narrative across a variety of settings, each one throwing its own distinct obstacles at the player. In the case of the first stage, 25m, barrels are literally thrown at the player (Jumpman for the sake of simplicity) by Donkey Kong. The barrels can travel across the horizontal girders or even down ladders, meaning the player can’t always take the most direct route to the top of the stage. This opening screen is trickier than it looks, and surely it was responsible for a fair share of quarters regularly being jammed into the Donkey Kong cabinet.

You’d be forgiven for thinking that Donkey Kong only had three stages, since a number of the console ports of the game took out what would be the second stage out of the original four: the cement/pie factory. The NES version, for instance, didn’t have the brief interstitial between stages to even tell you that you were climbing from 25m to 50m to 75m and so on. Here, a barrel of fire in the center of the stage continuously spits out flames that roam around and make the third and fourth floors particularly dangerous. The second and fourth floors are also conveyor belts that carry what look like, to my mind, pies in pie tins, and these present another obstacle to leap over or smash with a hammer, all while dealing with the push or pull of the conveyors. 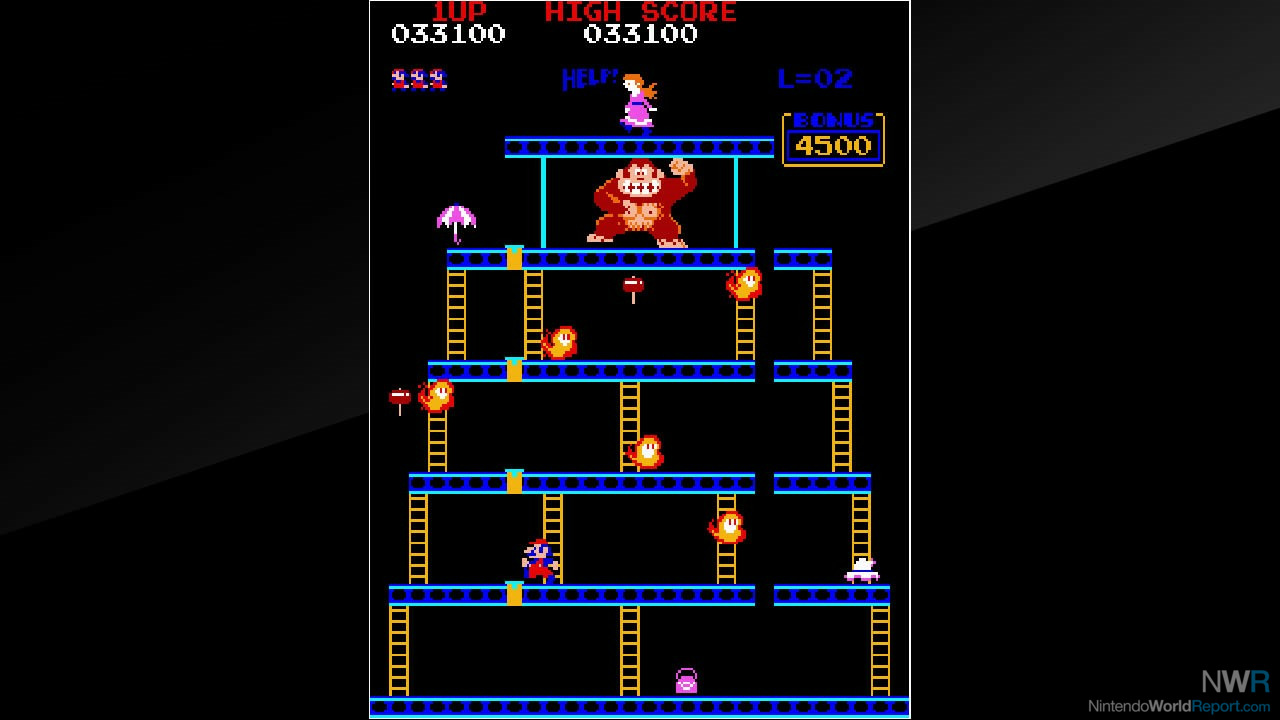 The third stage in the original arcade version brings elevators into the equation, making gravity one of the most dangerous foes that Jumpman faces on this screen. Falling down or leaping from too high up will cause the player to lose a life, with one credit giving you three lives in total (although extra lives can be earned by collecting enough points). While each stage has a specific sound effect to distinguish it from the others, the repeating bloops and long screech of the springs that travel from left to right and then down the length of the screen lend a particularly stressful atmosphere to the 75m stage.

The final stage before Donkey Kong loops back to the beginning is called Rivets or 100m (insert your preferred title here). The overall objective changes significantly from the other screens; here, you need to walk over a series of rivets connecting the girders that make up each floor. Upon undoing all eight of them, Donkey Kong tumbles head first to the ground and Jumpman finally succeeds in rescuing Pauline. Making this screen particularly difficult are living fireballs that wander around each platform and can still climb ladders. Another danger is walking into the gap created by a removed rivet, sending Jumpman careening to his doom. If you’re successful, Jumpman warps to the top of the screen next to Pauline, with a large pink heart symbolizing the lovers’ reunion. 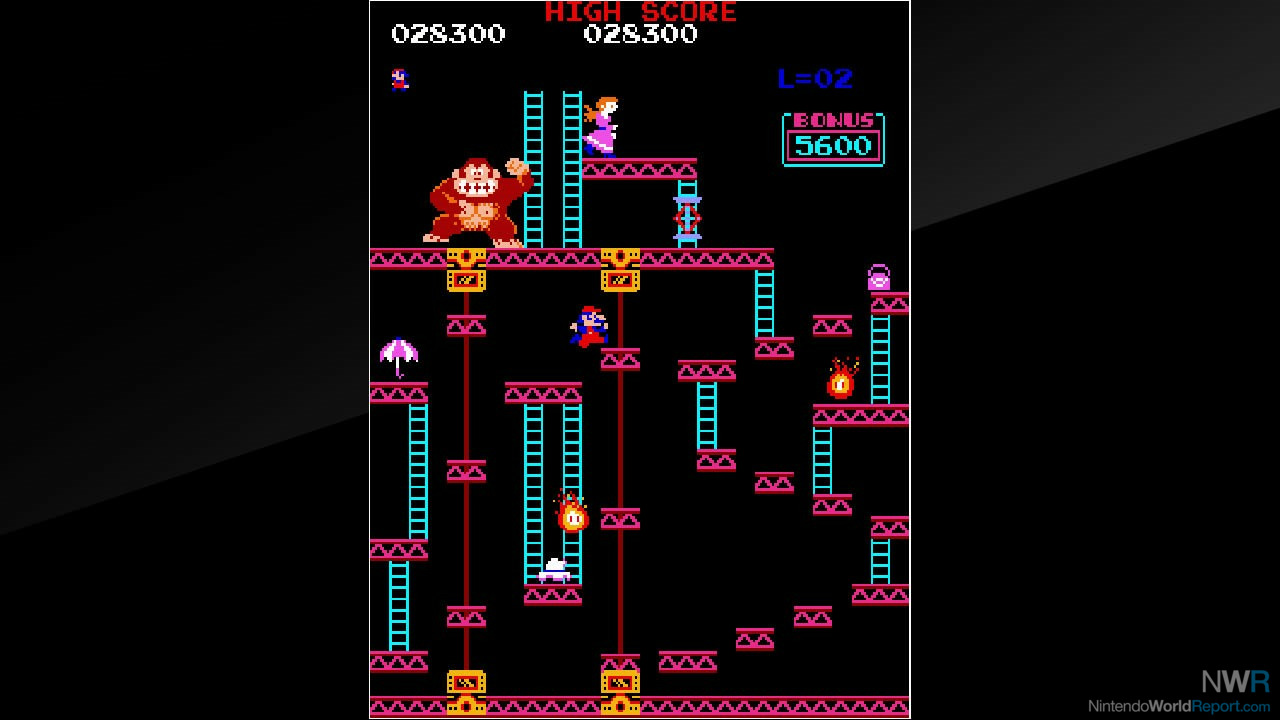 The color and sound of the Donkey Kong arcade game come together in perfect harmony, making it both ear and eye-catching to arcade patrons and their collection of unspent coins. Against a black background, the purple, orange and blue girders make the running and jumping actions easier since following Jumpman’s progress, as well as those of his would-be undoers, requires no strain of the eyes. The ladders, too, especially in the first, third, and fourth stages add an attractive contrast color that allows them to pop on screen. The sound effects, on the other hand, almost feel like part of the background with how they complement the looping tracks. This is true to a fault in the elevator stage as the sounds of the springs actually replace the music. Thanks to games like the Smash Bros. series, Jumpman’s iconic hammer theme, which plays when he leaps up and grabs a hammer item, has become nigh unforgettable. And it’s the sights and sounds of Donkey Kong, among other arcade classics and their explosions, flashes, bleeps, and buzzes, that makes the demise of the local arcade that much harder to stomach.

The first arcade I remember, and one I can still visualize to this day, was called Lazer Illusions, and it took up about half an Old Navy of real estate in one of the two local malls where I grew up. It had a handful of classic games like Mario Bros., Donkey Kong, and Ms. Pac-Man, but it also housed a dozen or more ticket redemption games, like Skee-ball and one where alligators would shoot out of holes so that you could smash them with a foam-covered hammer, a swamp-style version of whack-a-mole. Co-operative brawlers like the X-men Arcade Game and The Simpsons were always popular. Even though it didn’t last all that long, I remember being pretty crushed to learn that it was shutting down, paving the way for a store filled with boring clothes, replacing fun with fashion. 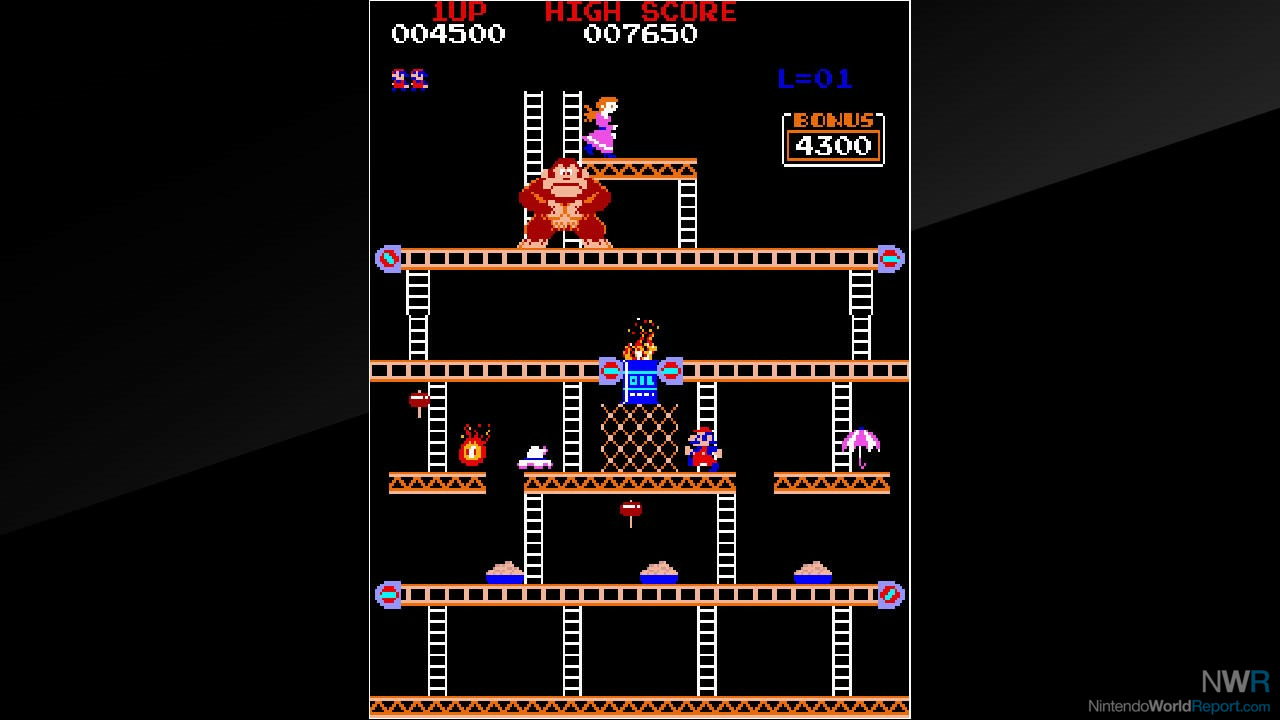 My fondest memories of Lazer Illusions include chucking a few quarters into Donkey Kong or one of the space shooters like Galaga. My friends weren’t as interested in those games, but I had played other versions of these games on Atari and NES and felt like I could maybe get my name on the high score list, with a little luck. With larger groups, we tried to take over the six-person X-Men cabinet, with my friends and I each playing as a different character. I gravitated towards Colossus, but was happy to play as Wolverine, too. Almost every visit, I would spend some of my quarters trying to earn enough tickets to cash in for one of the major prizes, like a new console game or a huge stuffed animal. Without fail, however, I would only ever accumulate enough to pocket a pencil, an eraser, or maybe a cheap foam plane that would break after a couple of throws.

Whenever I would travel with my family—and we went to places like Hawaii, Disneyland, and even Disneyworld during summer vacations—the first place I would seek out in the hotel would be the on-location arcade. It seemed like every hotel would have one, no matter the size. Even if it just meant a handful of cabinets and maybe a pinball machine or two, scoping out these adolescent oases was a genuine thrill for me. Nowadays, you’re lucky to find a hotel with any semblance of an arcade, and those that do have one usually only have the newest games where a quarter won’t even buy you a single credit. That said, there seems to be somewhat of a resurgence in arcades as entrepreneurs stake their claim by combining arcade cabinets with alcohol. There don’t seem to be many so-called “bar-cades” near me yet, but I am learning about spaces decked out with arcade games and pinball machines that you can rent by the hour, and best of all? No quarters required. The phrase “free play” never sounded so sweet.

Donkey Kong was one of the first arcade games I played, but things moved fast in the late ‘80s and early ‘90s. By that time, the great ape was already considered a classic, maybe even a relic, as more advanced games with flashier graphics arrived in arcades and homes around the world. While I may not be able to set any major high scores on that particular cabinet, hearing its memorable sounds and seeing those familiar purple girders and cascading brown barrels still fills me with joy. I’ll always miss the traditional coin-op arcade, even if modern incarnations give people the chance to relive their childhoods; you just can’t recapture perfectly the atmosphere and excitement of seeing a new cabinet or visiting an old friend. And to top it all off, though it only features a solitary ape, Donkey Kong is still more fun than a barrel full of monkeys. Just be sure to leap over or smash that barrel on the way down.

The hammer music is from Wrecking Crew. It's just so good that we think we hear it when we're playing Donkey Kong!

I would love to see Nintendo do a modern revisit to the original game. I loved DK94, which definitely deserves more love, but I'd love to see a return to the high scoring arcade nature of the original. The Pac-Man Championship games are great proof that old games like DK can see new life.

This isn't to say I think we necessarily need "DK 99", but some kind of modern take on the game would be a super cool homage to the original. (Come to think of it, DK 99 could work fairly well. Instead of 'jammer Pac-Men', you could send 'phantom barrels' to opponents to slow down their progress.