The Timelessness of Shovel Knight

An indie darling whose robust tale made a massive shovel-shaped imprint.

One of the most successful video game Kickstarters of all time, Shovel Knight pulled a shovel from a stone to become gaming royalty. Eventually spinning out into four total campaigns, the Shovel Knight Treasure Trove package contains dozens of hours of quality action platforming. But I want to focus on the original campaign, eventually titled Shovel of Hope, for it is here where the Shovel Knight legend begins and also where his blue armor shines brightest. This game represents a unique type of timelessness: it manages to look forward and back simultaneously. It’s hard to imagine the current bounty of independently-developed, nostalgia-fueled riches we have today without the efforts of the talented team at Yacht Club Games.

One of Shovel Knight’s greatest achievements is in how it makes what is old new again. Callbacks to Zelda II: The Adventure of Link, classic Mega Man, and even Capcom’s DuckTales culminate in a gaming experience for the ages, and for all ages. The level of polish and the way in which familiar game mechanics are implemented so skillfully makes it easy to enjoy every stage and boss fight in Shovel Knight. Even the overworld map calls to mind that of Super Mario Bros 3., and in many ways Shovel Knight lives up to—and even improves on—these NES staples.

The opening segments of the campaign introduce players to the titular character’s objective, rescuing his companion Shield Knight, and also teach them his initially small moveset. A standard jump, a shovel strike, and a pogo-stick-like drop: these are the maneuvers you need to master to progress, but they aren’t the only tricks up this armored sleeve. A host of other abilities are unlocked in stages or in towns that give Shovel Knight new ways to defeat enemies, conquer bosses, and avoid danger. By the end of the game, your capabilities are much greater, and this contributes to the excellent sense of progression.

Another clear marker of that progression, and one tied to improving Shovel Knight’s strength and arsenal is treasure, which takes the form of different colored gemstones you collect during each stage or a lump sum score awarded upon defeating a boss or mini-boss. The fact that treasure has a very practical use—buying new skills, health upgrades, and magic upgrades—cleverly incentivizes exploration. Extra areas outside of the main stages can be conquered to earn more treasure as well. Tied to this is the absence of a lives system; when you fall into a pit or see your health meter fully depleted, you merely lose a fraction of your total treasure, a mechanic that Super Mario Odyssey would emulate in a way. As well, much like in a Dark Souls game you can retrieve that portion by returning to the spot where you perished and collecting floating bags of treasure. A simple twist, perhaps, but how treasure functions in Shovel Knight is another of its major triumphs. 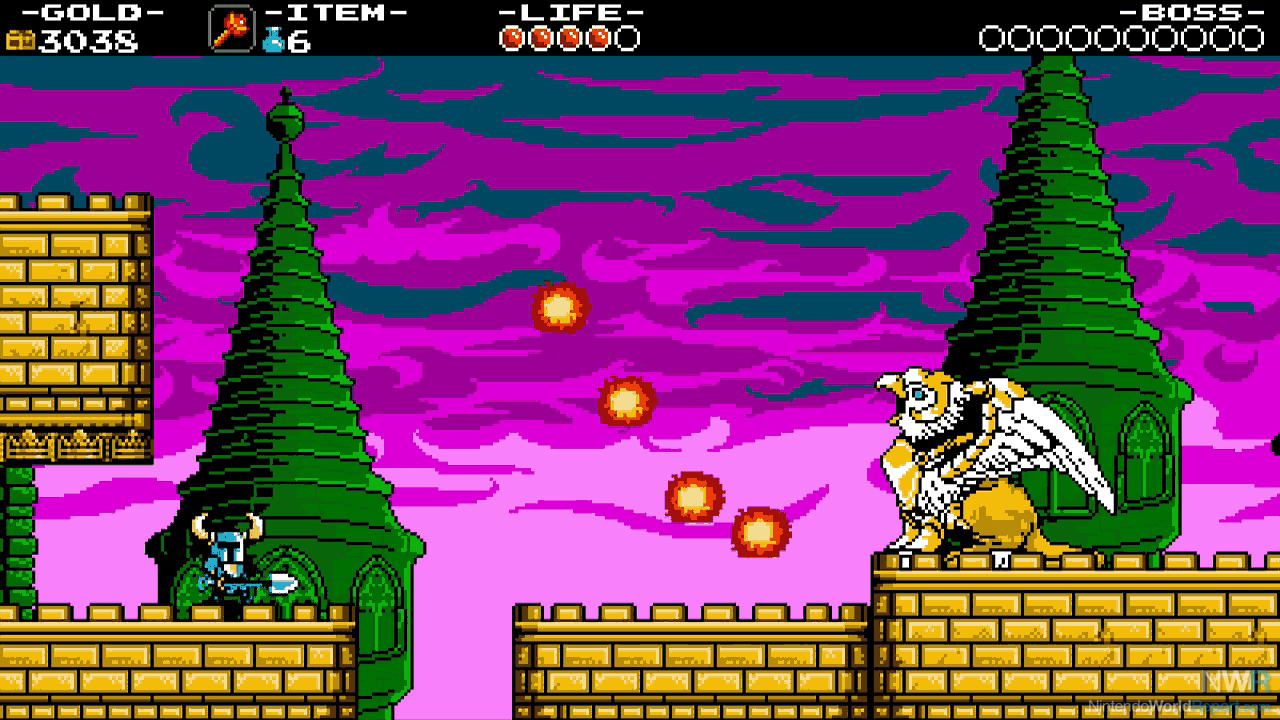 The world is astoundingly vibrant both in terms of visuals and its citizenry. The bosses of the game, the wonderfully-named Order of No Quarter, are a collection of knights each with their own theme and persona. From the boastful King Knight and the maniacal Plague Knight to the snow shovel-wielding Polar Knight, the variety and uniqueness of the end stage bosses adds greatly to the charm of the game. Not to mention how every themed stage is significantly different from the one before it, which wouldn’t be unfamiliar to anyone who has played a Mega Man game. The two villages are filled with people both helpful and purposefully humorous, and many of them stroll on by just as they did with Link in the towns of his second NES outing. There are also challenge areas with more treasure, more items, and more secrets. Every nook and cranny of the Shovel of Hope campaign contains at the very least a touch of magic, and often much more than that.

Jake Kaufman’s soundtrack remains delightful and full of upbeat and catchy music that is entirely infectious. My personal favorites come from Plague Knight’s stage (“Flowers of Antimony”) and King Knight’s stage (“In the Halls of the Usurper”)—the former actually composed by Manami Matsumae of Mega Man fame—but top to bottom the sound effects and music tracks are as memorable as the gameplay and characters. It’s obvious that a huge amount of love and care went into Shovel Knight’s presentation, as much so as its other facets. 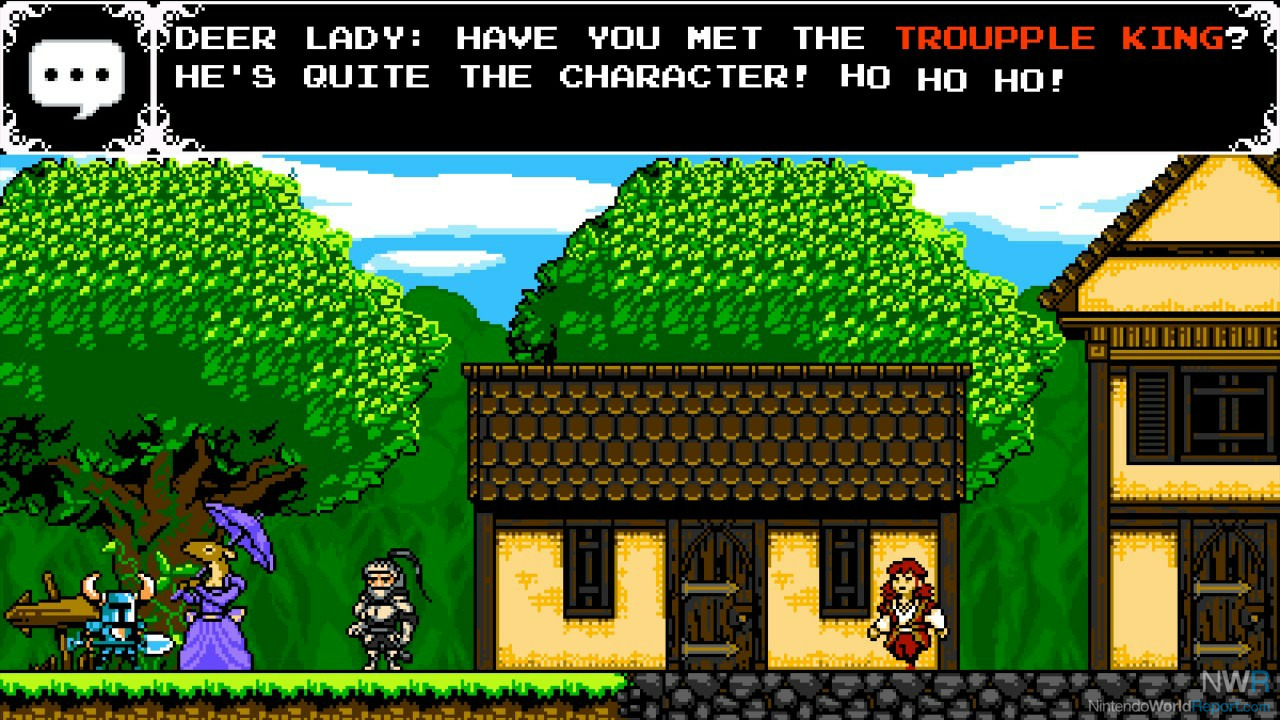 Prior to the launch of Shovel Knight in June of 2014, I really hadn’t downloaded or played many indie games. I was very much into picking up retro games on the Nintendo Wii, 3DS, and Wii U Virtual Consoles, but other than that I almost exclusively went for boxed retail games. Even today, I still cling to the permanence (and trade/resale value) of physical video games, but starting with Shovel Knight, I began to much more closely follow the indie scene and pay attention to what smaller development teams were bringing to my favourite consoles and even PC. Normally, I might have waited to see if titles like Gone Home and FTL: Faster Than Light would be released on consoles, but after Shovel Knight I sought out these critically acclaimed experiences on my computer; I didn’t want to be missing out any longer. In 2016, I would be enamored with Darkest Dungeon and its punishing difficulty, and these are just a few examples among many. Today, I actively seek out those games made by smaller teams with smaller budgets; some of my most memorable gaming moments have come from Toby Fox’s Undertale and Maddy Thorson’s Celeste. The work of a one-person team excites me just as much as the project of a 300-person studio, and I doubt I would be able to say that if not for a shovel of love hitting me smack in the face almost a decade earlier.

If it sounds like I’ve just been name dropping dozens of other games while describing the timelessness of Shovel Knight, it’s for good reason: Shovel of Hope carries with it the sensibilities and strengths of the past while carving out a path for other indies to find their own success. In a way, Shovel Knight exists in this perfect middle ground between nostalgia and progress. You can recognize the games that came before in the enemy and world design, but the gameplay feels modern and the presentation underscores just how far we’ve come since the days of Nintendo’s original 8-bit box. The full collection of Shovel Knight games, the Treasure Trove, is worth its weight in gold, but the most important quality of the three campaigns that resulted from Kickstarter stretch goals is that they highlight just how masterfully Shovel of Hope modernizes the pinnacle of mid to late-80’s platformers. I have no problem calling a spade a spade, and this is one garden tool that is basically rust-proof.