Pokémon Sun and Moon Finally Changes Up The Formula

By refining and redefining what makes a Pokémon game, Game Freak seems to have made a truly fresh entry in the series.

For 20 years, the main Pokémon games all followed a very familiar structure. Start in a quiet town, pick a starter Pokémon, and then travel the world to defeat all eight gym leaders and the Elite Four. That tried-and-true structure certainly produced some absolutely fantastic games, but after six generations and numerous games, it grew weary. The lapsed Pokémon fans I know all seem to cite the repetition of the games as a reason for why they went away. They all follow similar beats and rhythms.

After spending many hours with the newest generation, I can say Pokémon Sun and Moon is the first generation to succeed in challenging that design, and it does it not by throwing out the baby with the bathwater, but by subtly reshaping what a mainline Pokémon game can be. A lot of tropes are still present in the Alola region: you still start in a quiet town and pick one of three starter Pokémon. You still travel the world with the stated quest of catching ’em all. But the gyms are gone. The Elite Four are gone. Instead, you go between four different islands on a quest to complete Trials and defeat Island Kahunas. It’s not a gargantuan shift, but it’s enough of a new take to feel wildly fresh.

The Trials are each focused on a specific type of Pokémon and challenge you to complete some sort of puzzle - sometimes as simple as “find the exit” and sometimes as goofy as “watch these Marowak dance” - that ends up with a fight against a Totem Pokémon. The Totems are essentially boss Pokémon and are most often evolved forms of the brand creatures. They’re often hard as hell and offer up the spectacle of a boss battle better than any Pokémon game I’ve ever played. The end-of-island Kahunas are the closest this game has to Gym Leaders, but they’re used as more of an island finale than anything else. Each Trial and Kahuna also gives you a concrete beneficial item in the Z-Crystals, which allow you to super-charge a specific move type once per battle. And each Z-Crystal has a specific in-game dance associated with it because sure, why not. 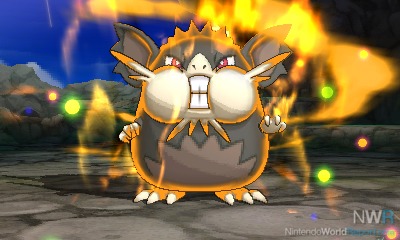 While the first trip through each of the four Alolan islands is extremely linear, marked by an ever-present flag marker on your map telling you where to go next, it’s not really any more or less linear than past games. Sun and Moon just doesn’t hide its straightforwardness. That weirdly pleasant lack of subtlety is symbolic of the numerous quality-of-changes present here. No longer do you need a HM slave; instead, you slowly gain access to Ride Pokémon that can be called and ridden when needed. After you face a Pokémon for the first time, you’ll have an easy-to-see reminder of what moves are and aren’t effective against it. If you’ve missed out on recent games, that’s just the tip of the iceberg of all the game and UI improvements that have been made to make it all easier and friendlier.

I’ve been incredibly impressed with Pokémon Sun and Moon, mostly because after years of the world wishing for it, the team at Game Freak actually is making changes to the way these games flow. It’s a changeup that might not have been totally needed (if sales are the metric to go by), but it’s one I appreciate wholeheartedly because it makes for a Pokémon game that feels new in a way that none of the entries in the past decade or so have felt.

I feel that this shift in direction came from the fact that neither Tajiri nor Masuda were in the director's seat and that Ohmori-san were by and large responsible for the direction it took. we got glimpses of the more cinematic approach thanks to his directoral role in ORAS and the Z Episode in particular, but his vision to effect to flow of pokemon couldn't be seen until now that he isn't adhering to remaking a game. I'm not ready to praise it in such a way until I get my hands on it. I'm still very much in the Black/White camp as far as favorite generation, and I will need a long time after launch to determine if that will remain the case.