Honestly? We can probably just say this is all Francis the Chameleon’s fault.

At E3 2016, Nintendo showed off Paper Mario: Color Splash, due out on October 7 on Wii U. The Treehouse Live demo confirmed what most figured: this wasn’t a secret sequel to Thousand-Year Door’s RPG stylings. Instead, it’s a card-based follow-up to Paper Mario: Sticker Star. When Color Splash hits later this year, the non-RPG Paper Mario games will outnumber the RPG ones.

Both the Paper Mario and the Mario & Luigi series are stuck between a rock and a hard place. On one hand, the Mario & Luigi series is in a rut in which each successive RPG seems to disappoint large swaths of the audience despite retaining the same general flow and experience. With each entry, there’s a feeling of "oh this again?" even if the games are still ultimately enjoyable and fun. 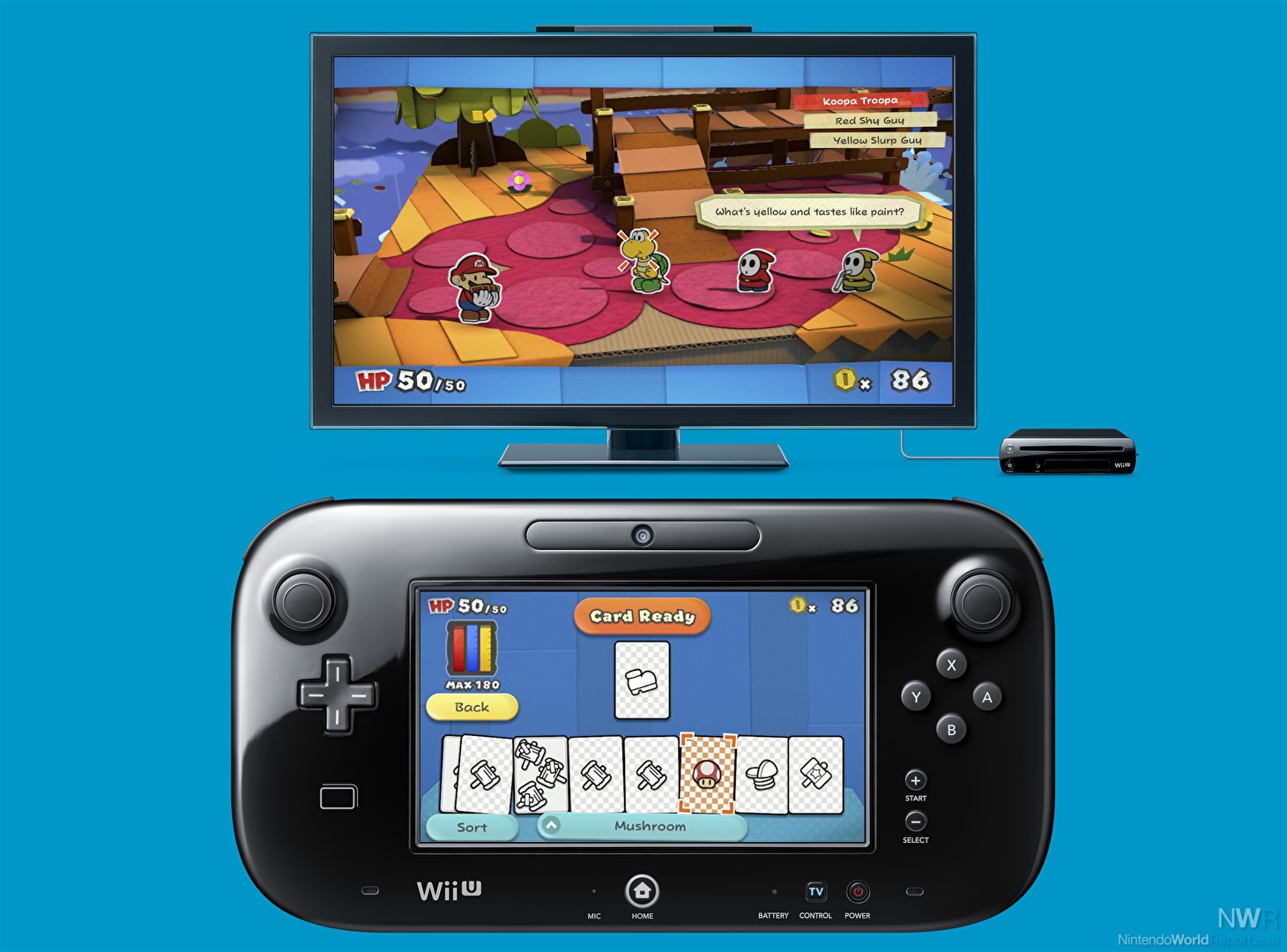 On the other hand, the Paper Mario series didn't sit still. After a pair of by-the-book RPGs on the Nintendo 64 and GameCube, the series took a left turn with the platforming/RPG fusion of Super Paper Mario. After that, Sticker Star on the 3DS altered the formula so much that "RPG" isn’t really an applicable genre any more. It’s far more of an adventure game that just happens to have turn-based battles sometimes, and that seems to disappoint large swaths of the audience.

Most concerns about each series could be flipped around to be facts about the other. "I wish Paper Mario would just be an RPG!" Mario & Luigi has been an RPG for five entries over 15 years. "I wish Mario & Luigi would evolve more and change it up!" Paper Mario consistently went in crazy new directions in the past decade.

Hearing Nintendo Producer Risa Tabata explain why Paper Mario is no longer a traditional RPG because Mario & Luigi occupies that space makes sense, even if it’s somewhat disheartening to hear. It also lines up with what Nintendo’s Kensuke Tanabe said in an Iwata Asks around Sticker Star’s launch: "With regard to the story, we did a survey over the Super Paper Mario game in Club Nintendo, and not even 1% said the story was interesting." 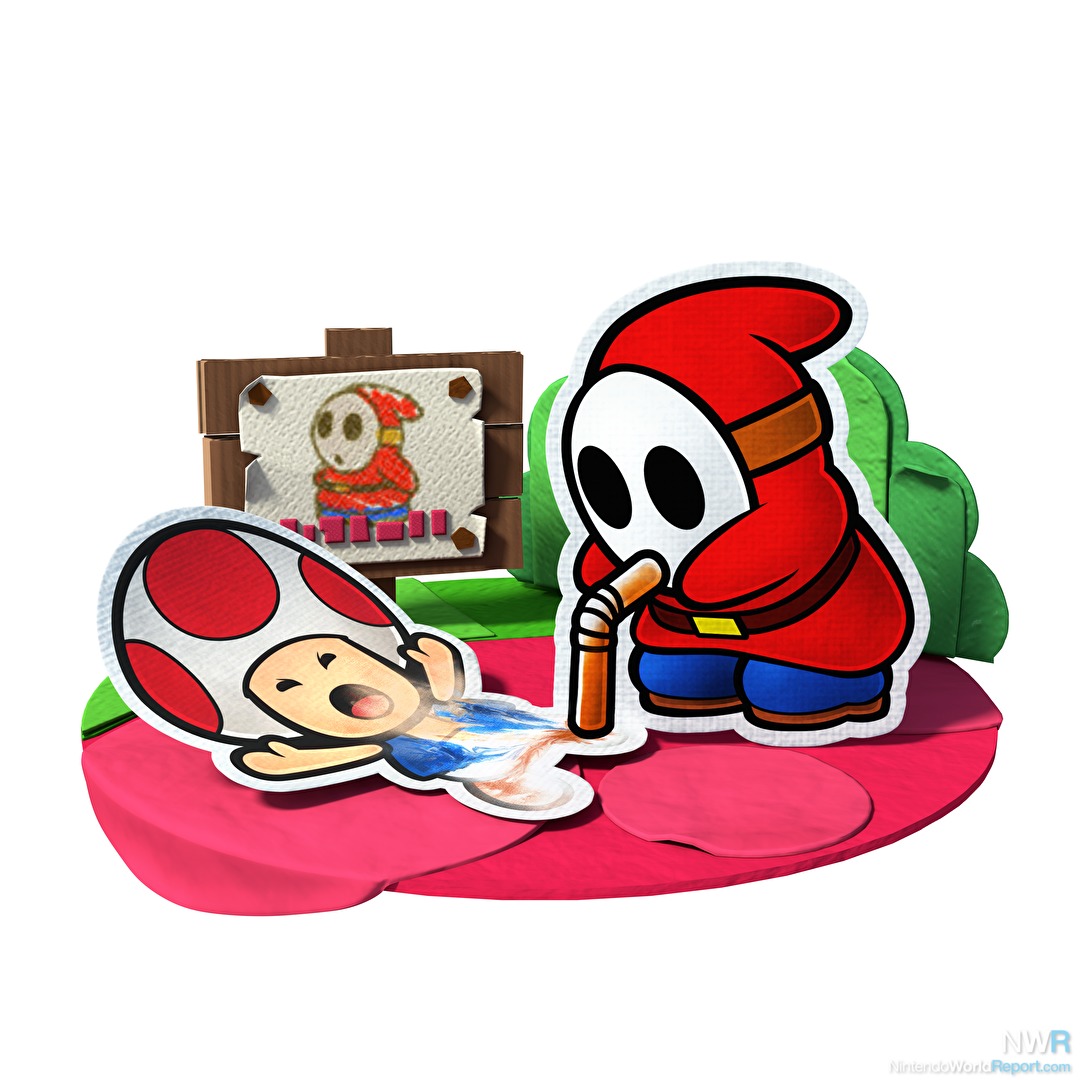 If you got feedback like that, wouldn’t you excise the story from a series? Shigeru Miyamoto gets flack for Sticker Star, as apparently it was his directive and recommendation to remove the story, but following the response to Super Paper Mario, which was oft lambasted for being way too wordy, wouldn’t trimming the fat make sense?

In the case of the Paper Mario series, Nintendo and developer Intelligent Systems seemed to directly listen to fans, taking Club Nintendo survey responses to heart. Sticker Star might not have been for everyone, but it was the result of feedback and the desire to keep a series interesting. Maybe Color Splash will fine-tune that concept. Maybe it will be more of the same? We’ll find out for sure soon enough. 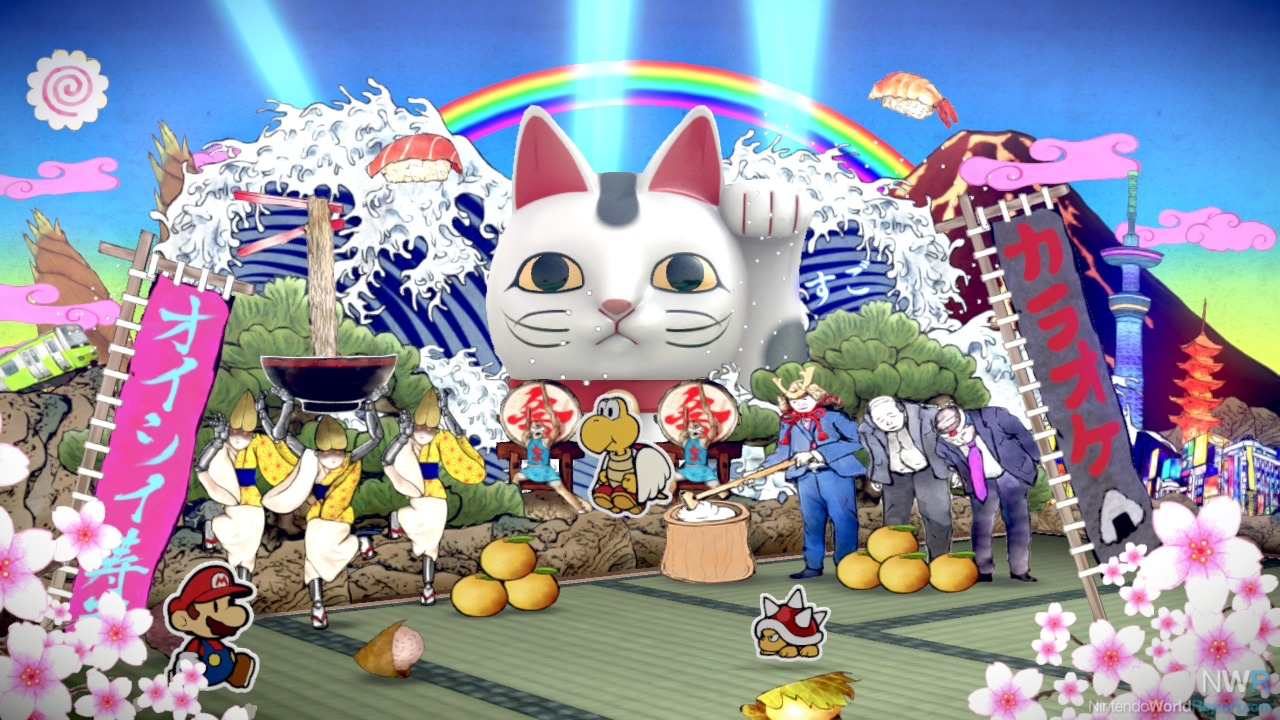 And that’s where we’re at with Paper Mario - the fat has been trimmed but in the process, a lot of the vim and vigor of the earlier games has been replaced by Toads, hide and seek, and acid-tripping fire extinguishers. Whether that makes it a better game or not is all personal preference, but we’re certainly far, far away from the days of the Rogueport, the Glitz Pit, and the X-Nauts.

Hey Neal, I think you mentioned this on one of the News Reports that with Mario & Luigi being the "canon" RPG series that Paper Mario could probably take on a more adventure game route. (Please correct me if I'm wrong).


I would actually be for this. I think defining the Paper Mario series as a pure adventure game IP from now on could actually help both series out. With Nintendo unifying its development teams I doubt both series need to exist as RPGs anymore. I know that's not what some people want to hear but I think it probably makes the most business sense. If Nintendo draws a line on the sand and says "this is what both series are from now on" I think we can move forward without most of the contentious back and forth.

"With regard to the story, we did a survey over the Super Paper Mario game in Club Nintendo, and not even 1% said the story was interesting"

And here is a classic example of a clueless company missing the point.  Super Paper Mario's writing is terrible so OF COURSE only 1% said it was interesting.  What if this same survey had been asked for the prior Paper Marios?  The reaction to the story would probably have been better.  Shouldn't a survey that will indicate the future direction of a series get feedback on the entire series and not just the most recent game which coincidently was widely regarded as the weakest entry in the series at that point?  What if Nintendo based decisions about Metroid on Other M and Federation Force?  They would just cancel the series outright!  My expectation is that Color Splash will sell worse than expected due to being a Wii U title and disgruntled fans that bought Sticker Star because of the Paper Mario name not buying another game that follows the same template.  A weak sequel can still sell well because of the name value of the series.  It's the follow-up to the weak sequel where you see the sales affected.

And I remember a time when "this was Mr. Miyamoto's idea" was mentioned on subtle awesome details that made great games better.  Now it seems like if Miyamoto is "credited" with the idea it's usually the stupid terrible idea that ruins the game.  My opinion of the guy has completely flip-flopped since the Wii.

I actually really enjoyed Super Paper Mario. I guess I was the 1%?

Color Splash will be the first mainline Paper Mario (ie, not counting Paper Jam) that I won't play. I felt that Sticker Star was inane to the point of being a bother to finish - the entire battle system was terrible. If Color Splash is more of the same, which it looks like it will be, you can count me very, very out.

I'm still (maybe foolishly) keeping my hopes up that Geno (sorta) and Cloud being in SSB means that there's still a chance for a real Super Mario RPG 2. Give me that, and I don't care what you do with Paper Mario.

Good article.  Darth, I also enjoyed Super Paper Mario!  The concept was creative and the writing was fun.  Not a masterpiece, but I have good memories of playing it.

Cutting the story out of Paper Mario games would be a shame, since they are very story driven to the point of being interactive novels at some point.  But, it really is silly to have two RPG series.  If they totally rethought the Paper Mario series as adventure games with interactive items and paper-based puzzles, it could solve that issue.

One thing that bothers me with Paper Mario games is that almost nothing looks like paper.  It just looks like basic textured polygons.  Nintendo has made some games that do complex fabrics well and the simple nature of the paper figures means that they could be photo-realistic.  At this point, the style feels half-hearted.

The idea of having one Mario RPG series makes sense. I don't know if Mario & Luigi should be that series though. The two Paper Mario games that were RPGs were loved. The two that weren't RPGs were met with a lukewarm reception (though, as this thread shows, Super Paper Mario does have its fans). People are growing tired of the repetitiveness of Mario & Luigi, so why not making a bigger change with that series and turn the next installment of those games into an adventure game? This seems like a case of Nintendo actually taking feedback into account and, unfortunately, misapplying it. It wouldn't hurt to just give both of these series a little time off either. That line they like to trot out about how they're not going to make a new 2D Metroid of F-Zero game until they have a cool new idea for those franchises should have been applied to these Mario spin-offs already. Of course it's a lot easier to say such things about franchises that aren't selling great, but it looks like Mario & Luigi and Paper Mario might join that category soon enough, which sucks.

All that said, I'm going to keep an open mind about Color Splash. The visuals look great and maybe they tweak the formula enough to make the gameplay solid as well. Also, I'm glad to see more editorial content on NWR. The E3 and news coverage has been stellar and hopefully it gives the staff more ideas for stuff like this.

My only problem with Sticker Star was that it was just about impossible to play without a guide. Not only did you need to know which stickers to bring with you to a boss fight, you often had to know exactly when to use them during the fight. If you didn't have the necessary stickers with you, or used them at the wrong time, you were just out of luck. I finally resorted to just using an FAQ for the last part of the game. I never would have figured out the sequence for the final boss without it. If Color Splash has the same issue, I won't bother. If that has been corrected I'm eager to try it.

My only problem with Sticker Star was that it was just about impossible to play without a guide. Not only did you need to know which stickers to bring with you to a boss fight, you often had to know exactly when to use them during the fight. If you didn't have the necessary stickers with you, or used them at the wrong time, you were just out of luck. I finally resorted to just using an FAQ for the last part of the game. I never would have figured out the sequence for the final boss without it. If Color Splash has the same issue, I won't bother. If that has been corrected I'm eager to try it.

I'll probably get Color Splash no matter what, but I'll agree that the sticker system could use some cleanup. The "Thing" stickers are one of the coolest aspects of the game, but there weren't enough hints to suggest which ones might work where in battle most of the time.