As the frothing demand for a Direct increases, it’s reasonable to expect that the next Direct will break viewership records. Looking at the history of Nintendo Directs on YouTube, some patterns begin to emerge about what brings eyeballs to the videos and what doesn’t.

For this discussion, we are considering views for the archive versions of the North American version of the Direct, which covers Nintendo’s largest market. We have included digital events produced entirely by Nintendo (2013 – 2015), however the 2015 Digital Event was excluded from the data as Nintendo reuploaded the 2015 video, resetting its view count. (It had approximately 59,000 views between its reupload date of September 15 and midday October 29.) Direct Minis and the June Direct Micro were checked, although the former appears to have been depricated sometime in 2013.

A full spreadsheet can be found here. 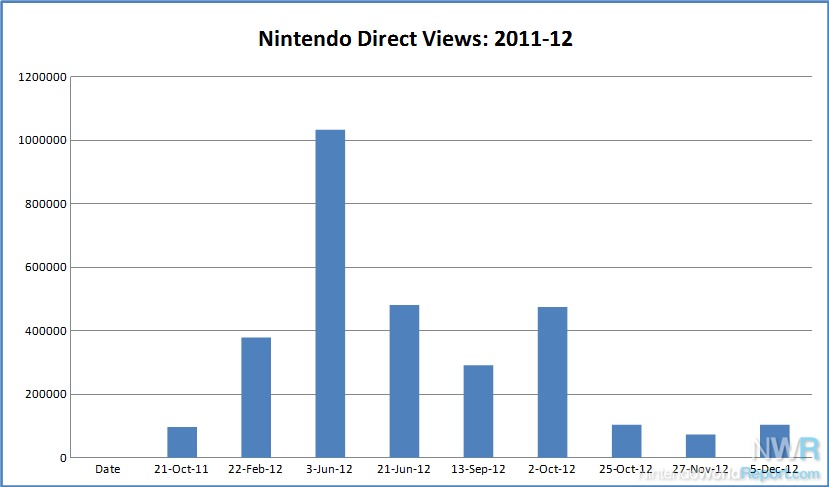 The first year and change of Directs don’t have a whole lot of views – the non-E3 high point was the June Direct, which featured the announcement of the 3DS XL. Surprisingly, the runner-up is the video that featured the announcement of Xenoblade and The Last Story being released in North America, which may have convinced Nintendo of America to focus on less mainstream fare for consoles in Directs. 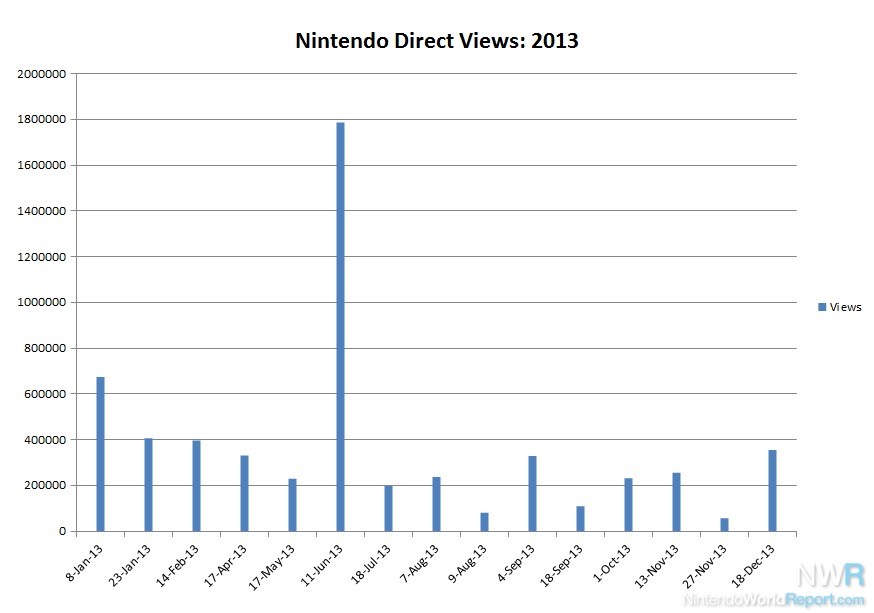 2013’s high came early in the year, as the Pokémon Direct has nearly 700,000 views for the announcement of Pokémon X and Y and the Wii U Direct (which revealed games that are still not out close to three years later) is over 400,000. The E3 Direct has nearly half a million more views than 2014’s, but that may have been due to the archive replacing the stream that was plagued by technical difficulties that year. Results were mixed on game-specific Directs, as although Pokémon led the year, The Wonderful 101 Direct is, to this date, the lowest viewed Direct that didn’t get reuploaded or involve museums. 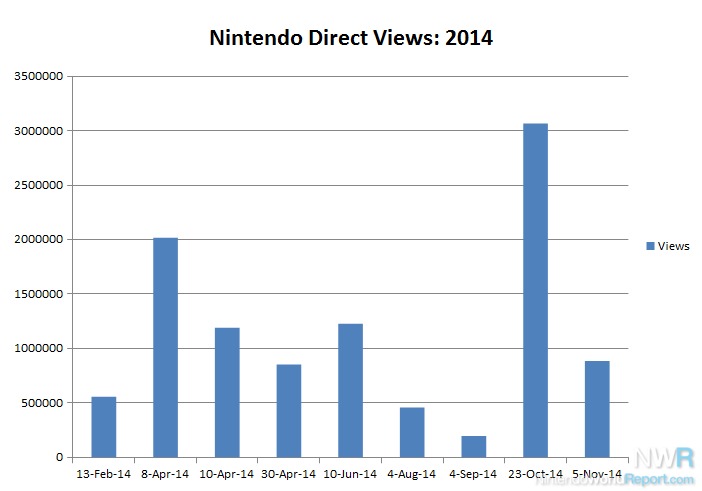 There isn’t a lot of data for general Directs in 2014, as there were only two + the Digital Event, though they both cleared 500,000 views. The November Direct was over 800,000, marking the start of an increase that carried into 2015. However, Satoru Iwata’s hiatus led Nintendo to bring in a lot of game-specific Directs, and Smash Bros proved to be the biggest draw with the two Smash-focused Directs (April and the 50-Fact Extravaganza in October) doing over 2 million views. The Tomodachi Life Direct two days after the Smash one is also over a million, however the brisk length of the video and sheer insanity of it may have caused it to go viral in other ways. Mario Kart 8 was predictably strong at over 800,000 views, and Hyrule Warriors did quite well considering the game at over 400,000 views. Sadly, the Bayonetta 2 Direct hasn’t cleared 200,000 views leaving poor Platinum Games the biggest ratings killers this side of Sheamus. 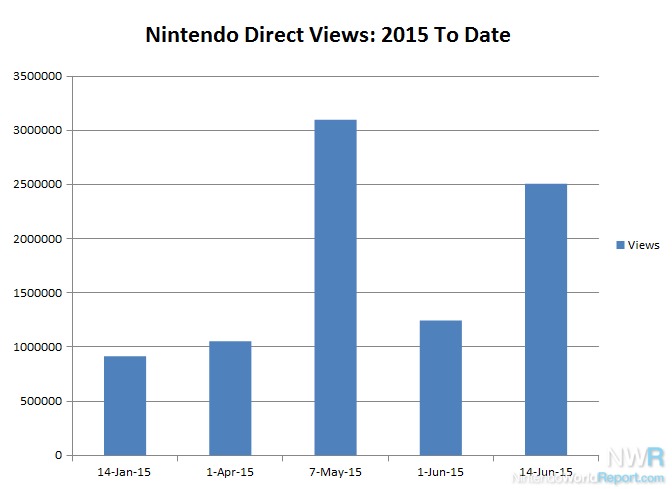 This year’s Directs have all grown viewers – the January Direct that featured the New 3DS’s Western debut is the only one to not crack a million. However, the key this year appears to be Directs for big games, as May’s Splatoon Direct is the highest-viewed NA Direct on YouTube (3.09 million) and the pre-E3 announcement of Smash Bros’s second DLC wave is over 2.5 million.

The new form of Direct should take into account that big games – especially console ones in North America – are the biggest drivers of the Direct format. The next one will be an outlier in its viewership simply because of the lack of a Direct or Direct-like event in at least five months. To that end, it may be good to slow down on the number of general Direct videos each year.

At their peak in 2013, there were nine multi-game Direct presentations including E3, which led to situations where the big announcements were a Wii U plaza upgrade and the localization of Professor Layton v Phoenix Wright Ace Attorney (August 2013). That’s a bit too much if you want to make them special. A general direct say, every quarter to set up the release dates for the next few months would be ideal, perhaps on a late March or early April (Q2) – June (E3) – August (set up the holidays, replace the giant release date dump) – December (Q1) schedule. The gaps can be filled in with game specific Directs for major games – pretty much every major Wii U game next year bar Star Fox Zero could stand one, because Platinum is ratings poison apparently. Those who want more details about say, Zelda Wii U can get it all at once, and the ones waiting for a port to the next console 18 months later Last of Us-style can hold out.

By building up anticipation for a general Direct, you create a lot of hype and a lot of attention for when the event happens. You don’t want to wait too long however, or you end up in a situation where you’re saying prayers for the employee who has to read @NintendoAmerica’s replies every time they breathe. The key is to find the right balance, and if Nintendo does that, the Direct format will survive the transition away from its founder.

I feel like 8 Directs per year is the ideal number.  Four big quarterly shows, and four smaller Directs to fill in the gaps.

I remember a time where it seemed like Nintendo had E3 and Spaceworld and then there wasn't a peep out of them for months at a time.  That sucked and the Directs are a great way to keep Nintendo in the news.  But I feel they preach to the choir so Nintendo should make sure to have a full presence at industry-wide shows like E3.  The goal should be to get the word out there and that means to everyone, not just Nintendo die-hards.