Nintendo World Championships 2015: Nothing But Luck 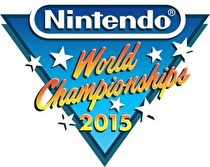 When Nintendo revealed their E3 plans, most of us were very excited to hear that they were brining back their legendary Nintendo World Championships. This old competition has become so well known over the years due to it having a special, and extremely rare, set of competition cartridges that ran on the NES. Now, 25 years later, Nintendo is looking to recapture the magic that surrounded this epic tournament. But does winning the Nintendo World Championships 2015 come down to nothing but luck?

To start off, if you wish to participate in this year’s Nintendo World Championships, you have to be lucky enough to live near a participating Best Buy store. How lucky? Well, only eight stores in the entire country are running tournament qualifiers. Don’t live close enough? Too bad.

So, you got lucky enough and can attend one of these qualifying rounds. Now you have to be one of the first 750 people to get there in order to compete. Normally, this would sound like a lot, but since there are only eight locations to participate at, you can count on lines and some degree of insanity.

Now you’ve made it to one of these locations and guaranteed yourself a spot. What’s next? You’ll have to compete in the Nintendo World Championships Remix that was originally featured in NES Remix 2 on Wii U. However, you won’t be playing it on Wii U, you’ll be playing the ported version on the Nintendo 3DS. Why? No one knows. You’d think players would prefer to have a full Game Pad to play this on, and spectators would likely want to see the action too. Instead, the qualifying round is taking place on portable devices provided by Nintendo. I wonder how greasy these units will be for the 750th competitor at each location. 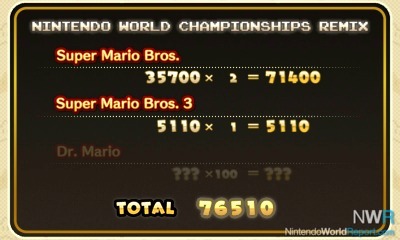 Without hearing the score breakdown you would probably think it’s a more even scoring system. But if you look at the breakdown, you will see that the scoring is heavily tilted in favor of the Dr. Mario section. So, the goal is to get to that part of the run as quickly as possible. Basically, there is an optimal and somewhat easy to learn way to get through both Super Mario Bros. portions of the competition. Players will probably use a similar tactic to get through both giving them the most time to play Dr. Mario. This boils down the entire competition down to a Dr. Mario tournament.

The fact that everyone is playing Dr. Mario is where the next stage of luck comes in. Not only are pills being thrown into the play area randomly, but the stages themselves generate randomly. This means competitors could be dealt a bad hand at competition that leaves them with a lower scoring potential. Yes, there is no denying that playing Dr. Mario well takes skill, but it’s these two random elements that really make the competition a complete crapshoot.

I know some people will tell me there was randomness in the original Nintendo World Championships competition cartridge as well with Tetris. While that is true, the players only had to worry about the shapes of the falling blocks. Not the random set up of the stage.

So if you are lucky enough to have everything align for you during this qualifying round of the Nintendo World Championships, one person from each location will be sent to the finals in Los Angeles. That’s a mere eight players. Five years ago at the Wii Games Summer 2010 Nintendo sent around 200 finalists to the same city to compete in the finals of a competition that was barely even promoted (trust me, I was one of the finalists). Why can’t they ramp this up a bit more? 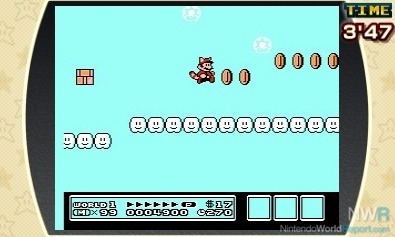 While only eight players who qualify in the preliminary round will have to win a spot in the finals, eight more competitors hand-picked by Nintendo will get to compete as well. So that means half of the contestants won’t have had to earn their spot in this competition at all. Maybe they are worthy, but at this point we don’t have any further details. It just seems a little unfair.

One more thing I’d like to say is that it’s shocking that the Nintendo World Championships 2015 are using only NES games for competition. The NES came out in the United States 30 years ago, and these are the only Nintendo titles that are being used for competition? Yes, I know we don’t know what games or rules will be in the finals, but in this preliminary round, it seems just a little silly to only use these old, albeit classic, games. Shouldn’t it be more of an iron man of Nintendo deal featuring games across several systems? The fact that they are using the mode originally jammed into NES Remix 2 just makes this entire thing feel a bit rushed. (Editor’s Note: There’s always a chance the final round in Los Angeles will feature a broader scope of games)

In closing, I’d just like to wish anyone trying to compete in the Nintendo World Championships 2015 the best of luck. If you want to earn a spot in the finals, you are definitely going to need it.

Sounds more like entitled gamers who have never had to work to accomplish anything noteworthy based uon actual skill and dedication within the medium getting upset by the prospect of not being able to enter something exclusive, if you ask me.

One could argue writing articles on Nintendo-related material means one has contributed something of note. That proves nothing of dedication and expertise in the medium itself. I should know, I've written around 200 articles in the past four years and received nothing of note from it, all because I'm not a member of specific sites' group of friends and because I don't exhibit the popular opinion on a variety of subjects. Doesn't mean I can, or can't beat someone hard in the NES World Championship Mode on NES Remix.

Perhaps we should treat a thing that is a silly lark, a PR stunt, and nostalgic pandering as such, rather than a super-serious competitive event and marketing platform.


I can imagine that Nintendo of America has booked the Kodak Theater (or whatever it's called now) for several years and has to use it for something.


Lets all relax and have a little fun!

This article is silly.


1) Yes the locations are limited...but 8 locations isn't a high number, but it will provide plenty of opportunity.


2) If you have 750 players at a Best Buy, the best way to quickly get all players to compete is through the 3DS and not the Wii U.  You could easily have 50+ 3DS devices to help speed up the competition.


3) So the 3 games have varying point scales?  And there are ways to exploit the system so that you can get to the highest scoring one faster...that sounds somewhat skill based...not just luck.


4) These are just qualifiers so I am sure the later portions of the contest may have more skill required.  But this happens in all qualifier like events.

There is zero reason Nintendo couldn't have done this online, so that everyone could have a chance to participate instead of saying only people near 8 specific cities can have a chance.

"You could easily have 50+ 3DS devices to help speed up the competition."

Doubt it, more hardware makes it harder to for the few Nintendo employees to keep an eye out for those that would taper with the machines.  The event goes by score so it really don't matter if you show up later in the day as long as you're in before the cutoff 750.  I doubt people are going be lining up for this one, other than free E3 tickets, Nintendo hasn't stated anything about flying/paying for hotels/or prizes yet.

Really don't know what to make out about the 50/50 split (namely the ones that EARNED the right to play at e3 vs the ones Nintendo selected themselves.  I'm guessing Nintendo's going with "celebrities"  like Reggie for example.  Or maybe through in a twist and have those 8 players paired with the 8 other winners for a celebrity tournament faceoff--man that would be epic--I would watch that just to see the actual gamers "eye" rolls when they are told.

Damn, I wish I can edit my shit.. :( It's freaking past the 20+ hour awake mark and my mind shut down many hours ago.

so, fun fact; I actually live really close to one of the participating Best Buys. my cousin lives 5 minutes drive from it, even, and he's the one who bought me my NES all those many years ago with his allowance money as a christmas gift.

unfortunatley, I'm going to be out of town in seattle for a convention. so by going to a location closer to NoA headquarters for a week, I am missing out on my chance to participate in a Nintendo sanctioned event.