Now that Nintendo's working with Universal, where could Mario, Link, and friends fit in Orlando?

Nintendo’s officially working on theme park rides and attractions with Universal Studios. My mind, much like many of your minds, is racing with possibilities and potential. An F-Zero roller coaster? An epic Zelda dark ride? A real-life Peach’s Castle? Some hapless dude dressed up as a Toad? Sign me up. After I let my mind run wild, though, I started to think: where the heck is Universal Studios going to fit Nintendo?

For those who don’t know, Universal Studios’ two major locations are in Orlando, Florida. Universal Studios Florida and Islands of Adventures are their primary venues (there are also locations in California, Japan, and Singapore). While there’s a chance Nintendo rides could debut in Japan or California before Florida, it seems like Universal’s most ambitious projects all start off in their Orlando parks. One of the problems with their Florida locations is that they don’t have a lot of room for expansion. Whenever they add new rides, they repurpose or dismantle old ones. When the Simpsons Ride was added in 2008, Back to the Future: The Ride was shut down. When the Wizard World of Harry Potter was added to Islands of Adventure in 2010, large chunks of the generic Lost Continent area were revamped to become Hogwarts and Hogsmeade. A roller coaster even got remodeled to be Potter-themed. When more Harry Potter areas were added to Universal Studios in 2014, the Jaws ride and the surrounding areas were shut down. I could list examples of this all day. The fact is, if a substantial Nintendo area is going to be added, something is going to have to be taken out.

So, where would this Nintendo Land go? 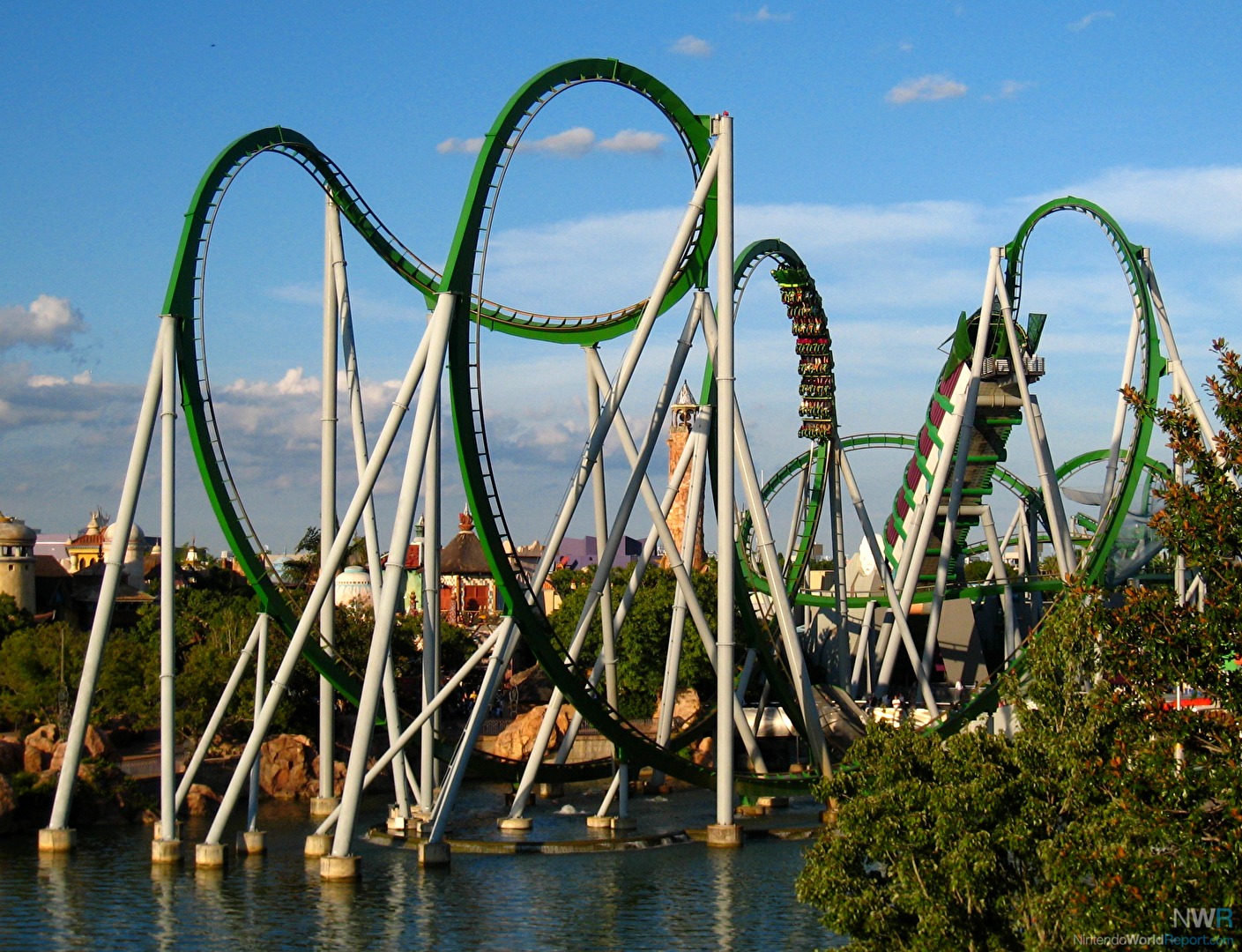 While it appears that Marvel’s contract with Universal lasts forever, the idea that Disney-owned Marvel characters are a major part of one of Disney World’s Florida competitor’s theme parks is likely something Disney wants to change. The only official word on this came from Disney CEO Bob Iger when he said that Disney was looking into how to incorporate Marvel characters into their theme parks. While some overseas Disney parks are adding Marvel characters and areas, Disney can’t legally have anything Marvel related in Disney World as long as Marvel characters are at Islands of Adventure. Considering Disney brokered a deal to bring Spider-Man (whose film rights are owned by Sony currently) into the Marvel Cinematic Universe, I suppose anything could happen. Maybe Universal and Disney are in the middle of figuring out some sort of plan to excise Marvel Super Hero Island from Islands of Adventure as we speak? Maybe Nintendo characters will soon overtake the area?

If that were to happen there would be several existing rides that could be remodeled for Nintendo themes. The showcase Amazing Adventures of Spider-Man ride, which is a 3D dark ride, could be redesigned as a Smash Bros.-themed ride that has hero characters fighting against villains in spectacular 3D. The Incredible Hulk roller coaster might be an ideal Zelda-themed ride as passengers would have to help Link defeat a dungeon by riding along (the stories on these rides are never that cohesive). That Hulk roller coaster could also be a Mario Kart ride, too. The Storm-themed teacups ride could be turned into a cute Animal Crossing ride, while the Doctor Doom freefall ride could be transformed into a Metroid ride (only for Nintendo to cancel it before the park opens). 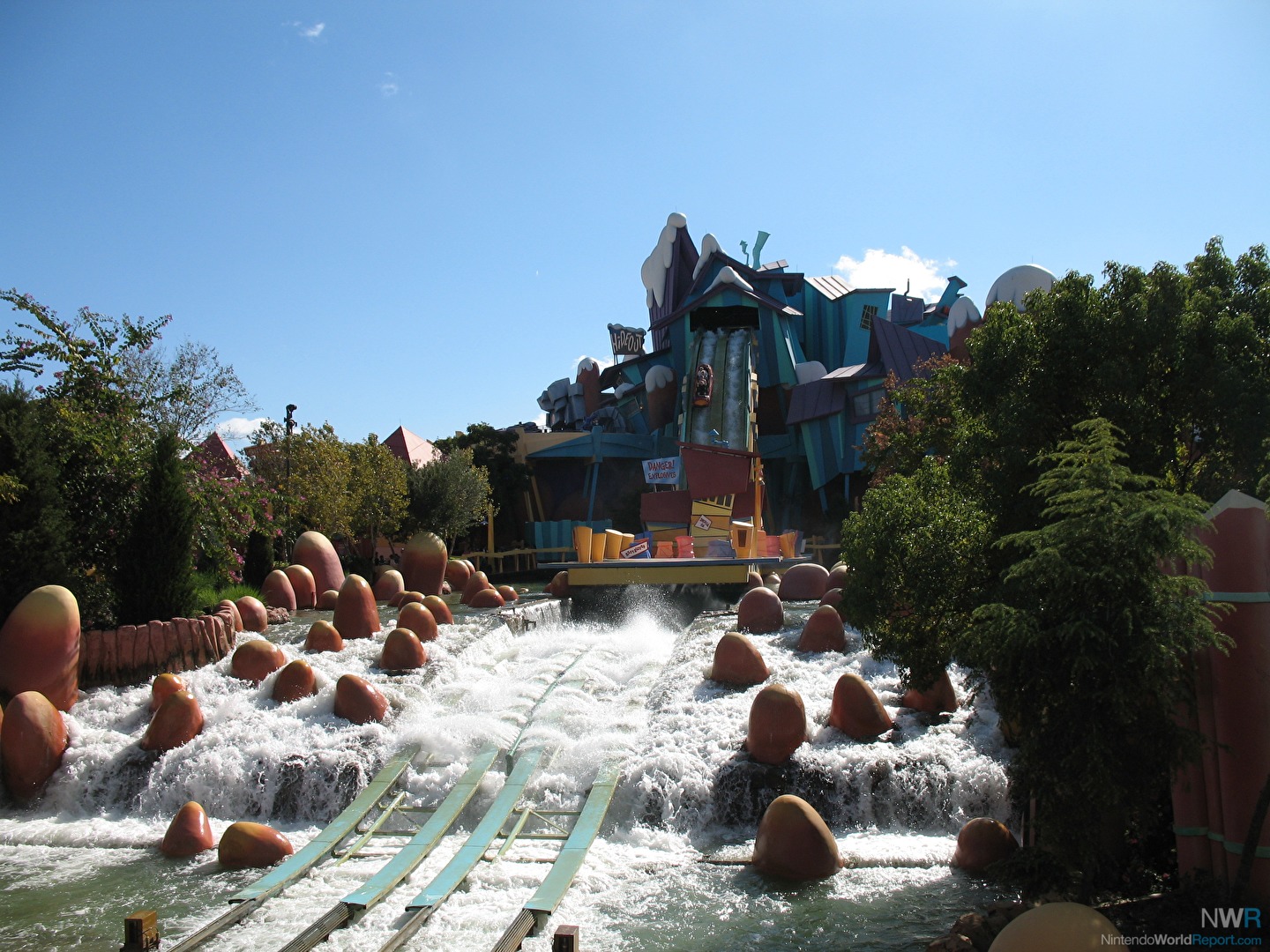 Next to Marvel Super Hero Island is Toon Lagoon, a water-focused area that is themed after characters ranging from Dudley Do-Right to Popeye. While it’d certainly be sad to see those old-school characters get the boot, this is one area of the park that hasn’t changed since it opened in 1999. Nintendo games feature a lot of water stages, so this area could get heavily revamped with Nintendo rides and still keep a similar idea. Imagine a Mario log flume with that creepy eel from Super Mario 64, or maybe a dark ride modeled after a Water Temple from Zelda. Actually, scratch that. This is a terrible idea. Water levels are the worst. 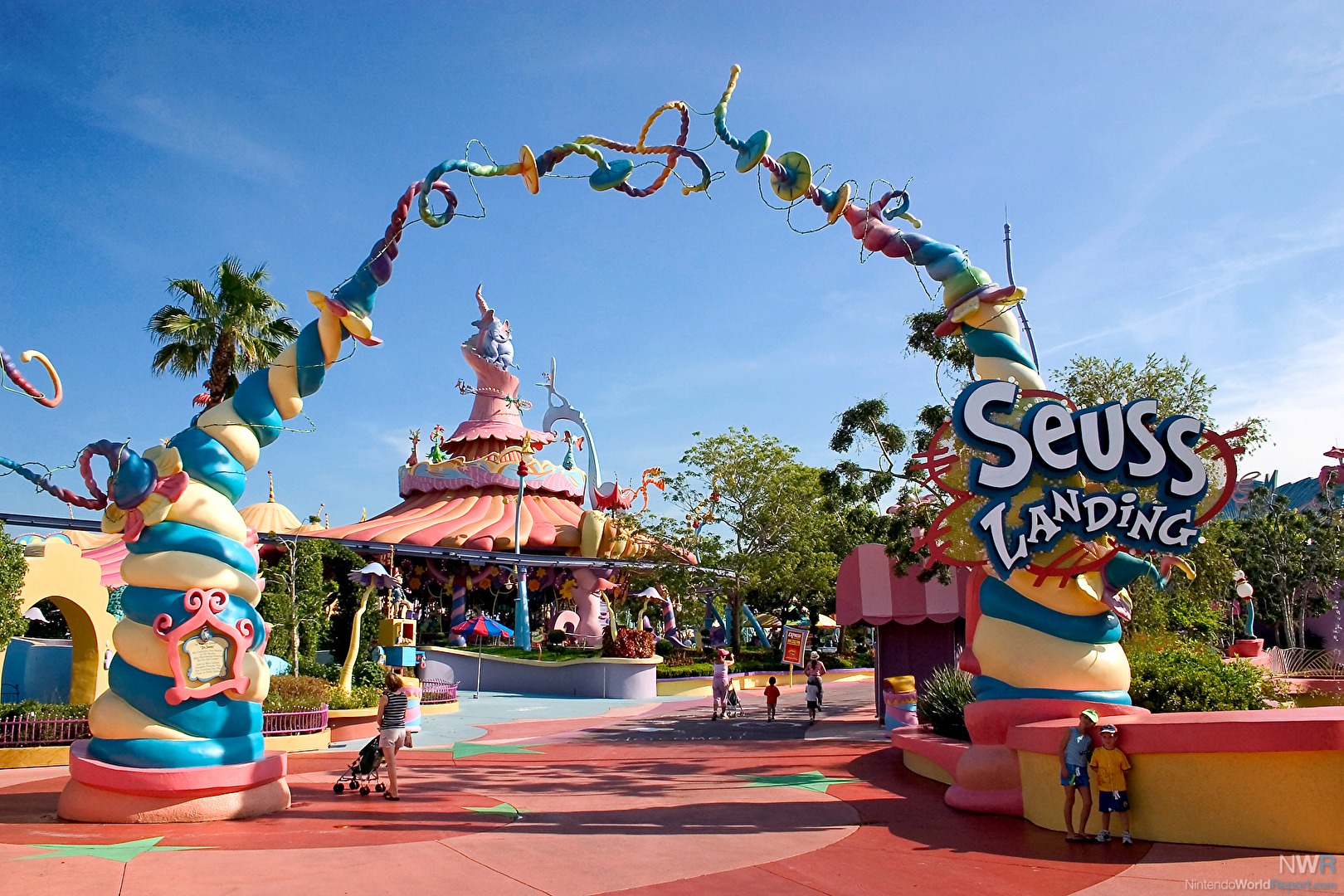 This could happen, but dammit, the Dr. Seuss area in Islands of Adventure is so charming and whimsical, I don’t want to even think of Nintendo taking it over. If Nintendo were to take over the Seuss area, though, it’d like be a wholesale renovation. The appeal of Seuss Landing is that it has a distinct visual design that emulates the author’s work, with only a few rides, primarily a carousel and a Cat in the Hat dark ride. I have a hard time seeing this area get taken out, but while Dr. Seuss might be an evergreen source of children’s books, his work isn’t active like it was back when Islands of Adventure launched and Jim Carrey appeared as the Grinch in a hugely successful film. 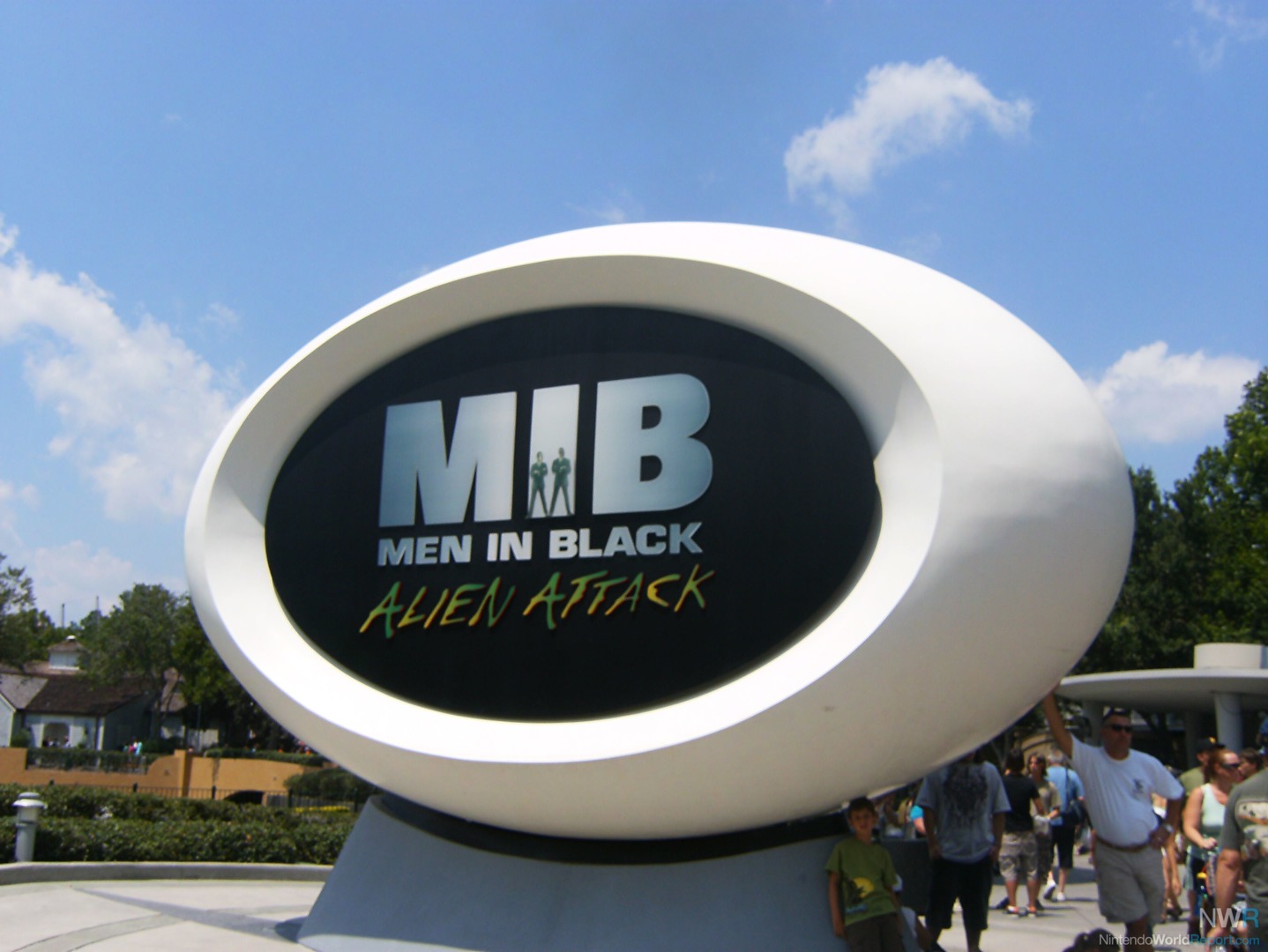 When Men in Black: Alien Attack was added in 2000, the Men in Black franchise was ascending. The first movie debuted a few years prior and the sequel was a few years away from coming out. It was also state-of-the-art with countless animatronic aliens and a ride where passengers were armed with a light gun and competed with each other to shoot enemies. If Nintendo were to take over this area, which is really just the Men in Black ride and some open space, a Nintendo ride could overtake the shooting gallery nature of Men in Black: Alien Attack. Considering the ride is a game itself, it seems like a natural fit. The potential Nintendo-themed area would be constrained, though, as it would be sandwiched between the new Harry Potter area and the expanding Simpsons area. The likelihood of the Men in Black ride being removed is somewhat low considering that the movie franchise is still active. Men in Black 3 hit in 2012, and while it might be a while before Men in Black 4 comes out, it is in development. Just the slow-moving development that is made slower by the fact Will Smith basically calls the shots.

Wherever Nintendo’s new rides fit, it’ll likely be a long time before we see any movement on the construction. As far as we know, Universal and Nintendo’s partnership is in the early conceptual stages, so while there might be a grand plan of where the rides and attractions will fit in, we likely won’t hear about it for a long time. Most likely, we won’t see any official word on the specifics of Nintendo rides for another year or two, with the launch of any Nintendo area upwards of three years away at a minimum.