The Potential for an October Wii U Launch

But the landscape is different now. The DS was a very uneasy proposition. Positioning it in that tried-and-true window was necessary, and wound up working wonderfully. The Wii had great buzz, and was directly competing with the PlayStation 3, so having it come out in that time frame, just two days after the PS3, was the right call.

The Wii U doesn't face the Wii's competitive issue. It isn't being labeled as a third pillar like the DS. This system is the successor to one of the most successful Nintendo systems ever, but it's also following the launch of the 3DS, the successor to Nintendo's most successful system. That 3DS launch, which was traditional and in line with their recent launches despite coming out in March, was very rough. The sting of the drastic price cut, the Ambassador games, and fiscal year loss are clearly still being felt around Nintendo HQ. Company President Satoru Iwata has repeatedly said he doesn't want to see the company make the same mistakes with the Wii U launch that they made with the 3DS launch.

Iwata's hope is why I think there is a possibility, albeit remote, that the Wii U might launch in October. If I were to slap an exact date on it, I'd say Sunday October 28. Just think, the system could launch with Assassin's Creed III (at the same time as other systems), Nintendo Land, Darksiders II, New Super Mario Bros. U, Ninja Gaiden 3, Just Dance 4, FIFA, Mass Effect 3, Scribblenauts Unlimited, Batman: Arkham City, and a few more. 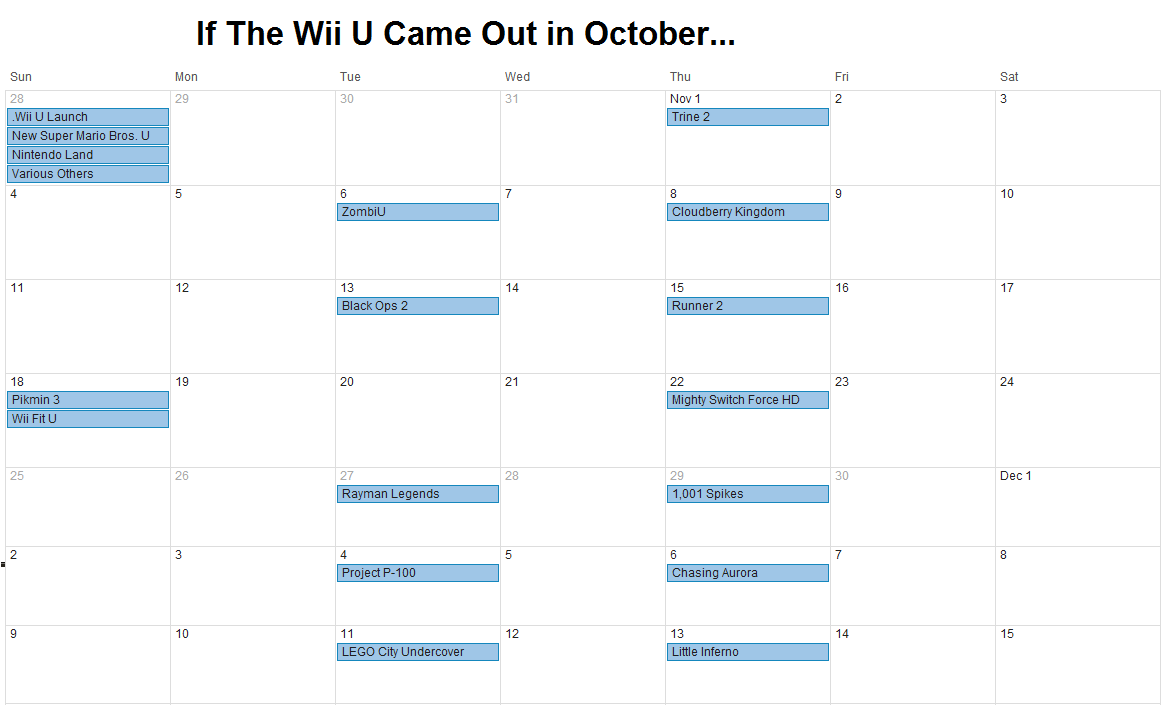 Then, over the next month, there could be a consistent slate of releases. ZombiU could be a mid-November release, alongside the likes of Black Ops 2, which could come out on Wii U day and date with other versions. Pikmin 3 and Wii Fit U could land on November 18, that big Sunday before Black Friday. Project P-100, LEGO City Undercover, and/or Rayman Legends could come out in early December. The eShop could launch with Trine 2, and slowly build up a stable of solid releases every week with Runner 2, Cloudberry Kingdom, and more.

In all honesty, as a gamer, this slower trickle of consistent releases is more appealing to me, and it solves a lot of the issues that the 3DS and Vita faced in the months after launch. It also helps that this fall's slate of releases across Wii U's competitors seems to be lighter than previous years. October appears to be booked solid, but November, outside of massive releases like Halo 4 (November 6) and Black Ops 2 (November 13), appears to be pretty empty.

Then again, November 18 is the safe and predictable day. Nintendo probably won't hurt for launch sales if the system comes out then. My machinations might just be an exercise in futility, but Nintendo is in a spot where they might need to surprise people. This might be one way to do it.

Nintendo is a company that is doing things a little differently now, whether we all like what they're doing or not. Just look to E3 2012. They had three press conferences over four days. Then, two weeks later, they revealed Smash Bros. details and the 3DS XL. What the hell kind of world is that when big announcements aren't always made at E3? 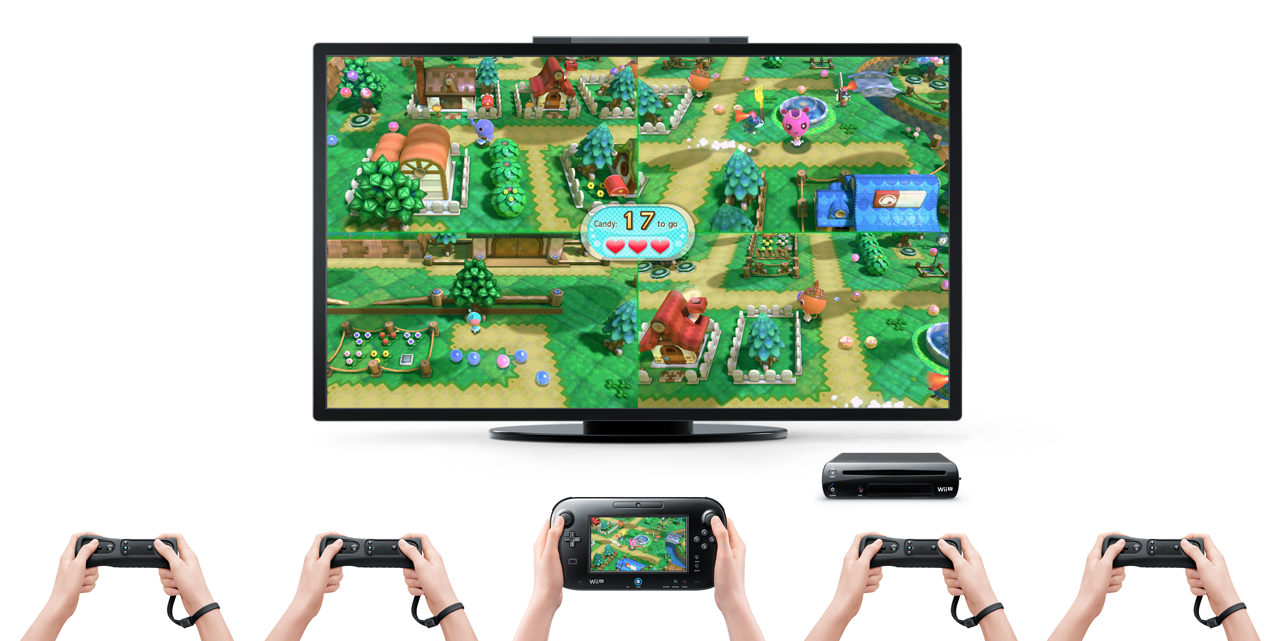 Regardless, we'll find out about the Wii U launch date soon enough. Rumors are swirling over an impending launch announcement for the Wii U, possibly being the focus of a Nintendo Direct later this month. If that happens, the October release date could be a possibility. However, if we don't hear anything in August, I think it's best to write this article off as a dream and get ready for a mid-September reveal of a November 18 launch date.

Neal, this makes too much sense to be feasible. But I hope to heckfire you're right. They need to pump this baby out in time to have other big HD game releases available on WiiU day-and-date. Otherwise, 90% of players will buy CoD and Assassin's Creed on PS360, WiiU versions will sell poorly, 3rd parties will think platform isn't viable for their games, and the dreaded cycle will continue.

Even if the console launches in Nov., it would be nice to just get price and date sooner rather than later. I really doubt there are any people who are thinking: "I have to wait another 3 months. Forget that, I'll just buy an Xbox instead." The 3DS price cut must have really spooked them to take this long to figure out what to sell the system for.

People were talking about Wii U being out earlier in the year. Most of what we've heard insinuates that the system is more than ready to go. Outside of the GamePad being difficult to produce, if manufacturing capacity is why it'll come out in November compared to October, there might be larger issues.


EDIT: Naturally, minutes after writing this, I see something talking about how Wii U might be hitting a December release in Europe because the GamePad production is challenging. Well, there goes my caveat.

Huh. I'm surprised that this is the same as the last couple launches. In my mind, it felt like we knew the date and time further back then that. Although most rumors and speculation on the Wii price and launch date were pretty much spot I think which may have contributed to the feeling of knowing it sooner.

That is literally the most inane thing I've heard all week.

This is funny that this came out soon after the CVS report on Europe's date "slipping" to December because the tablet manufacturing problems. I guess some online stores put up November 14th as the release date in Europe yesterday. So it kind of supports that they may be having problems with the tablet but Europe will a few weeks later and they will release the Wii U in late October in Japan/US. So that means they will probally have their unveiling the last full week of August if they conform to what they did with the Wii


The second coming of the SNES is nearly upon us and not a moment too soon.