Of Nerds and Men: Inhalation

It’s something of a Kirby week here at Nintendo World Report. You should do yourself a favor and relive a few of the pink puffball’s excellent games. While the “canon” Kirby games tend to be simplistic, they are nonetheless engaging and provide a sort of “gaming comfort food.” I always enjoy playing Kirby games to varying degrees, but my favorites remain highly ranked. Aside from offering standard platforming shenanigans, Kirby is also arguably Nintendo’s most experimental franchise—probably because our boy can so easily transform into a ball. But even apart from that, even the platforming games try new things with zealous enthusiasm. Let’s review.

Being the old-timer I am, I remember when the original Kirby’s Dream Land came out on the Game Boy Brick. I owned a copy and I played it a lot—unlocking the game’s impressive Hard Mode was a joy. Unfortunately, today Kirby’s Dream Land can be conquered in about a half-hour. Still, the game and its characters were new and charming. Kirby’s ability to fly and suck up enemies (only to spit them out at other baddies) was a novel idea at the time. Of course, Nintendo must have realized it had something special on its hands when Kirby’s Adventure came out for the NES. I played the balls out of this game, and have repurchased it at every available opportunity. 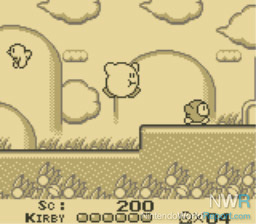 Did I mention Kirby can fly? Like, forever? *head explodes*

Kirby’s Adventure is a huge game with varied environments, lots of secret areas, and a brand-new ability that would become integral to the series: the power to inhale enemies and copy their powers. This ability proved critical for finding the game’s many secret doors and switches. Kirby’s Adventure also introduced a bevy of mini-games, the antihero Meta Knight, and a difficult final boss, the Nightmare. Kirby’s Adventure is packed with content, and I love going back to it. The 3D Classics remake for 3DS eShop is especially fantastic.

And then we get to Kirby’s first spin-off game: Kirby’s Pinball Land. It was an easy transition, since Kirby is already a ball-shaped character. The game set a high standard for handheld pinball games, but it hasn’t aged particularly well. For one thing, Kirby can’t absorb powers (an oversight that would be remedied in Kirby’s Block Ball). For another, he seems magnetically attracted to each board’s side gutters. While the methods of progressing through each pinball board were imaginative, Pinball Land’s underlying physics makes it more frustrating than fun today. However, I daresay that without this important game, we wouldn’t have such excellent handheld pinball games as Pokémon Pinball: Ruby & Sapphire, and Metroid Prime Pinball. 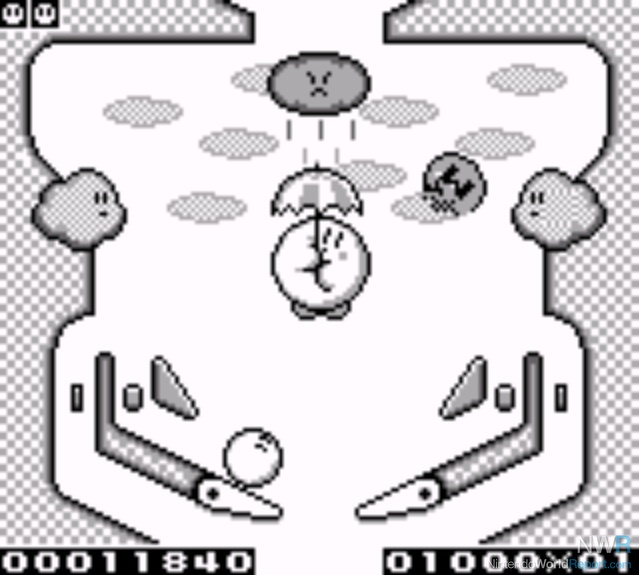 This game is SO META.

Kirby’s Dream Land 2 expanded upon the standard set by Kirby’s Adventure. Suddenly, Kirby had three animal friends who, in addition to having their own unique abilities, modified the way Kirby used his inhaled powers. Finding the Rainbow Drop collectibles often required a specific animal/power combination. Kirby’s Dream Land 2 was also one of the first Game Boy games to boast Super Game Boy support—custom colorizations and a unique border. This is probably my second-favorite Kirby game, as it boasts variety and interesting puzzles. 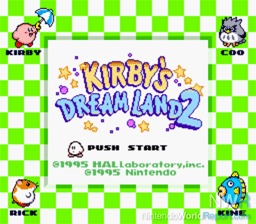 The Super Nintendo saw three Kirby games: two traditional platformers and one spin-off title. Kirby’s Dream Course took another swing at the “Kirby as a ball” gameplay by turning him into a golf ball. The game takes place on an isometric, pseudo-3D green. Your goal is to knock Kirby into all the enemies on the field and then into the hole. As in any golf game, you set power, direction, and spin to move Kirby around the green. He can absorb enemy powers by smacking into enemies with them, and these powers are often critical to finishing the course. Based on your performance, you can earn medals, which unlock new features in the game. Kirby’s Dream Course is a little strange, but it’s fun, and has a two-player mode. I have it on VC but haven’t touched it in years. 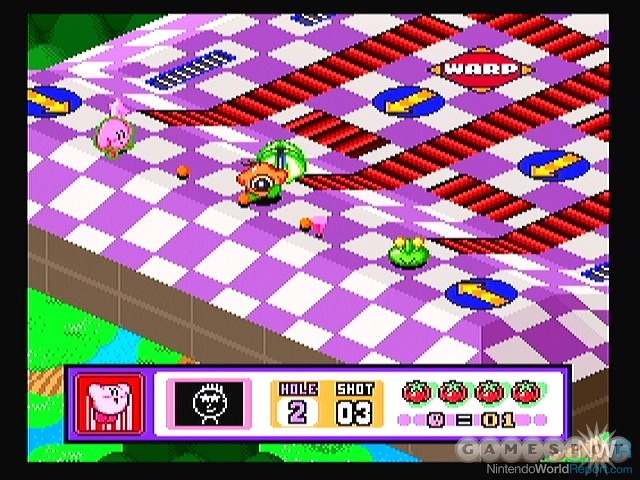 Some of the holes become a little too Rube Goldbergian for my tastes.

Another of my favorite Kirby games, Block Ball, came out the next year, and I snatched it up right away. It’s basically the Kirby version of Arkanoid, but gives Kirby the ability to absorb enemy powers and use them to up the score in each stage. Unlike Pinball Land, Block Ball has aged very well and remains one of my go-to games on 3DS Virtual Console.

I remember the next two SNES Kirby games very fondly: Kirby Super Star is perhaps the best-known Kirby game. It features seven platforming games of varying length and complexity and three mini-games. In most of the games, a second player can take control of a “Helper” character. The games range from Spring Breeze, a prettied-up version of Kirby’s Dream Land, to The Great Cave Offensive, which is a Metroidvania-like scavenger hunt. I loved Super Star and played it with my brother all the time. There was always one treasure in the Great Cave Offensive I could never get, and I’ve never tried since. I should go back to that game. It’s available on plenty of platforms now—DS, Virtual Console, and the Dream Collection.

The next year, we got a more traditional game: Kirby’s Dream Land 3. The game is essentially similar to its predecessor, but adds three more animal friends and borrows Super Star’s optional second player (a blob named Gooey). Instead of finding Rainbow Drops, Kirby ‘n’ Friends must complete a vaguely defined quest in each stage. The most amazing thing about Dream Land 3 is its visual style: hand-drawn in the vein of Yoshi’s Island, with beautiful pastel colors and wonderful animations. I used Nintendo Power to complete all the quests back in the day, as doing so unlocks an excellent final boss fight that, given the rest of the game’s happy tone, is a little disturbing. I have this on Virtual Console and I keep meaning to replay it. 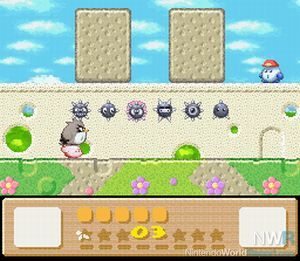 This game is so damn pretty.

Three years later, on the N64, I marveled at Kirby 64. It was a beautiful blending of 2D platforming and 3D environments, but was by no means “2.5D.” Aside from the polygonal visuals, Kirby 64 made an interesting change to Kirby’s move set: while there were but seven unique powers, Kirby could combine any two of them, which means there were really 49 powers. Specific combinations were used to find the game’s Crystal Shards (similar to Rainbow Drops). Sometimes, the challenge was to find the right combination and then hold onto it during the length of a stage. Once in a blue moon, players took control of King Dedede through sections of certain areas, which was a lot of fun but incredibly rare. Kirby 64 also includes the series’ most epic final boss fight. While I wouldn’t call this one of my favorite Kirby games, Kirby 64 is certainly inventive, and the graphics hold up fairly well for an N64 game.

After Kirby 64, the series started splitting into lots of different directions—I didn’t play too many of them. I missed out on Tilt ‘n’ Tumble, Kirby Air Ride, and the Amazing Mirror, but I played Nightmare in Dream Land and loved every second of it. Why wouldn’t I? It was a remake of Kirby’s Adventure that included the ability to play as Meta Knight, who controlled differently and only had three health bars instead of Kirby’s six. When I picked up my original DS, I also grabbed Kirby’s Canvas Curse, which I loved. It remains one of the most inventive uses for that second screen. Once again reduced to a ball, players used the stylus to draw platforms and ramps for Kirby to move through each stage, defeating enemies and collecting medals. Collecting enough medals unlocked new balls (which tended to have different physics): Waddle Dee, Meta Knight, and even Dedede! I love Canvas Curse, and I wish somebody would make a sequel. I unlocked every unlockable in that game and played through most of the stages with all of the characters. I’m not sure what I did with that game—I wish I still had my copy. 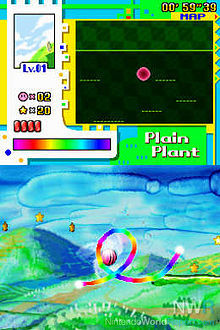 After that, I missed out on Squeak Squad and Super Star Ultra (I’ve got the original!), but I did play Kirby’s Epic Yarn after becoming entranced by the visuals and hearing nothing but good things from Neal Ronaghan, who famously gave the game a 10—based largely on the fact that he was smiling from ear to ear while playing it. I liked the game, but it really overstayed its welcome, and being the completionist I am, I just had to play 100 percent of the multitude of mini-games, which was exhausting. I picked the game back up this year but found it hard to get back into. Epic Yarn is slow moving, and the visuals, while charming, can’t carry the entire game. The two-player mode is fun, though. But again, Epic Yarn is extremely experimental, messing with the visuals and even the core combat mechanics: Kirby whips things instead of inhaling them, and he doesn’t copy powers. Instead, he goes through Yoshi’s Island-like transformations into other forms for brief intervals. 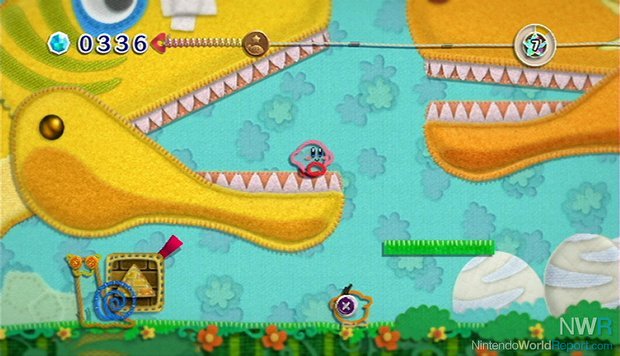 Yes, there's a dinosaur stage in Epic Yarn. But that's just ONE STAGE. And they're really not scientifically accurate, either.

After that, I sadly missed out on Mass Attack and Return to Dream Land, although neither piqued my interests all that much. I do want to grab the Dream Collection someday, because it includes a lot of my favorite Kirby games in one package. Of course, I’ve picked up every Kirby game that’s been released on the 3DS eShop. Like I said before, the Kirby games are something like comfort food to me—never all that challenging, but fun nonetheless, and usually inventive. I can’t wait to see where Kirby goes from here!