You know the Beyblade games suck, but what about the TV series?

As I mentioned in my review of Beyblade: Metal Fusion - Battle Fortress for the Wii, I have a fondness for cheesy, Japanese shows based around the "it" game of the month. I just love how campy and over dramatic they can get, especially if the game in question is as childish as they come. Beyblade: Metal Fusion is the latest graduate of this school of thought, using fighting tops as its reason of being... on store shelves around the world. The Wii game comes with a DVD featuring one episode of the TV series currently airing on Cartoon Network. It serves as an introduction to the series and its characters, and yes it is a lot of fun... for me anyway.

The episode begins with a recap of the previous chapter. Considering that this is meant to get kids (and maybe the occasional lonely nerd... *points to self*) excited for the series, I think the first three episodes would have served a better purpose than just an episode picked at random. Anyway, the title of this episode is called “Merci's Dangerous Trap”. Just who or what is Merci? You'll find out soon enough. 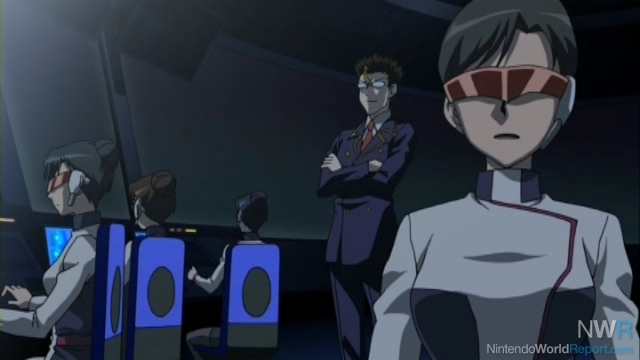 As soon as the episode starts, we get a glimpse of the series's big bad, a man dressed in a “smart suit” (as the Wii game beautifully called him) running a couple of tests on a Beyblader called Kyoya. Oh yes, I forgot to mention. In the Beyblade world, Beys are so important that Bladers have to train both physically and mentally just so they can get in sync with the spirit of the fighting tops...

I'll just let that sink in for a bit...Ready? OK! Kyoya is the series's rival that eventually becomes a part of the main cast, but keeps the rivalry very close to his heart. He begins his training by facing a holographic version of Gingka, Beyblade's main character and all around nice guy, if very doofy. We then cut to a Beyblade shop called the B-Pit, run by the smart girl of the franchise, named Madoka. During this scene we also get to meet two more archetypes: Kenta, the young apprentice and sidekick, and Benkei, the bully/comic relief guy. There is nothing subtle about Benkei, and because of that, he is my favorite character in the series. Since his Beyblade is Taurus, his behavior tends to be that of a bull, which leads to some comical mannerisms. He even teaches kids how to properly scream at their Beyblades! 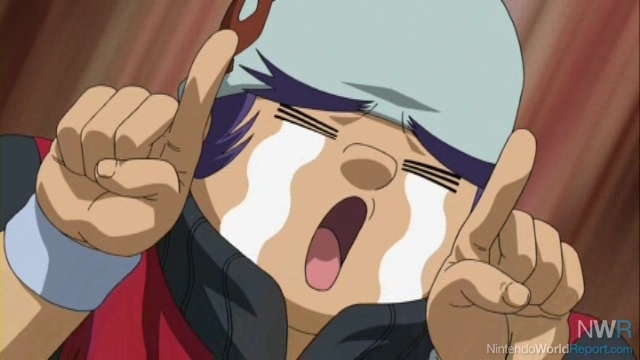 Because, you know, being the fat guy means that your misery is the amusement of others

We cut back to Kyoya and Smart Suit Man in an helicopter ride. They have the usual speech about how Kyoya must defeat his enemies and prove his worth to the world, yadda yadda yadda. But what happens next really becomes the stuff of legends. Smart Suit Man tells Kyoya that in order to become strong, he must endure intensive training... in the form of jumping into a canyon, climbing back, and then surviving the harsh environment for a couple of days. All of this is for fighting tops, people! 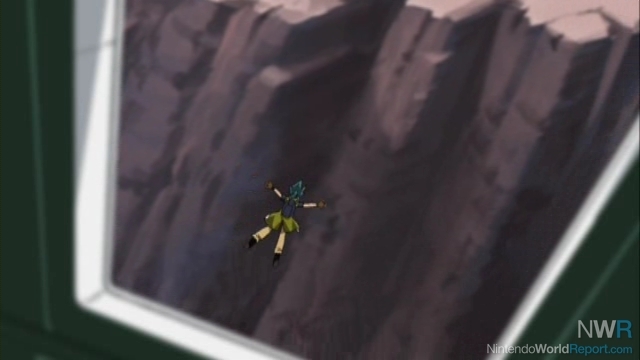 My Beyblade gives me the power to defy gravity! 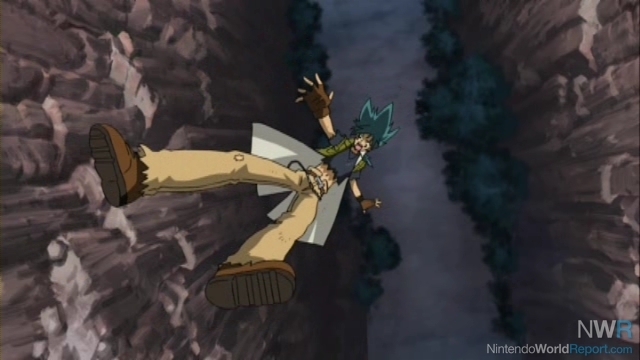 After we see Kyoya valiantly plummeting into victory, we are taken back to Gingka and friends once more where we learn an important piece of information about him, and that is that he needs to go to the bathroom. He goes to a portable toilet where something amazing happens... THE TOILET IS ACTUALLY A SUPER COMPUTER THAT KIDNAPS GINGKA AND FORCES HIM TO PARTICIPATE IN TESTS JUST TO STEAL HIS DATA! 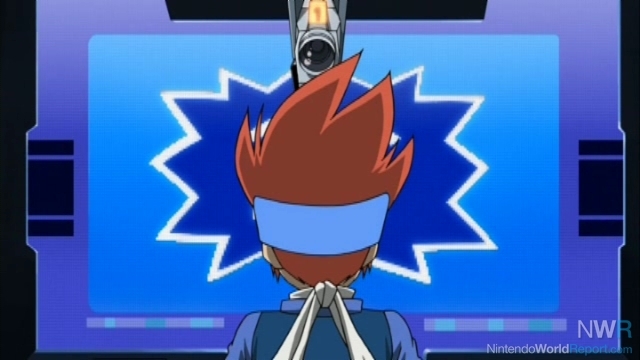 Ceiling camera is watching you pee 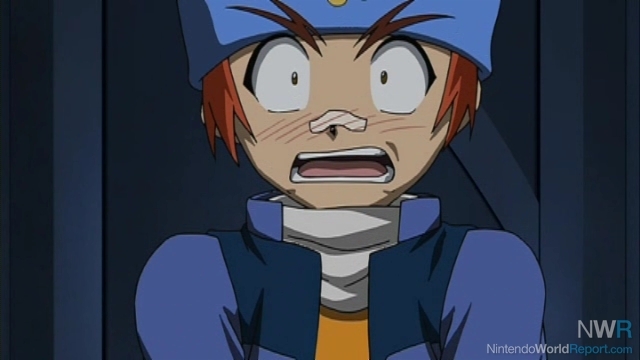 Needless to say, I am never trusting portable toilets again. And what is this computer's name, you ask? Merci. Oh yeah, he makes HAL look pretty tame thanks to his deadly French monotone.

Meanwhile, Kyoya is struggling to climb the mountain, but the idea of him defeating his dreaded rival is enough motivation to survive even a pack of hungry wolves. Luckily, Beyblades also serve as weapons in this anime universe, so Kyoya manages to defeat them by creating a whirlwind that blocks their path. 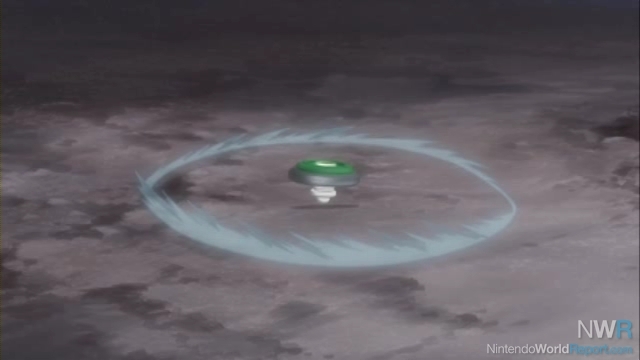 Psh, a top? How is that supposed to be useful? 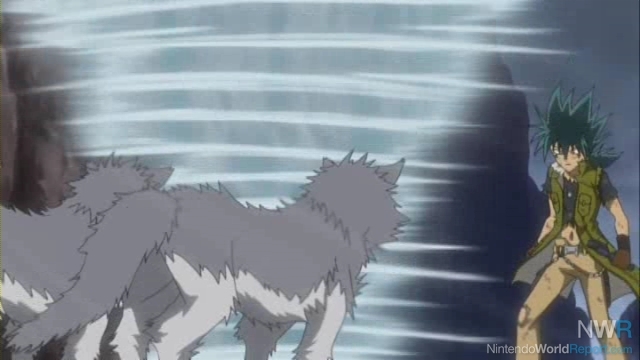 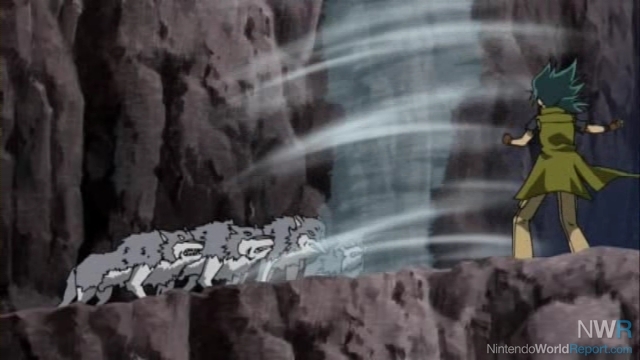 And children are allowed to walk around with these weapons of mass destruction?????

To recap all of this, we have seen that in this world of hardcore tops, individuals must go through rigorous training sessions involving diving into canyons then climbing back up and fighting its wildlife. They also must deal with evil computers who drive unsuspecting children into their traps by the allure of instant physical relief.

How can you NOT enjoy this series??? 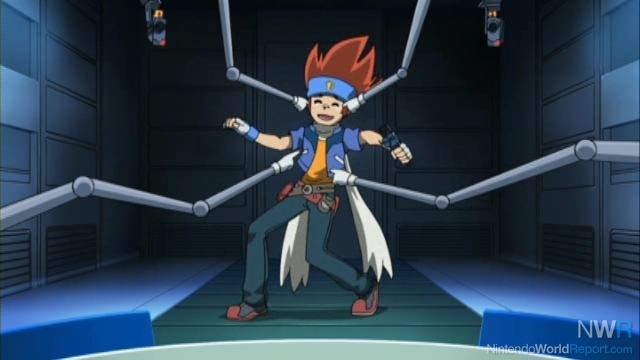 The episode ends with Gingka successfully completing all of Merci's tests (which included tickle torture, running away from a wall of spikes, and battling against giant tops) and Kyoya coming out on top of the world, quite literally. This is the sample episode in a nutshell. I realize that anyone over the age of 10 will not get this series. It is primarily a tool to get kids to buy the toys and create their own plastic top adventures. But for me, it is so outrageous at times, it comes off as a parody of series like Yu-Gi-Oh and Bakugan, rather than a serious attempt at creating a mythos for this franchise.

I loved this sample episode so much that I went ahead and DVR'd the episodes currently running on Cartoon Network. It's the first thing I watch every morning when I wake up. Yes, I have no shame in admitting that :D 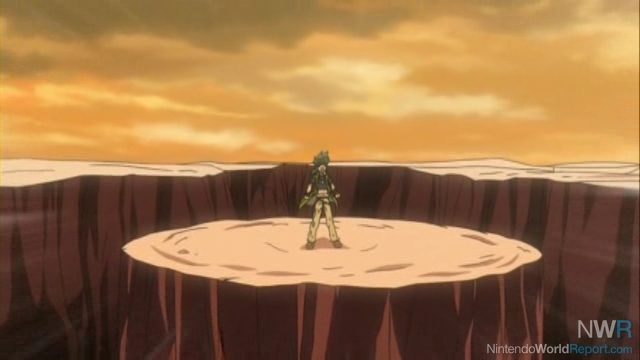 GINGKA! ONE OF THESE DAYS I WILL PROVE MY MANLINESS TO YOU VIA A CHILDREN'S GAME OF FIGHTING TOPS!

Back when TV shows were selling merchandise like Transformers or Power Rangers the writers had it easy. Pokemon may be a bit more challenging but they're still dangerous animals with super powers but I pity the writers who have to sell cards or spinning tops to children. Hell, Custom Robo had believability problems and that was a game about mech combat! What's next, an anime about pogs?

I am so glad that Beyblade Abridged exists.

Lol, what a ton of nonsense xD, I was never a big fan of beyblade, I prefered watching Medabots, now those are toys I would really love to have. Also, are this series connected to the original series in any way? (well duh other than the toys xD)

@Shaymin: Funny you should mention Beyblade Abridged. When writing both the review and this blog I tried to make it all sound like an Abridged episode, most specifically Yu-Gi-Oh Abridged and DBZ Abridged. The series is that easy to make fun of, but I feel the series is already doing that by itself.

@TheMexicanSnob: I don't know if this new series is in anyway connected to the original Beyblade series. But, this seems to be a relaunch of the franchise as a whole since I don't recall being around for a couple of years until Bakugan was introduced a few years back.